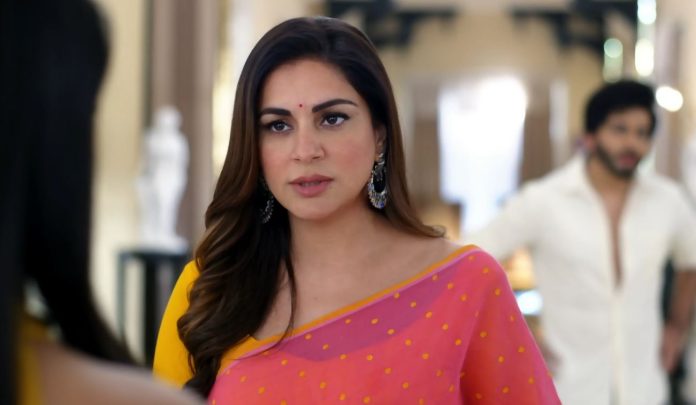 Kundali Bhagya 7th January 2022 Written Update Jealous Preeta Karan collides with Natasha, who falls in his arms. Preeta watches them. She gets rude towards Karan. Natasha comes to support Karan. She calls Preeta wrong. She tells that Preeta talks to Karan well behind their backs, and she gets alienated seeing the family in front. She adds that Preeta shouldn’t insult Karan this way. Preeta asks Natasha why is she supporting Karan. She tells that she doesn’t know Natasha well, who is talking between Karan and her. She asks Natasha is she interested in Karan. Karan gets smiling in a naughty way. He thinks to take Natasha’s help and make Preeta jealous. He wants Preeta’s love back in his life. Will Karan succeed? Keep reading.

Earlier in the show, Preeta meets Shrishti and updates about the Luthra family. Preeta tells that Karan is okay, he lost confidence, but still shows attitude, he loves her. She doesn’t want to explain mistakes to anyone. She just wants Luthras to get saved from Prithvi. She tells that she will leave once she saves the family and restores their lost pride.

She didn’t forgive Karan. She doesn’t want to forgive him. Shrishti recalls her last meet with Sameer, when she defended Preeta. She regrets that he didn’t trust Preeta, and this led to their breakup. She tells Preeta that she isn’t talking to Sameer. Preeta asks the reason. Shrishti doesn’t want such people in her life who can’t take a stand for relations. Preeta cries knowing about Shrishti and Sameer’s breakup. Shrishti tells Preeta that she is always there for her. The sisters hug.

Shrishti tells Preeta that she will come anytime to help her. Preeta hugs her. She tells Shrishti about Prithvi’s message. She asks Shrishti not to worry. She is sure that she can handle him. She wants Shrishti to look after their family. Bani asks Karan to have sweets, because he has won over Preeta. Sameer advises Karan to leave, else everyone will ask him to scold Preeta in front of them. Bani stops Preeta. She tells that nobody loves her in the Luthra family.

Preeta tells that its not a big thing, she didn’t give to receive or give love to anyone. She adds that she has many other things to do, its more important than this daily drama. Kritika asks Preeta to talk to them well. She tells that Karan doesn’t love Preeta, he will not apologize to her. She asks Karan to tell Preeta that he cleared the misunderstanding. Karan stops the family. He asks them to forget the matter. Bani tells that she wants him to scold Preeta. She dislikes Preeta’s attitude.

Natasha asks Preeta to keep her manners. Preeta asks Natasha to learn manners first. Bani tells that Preeta needs a scolding. Karan tells that he will scold Preeta later. Preeta tells that she is sorry, she can’t waste time on them. Karan tells that Preeta got scared of her and left. Kritika asks him why didn’t he scold Preeta. Bani tells that Karan broke their hopes. She asks Karan to warn Preeta if he wants his Dadi to live in peace. Kritika tells that he should do as Bani wants. Karan agrees to rebuke Preeta’s actions. Sameer asks Karan not to go and get insulted.

Karan asks Sameer not to let the family see the truth. He tells that he will fake the scolding. Sameer stops Bani and Kritika. He asks them to stay far and witness the fight. Bani agrees. Karan stops Preeta by a whistle. He talks to her nervously. She tells that she has much work unlike him. Karan tricks the family into believing that he is making Preeta apologize. Bani asks Preeta to not repeat the mistake again. Kritika tells that Preeta needs to apologize again. Karan tells that it was for her misbehavior. Preeta asks Karan what is he doing. Sameer tries to run away. He collides with Rakhi and says sorry. Preeta asks Karan to let her go if his show off is over.

Natasha calls her behavior wrong. Preeta asks Natasha who is she to speak between Karan and her. She doesn’t know Natasha well. She asks Natasha not to judge their relation. She questions Natasha’s interest in Karan. Natasha denies it. Preeta warns Natasha against developing any craze for Karan. Karan gets positive hearing this. Rakhi tells that Preeta talked like a caring and loving wife. Karan is happy. Natasha tells that Karan loves Preeta a lot, he didn’t scold her, he can never scold her. Preeta meets Prithvi. He introduces Naagre to her.

Preeta meets Naagre. Karan and the family follow Preeta. Naagre introduces himself. He recalls that he had declared Prithvi as the new owner of Luthra mansion and business. Karan also remembers Naagre threatening the Luthras and asking them to obey Prithvi’s orders if they want to stay in the house. Karan wanted to leave the house, but was helpless to stay back for the sake of his family. Naagre tells Preeta that he is Prithvi’s lawyer who helped him in taking over Luthras property. He introduces himself and his smart skills. He asks Preeta to call her lawyer and show her documents to get Mahesh’s signatures verified.

He tells that its his right to check the papers. He requests her to show the papers to verify her claim of ownership. He warns Preeta that he can identify the fake documents in a second, if the signatures are fake, then she should pack her bags and come. He threatens to sue her for the fraud. Preeta goes to get the papers. Naagre apologizes for insulting Preeta. Prithvi tells that they shall call the police and throw out Preeta from the house. He tells the high possibility of the fake papers. Karan gets angered hearing them speak against Preeta.

Reviewed Rating for Kundali Bhagya 7th January 2022 Written Update Jealous Preeta: 4/5 This rating is solely based on the opinion of the writer. You may post your own take on the show in the comment section below.