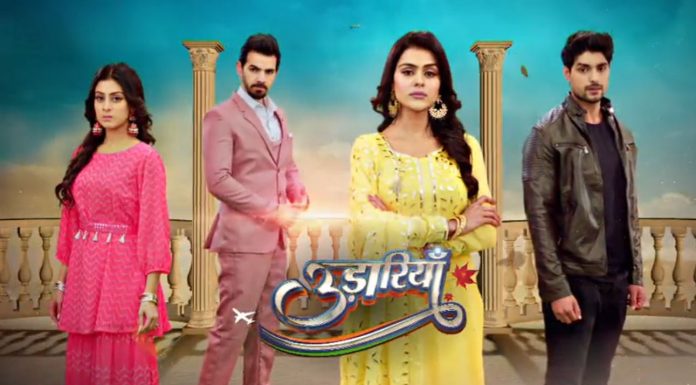 Udaariyaan 7th January 2022 Written Update Unexpected Brawl Rupy begs Jasmin to spare Tejo. He tells that whatever wrong had happened with Jasmin, Tejo isn’t responsible for it. He tells that Fateh is responsible for her sorrow. He knew everything about Fateh and Jasmin, but didn’t tell it to Khushbeer, who was sobbing for his son. Khushbeer wants to ask Rupy why did he hide such a big thing from him. He goes to meet Rupy. He asks Rupy the reason for keeping the secret. He meets Rupy and family. He asks Rupy how did he hide such a big truth from them. Rupy tells that Fateh had come home to confess his fraud. He adds that Khushbeer has no right to support a fraud person. Khushbeer argues with him to defend Fateh.

He tells that Fateh isn’t fraud, its Jasmin who cheated Fateh and everyone. He gets angry that Jasmin was having an affair with Fateh, knowing he is Tejo’s husband. This statement rages Rupy. Rupy yells at Khushbeer. Khushbeer shouts back at Rupy and holds his collar. Both the family members try to intervene to stop the fight, but the fight gets more loud. Tejo and Fateh come home at the same time and find their families into a huge brawl. They attempt to bring peace and harmony in the relation again. Will Angad take an advantage of this family feud and get Rupy on his side? What is Jasmin planning against Fatejo? Keep reading.

Earlier in the show, Rupy confronts Jasmin. He asks Jasmin to spare Tejo, and take her revenge on Fateh, who broke her dreams. He asks Jasmin to hate him if she wants, but not Tejo. He tells that Fateh is the reason for all the mess, Tejo is innocent. He tells her that Fateh has told him the truth on the wedding day itself. He asks her not to blame Tejo, she got punished for her own sins. He reprimands her, while Simran hears the truth. Simran goes home and tells the family that Rupy was aware of Tejo and Fateh’s truths, but hid it from them. Khushbeer and Gurpreet get too upset. They want an answer from Rupy.

Khushbeer is very hurt that Rupy had hid such a big thing. He didn’t imagine that Rupy will backstab his trust and hide about Fateh. He remembers how he used to share his pain with Rupy, who never told him the truth. He wants an answer from Rupy. Fateh and Tejo get into a sweet moment in the college staffroom, when he helps her in need. Tejo doesn’t want to show him that he means to her. She stays rude towards him, but his motto is to win her heart. He keeps his love and patience in handling her.

Khushbeer reaches Rupy to confront him for hiding the truth. He tells that Rupy should have told the truth about Fateh, after seeing the Virk family sinking in sorrow over losing Fateh. Gurpreet also rebukes Satti for not pitying them on seeing them cry for Fateh. Khushbeer asks Rupy the reason for hiding everything, like he took revenge on Fateh. Rupy hates Fateh who has cheated Tejo and Jasmin also. He tells that Fateh has given just sorrow to Tejo, he is responsible for all the wrong. He adds that he chose to keep the truth a secret for the betterment of Tejo, because he thought she is moving on with Angad.

He didn’t know that Tejo and Fateh will cross paths again. He tells that his decision was justified, he doesn’t care for Fateh. This angers Khushbeer, who loves his son a lot post his repentance. Khushbeer takes side of his son and insults Jasmin who is the root of all the problems. Khushbeer and Rupy get into a heated argument, while Mahi informs Fateh of the bad happening. Fateh and Tejo learn about the fight and rush home to stop their elders. They don’t want their families to fight and spoil their terms.

Tejo and Fateh explain the families to bring them to a calm. Fateh tells Khushbeer and Gurpreet that he made Rupy swear that this secret will be a secret. He adds that Rupy isn’t wrong. He accepts his mistakes. He tells that he just wanted to see Tejo happy with Angad, so he decided to go away from everyone’s lives. He apologizes to his family. He clears Rupy’s name. He sends his family home, and apologizes to Rupy. Rupy warns him to stay away from Tejo. Fateh later talks to his family and defends Rupy, who kept this secret on his saying. He tells that Rupy also wanted Tejo’s happiness, he can’t be blamed. Khushbeer is still upset that Rupy didn’t use his mind and hid such a big truth.

Fateh wishes Khushbeer forgives Rupy. Even Tejo attempts to make Rupy calm and make him forgive Khushbeer for the fight. She tells that Khushbeer is right on his front and they shall apologize to him. Rupy doesn’t want to apologize. He feels he didn’t do anything wrong. Fateh and Tejo attempt to unite their family back. Simran feels guilty that she is the reason for all this clash. Later, Tejo meets Khushbeer and apologizes to him on Rupy’s behalf. He asks her to just forgive Fateh if possible, then all the complications between their families ties will end. He tells her that he wants to see her with Fateh. Tejo doesn’t think this is possible. He requests her to forgive Fateh. Angad returns in her life. What twists will Angad bring now? Keep reading.

Reviewed Rating for Udaariyaan 7th January 2022 Written Update Unexpected Brawl: 4/5 This rating is solely based on the opinion of the writer. You may post your own take on the show in the comment section below.