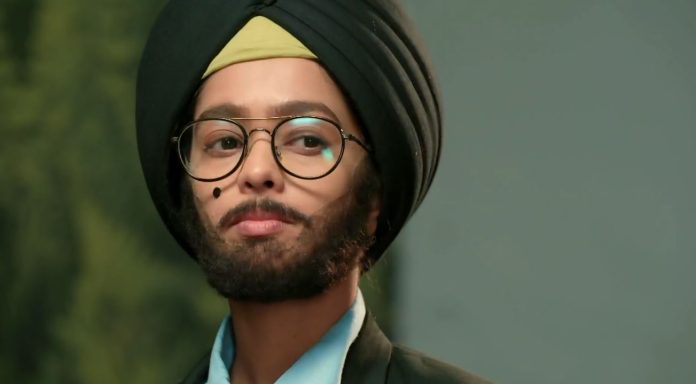 Kumkum Bhagya 10th January 2022 Written Update Prachi disguised Prachi grows worried knowing Rhea has hidden the original guilt admittance papers signed by her. She wants to find a way to get the papers. Shahana asks Prachi to give some good idea by which she can prove her smartness and also tackle Rhea’s evil. Prachi tells that she is brainstorming to find a way, but isn’t sure. Shahana asks her to control Rhea. Prachi worriedly tells that her mind has stopped working, she isn’t getting any idea. Dida relieves Prachi’s worry. She tells that she has an idea, though its weird, it might work.

Rhea asks them who are they and how can they enter the house without permission. Pallavi and Vikram stop Prachi from entering the house and question her. Prachi tells that she has come from IT department. Kohlis are shocked. Prachi asks them to cooperate if they are innocent and have nothing to hide. Rhea follows Prachi who goes to her room to get the papers. Will Rhea catch Prachi red-handed, or will Prachi succeed in stealing the papers? Keep reading.

Prachi understands Dida’s plan. Dida tells them that they will raid the house and then get the papers from Rhea’s room. Prachi is tensed. Shahana tells that they can’t play the IT officers. Dida asks them to take a disguise, barge into Rhea’s room and steal the papers. Vikram cancels his important meetings. He tells Pallavi that they are making some mistake. She asks what does he mean. He tells that they did wrong to get Prachi’s signatures that day. He explains that he isn’t able to think well, he started feeling Rhea is wrong and Prachi is wrong. He tells that he should better go to office and divert his mind.

He asks her to take care. She worries on hearing him. Aaliya meets Pallavi and tells that she is going home. She asks Pallavi why is she worried. Shahana and Prachi find the plan weird and less predictable by Rhea. She asks Prachi to go ahead with this plan execution. Prachi tells that Vikram and Ranbir are educated, they know the raid laws well, they will not let the officers enter the house. Dida tells that the raid will happen at the time when Vikram and Ranbir leave for office in the morning hours. She assures Prachi that she will handle everything.

Pallavi tells Aaliya that everyone in the family is good-hearted, Vikram has started seeing Rhea’s flaws, because of Prachi. Aaliya asks did he say this. Pallavi tells that he didn’t say, he thinks Rhea did wrong by taking Prachi’s signatures by spiking the drink. Aaliya tells that he seemed fine when Rhea and Prachi had an argument. Pallavi tells that Vikram can start supporting Prachi, they have to oust Prachi soon, if Vikram gets convinced that Prachi is right, then Ranbir will also go on Prachi’s side. Aaliya tells that they will change Prachi’s fate, Prachi will be out soon, Rhea has gone to Prachi’s room to pack her bags.

Pallavi asks Aaliya to stay with them until Prachi gets ousted. Aaliya tells that Prachi will be thrown out tomorrow. Rhea meets Prachi to taunt her. She tells that she will also gossip with her sister, who would be leaving tomorrow. She tells Dida that Prachi is leaving soon, Dida shouldn’t get emotional. She packs Prachi’s bag. She asks Prachi to leave the house. Prachi stops Rhea. She asks Rhea to leave her bag. Rhea asks Prachi to just get out. After an argument, Rhea asks Prachi to stay for the night and leave in the morning. She advises Dida not to cry for Prachi so much.

She tells that she will allow Prachi and Dida to meet outside the house. She asks them to continue the farewell party. Prachi tells that she will execute Dida’s plan. Dida tells that they shall start the plan after Ranbir leaves for office. Shahana asks Prachi isn’t she feeling lonely in her pregnancy. Prachi tells that the baby is her strength, she doesn’t feel lonely at all. Prachi misses Ranbir. She wishes he was with her. Ranbir arrives home from the office. He finds Prachi crying and goes to wipe her tears.

Reviewed Rating for Kumkum Bhagya 10th January 2022 Written Update Prachi disguised: 4/5 This rating is solely based on the opinion of the writer. You may post your own take on the show in the comment section below.