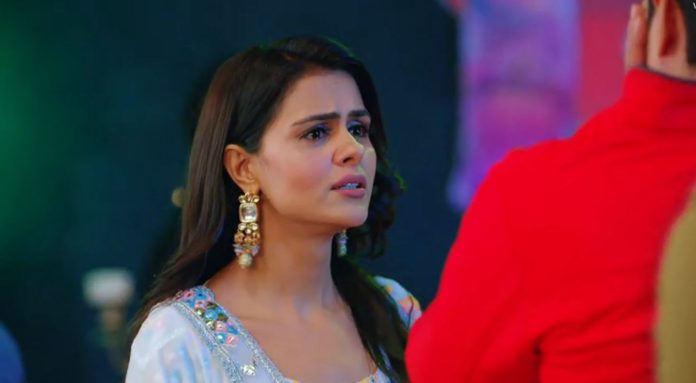 Udaariyaan 9th January 2022 Written Update Tejo slaps Fateh Fateh gets another rose and a love note for Tejo to please her. Jasmin comes to block his way once again. Jasmin tells Fateh that she will give him such a surprise that will leave him shocked. She asks him to be ready. She tells that she will not let him stay happy. She tells that he loves surprises, he will also like this one, but he should stay afraid. Fateh really gets afraid thinking she will be harming Tejo. Tejo receives the rose and poetic note from Fateh. She loses her cool and goes to confront him. Fateh meets Buzo at the club. Tejo arrives there and slaps Fateh in a fit of rage. Fateh is shocked by her behavior. Why did Tejo slap Fateh? What is Jasmin going to do? Keep reading.

Earlier in the show, Fateh stays around Tejo as her protector. Tejo learns about Fateh’s presence and help. She doesn’t mind his presence, which gives him a positive hope that she will soon forgive him. Angad meets Jasmin, and tells that he is helpless to join hands with her because of Tejo’s refusal. She asks him to help her in her planning which will leave the entire family shocked. She wants Fateh and Tejo to get a heavy dose of drama. She tells Angad that she has planned an accident which he has to get executed. He tells her that even he has planned to surprise Tejo and her family. Both of them get wicked to get their goals fulfilled. How will Angad and Jasmin break apart Fateh and Tejo’s relation? Keep reading.

Tejo gets Fateh’s surprise. She doesn’t get happy seeing the rose. He waits outside to see her reaction. Tejo recalls the way he had broken her heart by divorcing her. She angrily throws the rose in the bin. He doesn’t lose hope when he finds the rose in the bin. He thinks her anger will subside one day if he keeps patience and tries to win her heart. He tells that he will bring a rose for her until the day she forgives him. Jasmin pities him for failing to get Tejo’s love. She reminds him that he used to love her before. She tells him that she regards him her biggest’s enemy.

She tells that Tejo has made him a fool in love. She laughs at him. He advises her to stay away from Tejo. She tells that she studies in the same college, she will make sure that she ruins Fateh and Tejo’s lives. She blames him for making her so different than before. She tells that he has forced her to change herself. He asks her not to forget her crimes. He feels she befooled him, she is a clever girl who conspires too well. She threatens him about her upcoming surprise. He doesn’t care for her, but gets worried for Tejo. Fateh imagines Tejo with him, and thinks he has won her love and forgiveness.

He wishes his dream gets true. He gets to meet Buzo in the bar. He learns that Buzo wants to marry Simran but is scared of Khushbeer. Buzo has no courage to take the alliance for Simran. Fateh tells that he will talk to Khushbeer and beg him to get Simran married to Buzo. He tells that he will convince Khushbeer some how. Buzo doesn’t want to go to meet Khushbeer in a drunk state, knowing he will leave a really terrible impression this way. Fateh forces him to come with him.

Buzo worriedly falls Tejo for help. Tejo is in dilemma over going to help Fateh. She doesn’t want to forgive Fateh so soon. She gets helpless by her heart and reaches Fateh. She finds Fateh forcing Buzo. She slaps Fateh. She gets him to senses. She asks him if he will go to Khushbeer in drunk state and talk about Simran and Buzo’s alliance. She tells that Khushbeer won’t agree this way.

She tells him that he doesn’t understand relations, he is a selfish person who just thinks of himself than the family. She tells that he can’t ruin relations further. She advises him to become a responsible person for the family and learn to join relations. She hints him that he can win her heart once again if he wins her family’s heart. Fateh understands the hint of love hidden behind her anger. He thanks Buzo and hugs him. He tells that Buzo did right to call Tejo, she had come and proved that she cares for him. He wants to become deserving of Tejo.

He gets more hopeful recalling the hidden hint in her words. He decides to win her family first and then win her heart. He makes a plan to celebrate Lodhi with Sandhu family. He decides to unite Virk and Sandhu families, so that Tejo gets happy and forgives him. Khushbeer refuses to go in the Lodhi event, saying he can’t answer the people about Fateh and Jasmin’s fake marriage. He adds that he wants to avoid Rupy and Sandhus. He asks the family to go and celebrate Lodhi if they want to. He doesn’t want anyone to force them. Fateh struggles to unite the families.

Reviewed Rating for Udaariyaan 9th January 2022 Written Update Tejo slaps Fateh: 3/5 This rating is solely based on the opinion of the writer. You may post your own take on the show in the comment section below.