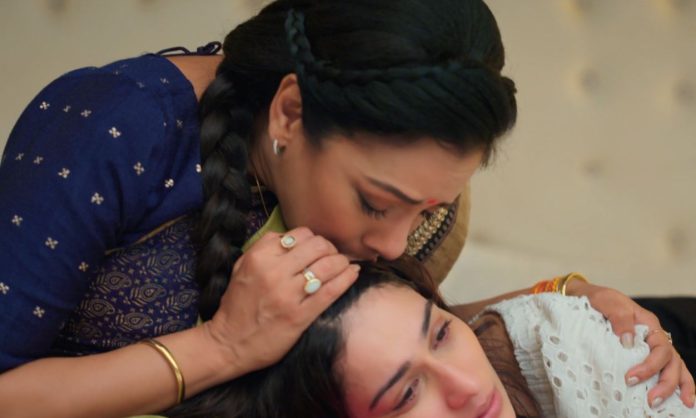 Anuj asks how to stop and calm down. He says Malvika suffered a lot because of him at such a young age. Anuj tells Anupama that Malvika didn’t say a word and just emptied her eyes by crying a lot after their parents died. He says Malvika seems the same as before. Anuj reveals that Malvika just said a sentence when Akshay left her. Anuj says, Malvika just told him that Akshay loved her too as well as her money. He then reveals the most horrifying night of him and Malvika, that was on 31st December. Anuj says Malvika didn’t say anything to him even then and instead just asked him to take her far away from there.

Anuj further reveals that Malvika neither had the courage to fight nor the courage to send that cruel man to prison. Anuj and Anupama together say that this happens when the person gets completely broken. Anuj says even a mountain breaks after getting wounded on the same place again and again and Malvika is/was still a human. Anuj says his Malvika broke. He says it takes courage and hope to fight but Malvika has nothing left. Anuj says Malvika is left with neither courage nor hope and just wants to run away. Anupama handles a scared Malvika. Anuj says Malvika has been running till today from herself, us and from everything.

Anuj says, “one who runs from pain never knows how to run”. He says pain occurs inside a person’s heart and walks with him/her every time. Anuj says pain stays with them and Malvika feels the same pain. He says Malvika doesn’t have marks on her hands or feet, but has pain in her heart. Anupama tightly hugs a scared Malvika. Shahs feel worried as they couldn’t get in touch with Malvika, Anuj and Anupama. Bapuji tells Vanraj that he feels something isn’t right. Vanraj replies that he feels the same. Samar says they should go and see. Back at Kapadia house, Anuj and Anupama caress scared Malvika. Anuj tells Anupama that she made a lot of efforts to convince Malvika and the latter would have explained herself hard.

He says Malvika tried to move on by forgetting the trauma after long. Anuj further says Malvika tried to move on, on New Year by forgetting her past. He cries saying that life has done the same with Malvika again. Vanraj witnesses Anupama handling sobbing Malvika and Anuj. Anupama cries seeing the broken brother-sister sobbing in her lap. Paritosh informs Shahs that Malvika won’t be able to come due to some issue but Vanraj will return in some time. Angry Kavya asks if Vanraj is a counselor that he stayed there to solve Malvika’s issues? Everyone gets worried and irritated with Kavya’s anger.

Kavya asks couldn’t Anupama and Anuj have informed them that they won’t be able to come due to Malvika’s issue. She blames Anuj, Anupama and Malvika for spoiling the New Year party. Kavya says Anuj and Malvika are doing the same drama as they did on Christmas. Samar asks Kavya to calm down and says no party is bigger than someone’s life problem. Kavya asks why Vanraj needs to stay at Kapadia house when Malvika’s brother and to-be sister in law (Anupama) is there with her. She says she knew that Malvika would create some drama as she didn’t wish to come to the party. Kinjal and Baa tell Kavya that some major reason would be there that Kapadia’s couldn’t arrive.

Kavya shows anger towards Kavya. Bapuji relaxes thinking that Anupama, Anuj and Malvika are fine. Pakhi says they meet Anupama on festival days only and their New Year got spoiled now. She cries missing Anupama. Paritosh and Kinjal console Pakhi. Kavya says the whole year will go like this. Vanraj taps Anupama’s shoulder. Anuj gets alerted. Vanraj apologizes and says he had to come as everyone went tensed for them. He asks Anupama to handle Malvika till he talks to Anuj outside. Anupama feels bad for Malvika’s condition thinking that the latter suffered a lot at such a young age. She thinks that anyone would cry hearing her pain and she (Malvika) still smiles.

Baa threatens to slap Kavya hard. Pakhi’s siblings try to console her. Kinjal tries to make Pakhi understand that maybe Anuj and Malvika need Anupama more than they do today. Kavya again tries to provoke Pakhi against Anupama and Malvika. Baa shuts Kavya. Shahs wish each other “Happy New Year”. Everyone writes their New Year wishes on the chits. Baa wishes for her family to always remain together. Bapuji wishes that this year, Anupama may get all the happiness she deserves. Mamaji forgets his wish. Kavya wishes that everything gets sorted between her and Vanraj. Kinjal wishes that her near and dear ones always be happy and healthy.

Paritosh wishes that his and Vanraj’s business go super successful. Mamji recalls his wish. Pakhi wishes that her parents remain with her on at least special occasions. Samar wishes for Anupama’s happiness. Everyone puts their New Year wish chits in Pakhi’s box. Kavya thinks she thought of convincing Vanraj on New Year but failed. She further thinks that Anuj, Anupama, Vanraj and Malvika have formed another team. She thinks of it as a mess of another level. On the other hand, Vanraj gives water to Anuj. Vanraj tries to give courage to Anuj saying that everything will get better. He tells Anuj that he can understand what he must be going through, being a brother himself.

Vanraj asks Anuj to remember that he is always there to help him. Anuj signs that he understood. Inside Malvika’s room, Anupama asks Malvika where did that evil/cruel person hit her? Malvika screams in pain a little, when Anupama touches her. She tells Anupama that it’s painful. Anupama caresses Malvika’s painful places. She asks Malvika to touch and tell if she is still feeling the pain? Anupama covers her mouth and cries recalling her own painful moments. She recalls how Devika helped her in her pain. Anupama asks Malvika to scream out her pain, anger and yearning.

She continuously asks Malvika to take out everything from herself and say whatever she wants to? Malvika starts screaming her pain, anger and yearning outside. Anupama praises Malvika’s efforts. Anuj and Vanraj run inside hearing Malvika’s screams. Anupama gives Malvika a pillow and asks her to take out her anger on it, thinking it as the evil or cruel man who beat her earlier. Anuja and Vanraj get shocked. Vanraj stops Anuj and tells him to not worry as Anupama is doing the right thing. He tells Anuj that this way Malvika would be able to get her anger out of herself.

In the next episode, Anupama will sing a lullaby to calm Malvika and make her asleep. She will angrily ask if women are punching bags for men? Anupama will further ask till when women will have to suffer. Vanraj will say that this will happen till men will not change themselves. Anupama will ask Malvika to come with her to Anuj.

Reviewed Rating for Anupama 10th January 2022 Written Update Laudable Anu: 5/5 This rating is solely based on the opinion of the writer. You may post your own take on the show in the comment section below.