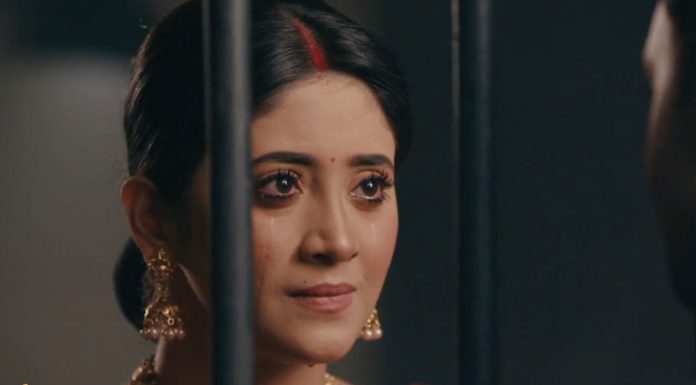 Balika Vadhu 10th January 2022 Written Update Anandi gets arrested Anandi walks sadly while returning to Anand’s home. Suddenly her mother’s letter falls near her. She reads it and thinks about who burned it. Anandi continues reading it. The letter read that Anandi’s parents realized their mistake of getting her married in childhood. They also told Anandi in the letter that it would be her legal right to end her child marriage after she gets 18 years old. Maadi Baa and Anand argue with each other about burnt letter. Anandi returns and shows the burnt letter Sejal burnt.

Sejal blurts that she burnt it. Anandi questions Maadi Baa and Sejal about hiding her mother’s letter. She asks them how they can hide the truth and her rights from her. Sejal tells Anandi that it’s nothing what she was thinking. Anandi continues questioning Sejal why they want to keep her married to Jigar when they know about Jigar’s ill behavior towards her. Anandi tells everyone that Jigar is not her responsibility, that she should make an effort to improve him. Premji arrives and tells Anandi that Jigar is guilty and wants to face the punishment of his crimes. He asks Anandi to make a decision now.

Emotional Anandi runs to her room. Anand runs behind Anandi. Diya’s evil fiance gives some money and jewelry to some goon to hide his evil works. Mehul fails to see him. Mehul talks to Jigar on call and says he is trying to convince Anandi. He goes and tries to manipulate Anandi emotionally. Mehul tells a crying Anandi that he will support her in her every decision. Maadi Baa fears going to prison and scolds Mehul for letting Anandi take her own decision. Mehul tells Maadi Baa that he thinks Jigar is guilty and will convince Anandi to forgive him.

Anandi comes decked up as newly wedded bride and says that she decided to return to Devgarh. Anad objects to Anandi’s decision unaware of real intentions. Maadi Baa gets happy thinking that Anandi is going to bail Jigar out. She taunts Anandi by saying that finally god gave her some brain to think. Anand asks Anandi why she is wandering like a newly wedded bride after whatever happened with her. Anandi tells Anand that she is wearing her mother’s saree and is going to fulfill her last wish. Anand tells Anandi that he will go to Devgarh with her. Anandi asks Anand to let her fight her life issues herself as she can’t depend on him for whole life. She also says that she is going to Devgarh for the last time.

Anandi feels more shocked by hearing Jigar’s words. Jigar asks the female inspector how can a husband see his wife involved with some other man. Anandi feels very angry. She asks Jigar to stop stopping so low. Anandi tells Jigar that he went too low. She further tells Jigar that even his parents are embarrassed with his actions. Jigar makes Anandi angry and violent by asking how his parents will react seeing her in Anand’s arms and attacking him (Jigar). Jigar pretends to be scared of violent Anandi. Female inspector gets Anandi locked up in the lock up.

Anandi says she will herself go inside the lock up as she did wrong by thinking of bailing out Jigar. Jigar smirks and goes to Anandi. He taunts her and says ill words to Anandi. Jigar tells Anandi that he could have proved her wrong with the footage in front of the whole family too. He tells Anandi that he wanted to see her suffer in the prison like she made him suffer. Anadi asks Jigar to pray that she doesn’t come out of prison, otherwise she won’t let him live with peace.

In the next episode, Anandi will be seen pouring whole water from a pitcher pot on herself. Anandi’s sindoor will get wiped off. Jigar will tell Anandi that wiping the sindoor from her hairline will not change her fate. He will confidently tell Anandi that she is his wife and will always remain his wife. Anandi will confidently tell Jigar that she is not his wife now and their marriage is over now. Jigar’s family will be shocked hearing Anandi’s decision. Anand will be seen injured and relaxed with Ananid’s decision. Jigar will be seen very angry.

Reviewed Rating for Balika Vadhu 10th January 2022 Written Update Anandi gets arrested: 3/5 This rating is solely based on the opinion of the writer. You may post your own take on the show in the comment section below.