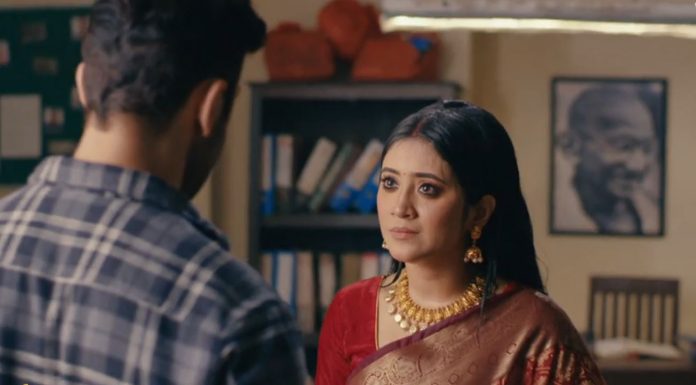 Balika Vadhu 11th January 2022 Written Update Anandi’s freedom Prisoners in the police station laugh at Anandi. Jigar collides with Anand’s car. Anand gets shocked to see Jigar free and asks him about Anandi. Jigar makes fun of Anandi and Anand’s situation. On the other side, prostitutes and male prisoners think laugh at Anandi. They trouble Anandi and treat as her some prostitute. Anand cries and sees Anand. She calls him and Anand gets shocked to see Anandi inside locked up. He asks Anandi how Jigar got free and she got arrested. A constable calls Anandi as Anandi’s darling.

Constable gets angry at Anand and beats him. Anandi asks the constables to not beat Anand. Constables keep beating Anand without any fault. Anandi grows worried for Anand. Jigar smirks. Constables stop thinking their plan will fail if anything happens to Anand. Anand provokes constables to make him locked up inside the prison, so he could be with Anandi and protect her. Maadi Baa and Sejal feel worried for Jigar. Jigar returns and Maadi Baa and Sejal worry for Jigar. Bhairavi and Sejal ask Jigar about Anand and Anandi’s whereabouts. Jigar shocks everyone by telling them Anand and Anandi won’t return.

On the hand in prison, Anandi worries for injured Anand. She apologizes to him. Both Anand and Anandi make each other laugh. Anand feels dizzy due to injuries. Anandi requests Anand to be awake and handle himself. Anand agrees with Anandi. They get lost in each other’s eyes. Anandi falls asleep and Anand stares at her lovingly. At home, Jigar tries to provoke his and Anand’s family through CCTV footage. He tries to make everyone believe that Anand and Anandi planned to trap him and tries to murder him. Maadi Baa believes Jigar. Bhairavi refuses to believe Jigar. Jigar says Anand always tries to trap him and provokes Anandi against him.

Bhairavi refuses to believe Jigar. Jigar says Anand has felt for Anandi since childhood. Maadi Baa says Anandi has always embarrassed them. Jigar says Anand has been brainwashing Anandi since childhood. Maadi baa speaks in support of Jigar. She asks Bhairavi if Anand’s feelings for Anandi aren’t wrong. Bhairavi recalls Anand’s sacrifices for Anandi. Mehul calls and tells Bhairavi that Anand and Anandi can’t get bailed till next morning. Maadi Baa also tries to provoke Bhairavi against Anand and Anandi. Bahiravi tells Maadi Baa that she has searched a property for her family and Anandi near Anandi’s college to keep their families away. She thinks now their families should go their own ways.

Mehul bails Anand out. Anand promises Anandi that he won’t leave her alone. Mehul tells Anand that Anandi’s bail is not their responsibility but Anjariya’s. Anand says he won’t leave Anandi suffering. Jigar reaches the police station with Premji and a lawyer and says Mehul is right. Jigar bails out Anandi. He gives a glare to Anand. Constable brings Anandi out of lock up. Jigar hugs Anandi pretending innocence. He apologizes to Anandi for letting her be lock-up the whole night. He tells Anandi that he forgave her. Jigar further tells Anandi that she will have to live as his wife. He warns her to live according to him otherwise he can go to any extent. Anandi makes Jigar leave her hand.

Anand asks Jigar to be in his limits. Mehul angrily asks Anand to let Jigar and Anandi solve their problems on their own. Anandi feels angry and Jigar feels happy. Mehul asks Jigar to return home with him. They hear a plate’s falling sound and look towards it. They get shocked to see Anandi picking up the pitcher pot. Anandi turns the pitcher pot on her head. The water falls on Anandi. Anandi’s vermilion gets wiped from her hairline. Everyone gets shocked seeing Anandi’s step. Anandi recalls her mother’s words that told her that she is free to cancel her marriage after getting 18 years old. She breaks the pitcher pot in anger.

Jigar tells Anandi that her fate won’t change by wiping vermilion from her hairline. Angry Anandi breaks all her relations with Jigar. She tells Jigar that she wasn’t his wife from heart too and is not even his legal wife now. Jigar gets angry hearing it. Anand feels proud of Anandi and her decision.

In the next episode, Anjariyas will blame Anandi for everything. They will taunt her at each step. Maadi Baa will break all relations with Anandi. Anandi will feel bad by Anjariyas behavior towards her after her big decision. NGO employee will help Anandi in getting her free from her child marriage with Jigar. She will give scared Anandi the strength to annul her child marriage. Anandi will recall Anjariyas ill words and tell the NGO employee/lawyer Sonia that she won’t get scared anymore as she wants freedom from fear. She will sign some papers given to her by an Sonia. Sonia will congratulate Anandi for finishing her first step towards Annulment of child marriage. Anandi will feel relaxed.

Reviewed Rating for Balika Vadhu 11th January 2022 Written Update Anandi’s freedom: 5/5 This rating is solely based on the opinion of the writer. You may post your own take on the show in the comment section below.