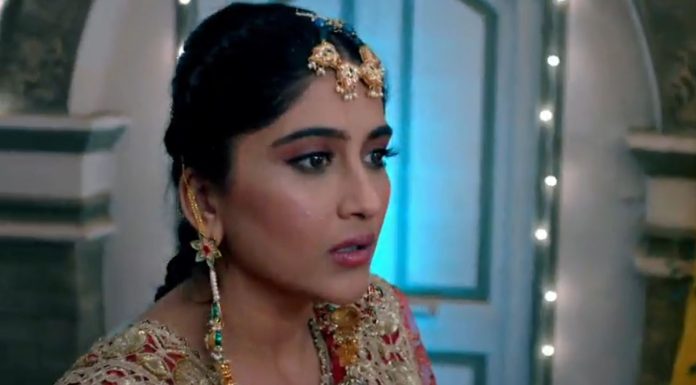 Choti Sarrdaarni 11th January 2022 Written Update Seher at task Everyone announces Raj and Seher as the best dancing jodi. Kulwant takes everyone for dinner. Harleen and Robbie hatch a plan to hurt Raj. Robbie takes Raj with himself to make him meet his guests. On Karan’s objection too, Param sends Raj with Robbie. Robbie makes an excuse and leaves Raj near the Lohri bonfire. Seher and Kulwant get worried seeing Raj moving towards Lohri Bonfire. Harleen and Robbie smirk. Seher asks Kulwant to let Raj give this test on his own.

Raj recalls Seher’s advice to feel things by touching them. Raj escapes the bonfire making Seher and Kulwant happy and proud. Harleen and Robbie get shocked. Seher thinks Raj made her proud. Next morning, Seher reaches Guruji’s ashram and requests him to help her with Raj. Guruji gets angry with her. He angrily tells Seher that Ayurved requires patience and service. Guruji asks Seher to try growing the plant as soon as possible. Seher tells Guruji that the first thing that parents taught is service (sewa). Guruji asks Seher would she be able to do anything for Raj?

Seher tells Guruji that she fears only God, not anyone else. She continues telling that she can do anything for Raj as she passionately loves him. She tells Guruji that she will reach early next morning for the task. Guruji says Seher is just like Meher. Seher reaches home and hears Mrs. Bhalla asking Karan and Param to ask questions from the girls coming to see them. She asks them to question the girls who will prioritize family or career? Seher explains that in a marriage both husband and wife are equal. She asks everyone why girls are always asked to compromise? She tells Robbie that his decision about keeping a beauty pageant to select wives for Param and Karan is wrong. She says they should instead keep a “Swayamvar” for Karan and Param. Seher convinces Param and Karan for it.

Harleen thinks how girls can be given the chance to choose between Param and Karan. Param chooses Seher’s decision over Harleen’s decision. Harleen asks Seher to see how much Param loves her and leaves. Karan asks Seher how will he face people if they will question his identity? Seher asks him to remember their parents’ advice to not give importance to people’s ill words. Param overhears Karan’s words and thinks that Karan is highlighted due to him always. He thinks he can’t compete with Karan. At night, Raj sees a nightmare about Seher and wakes up tense. He leaves to find Seher. Raj finds Seher praying to God.

Seher tells Raj about Meher’s Guruji. She tells him that Guruji can heal the biggest diseases too. Raj asks Seher how can she trust a Guruji. Seher asks Raj to trust her. She tells Raj that she needs to meet Guruji early in the morning. Seher and Raj both feel tensed thinking that something bad is going to happen. Raj decides to hide his nightmare and fear from Seher. He asks Seher why she needs to meet Guruji early in the morning? Seher recalls that Guruji gave her the task to bring him two-four leaves of the highest tree near him by climbing it. She sarcastically tells Raj that she is going to bring stars and moon for him the next day. Raj feels good. He asks Seher to sleep peacefully with him. Seher agrees but feels tensed about the task.

Seher and Raj return to their room and make each other feel each other’s care. They lie on their bed and discuss things with each other. Seher asks Raj how they will take care of their children. She wishes her and Raj to become parents soon. Raj tells Seher that she and their child would be their responsibility. Seher wishes that Raj gets fine and sees their children with his own eyes. In the next episode, Seher will reach the ashram for her task. Guruji will explain to her the task. Seher will almost fall while performing the task.

Reviewed Rating for Choti Sarrdaarni 11th January 2022 Written Update Seher at task: 3/5 This rating is solely based on the opinion of the writer. You may post your own take on the show in the comment section below.