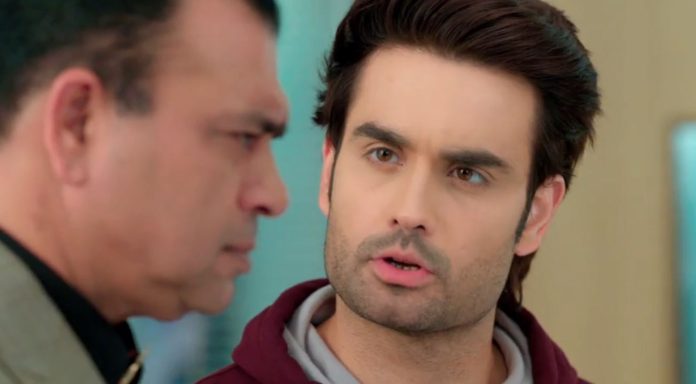 Cardiologist asks to not crowd the emergency room as it’s not allowed. Anita goes outside. Suhani too goes outside. Ansh follows Suhani outside. Suhani accepts a handkerchief from Ansh. Ansh asks Suhani to not worry as the senior cardiologist is looking after Rakesh. He tells Suhani that mostly heart attacks occur either due to unhealthy lifestyle or stress. Ansh tries to provoke Suhani against Ranveer by saying that maybe Ranveer and Rakesh’s conversation led to Rakesh’s heart attack. Suhani feels angry. At Oberoi mansion, Mamta asks her servant Shyam to make Ranveer’s favorite dishes in the evening and especially his favorite almond kheer.

Mamta picks up Ranveer’s call. Ranveer asks Mamta about Vikrant’s whereabouts. Mamta tells Ranveer that Vikrant is getting ready for his office meeting. Ranveer gives his swear to Mamta and asks her to not let Vikrant go anywhere till he reaches home. Worried Mamta asks Ranveer what happened? Ranveer disconnects the call telling Mamta that she will get to know as soon as he reaches home. Mamta gets lost into thinking. Suhani stops Ranveer in his way. He scolds Suhani and asks her if she would have gotten hurt. Suhani tells Ranveer that he has already hurt her by making Rakesh’s condition worse.

Suhani asks Ranveer if he doesn’t realize his medical duties. She asks him how he can run away by making her father’s condition worse due to his anger. Ranveer refuses to give any explanation to Suhani. He tells Suhani that it’s her habit to make decisions, without knowing understanding the reality. Ranveer also tells Suhani that she reacts by misunderstanding him and then comes apologizing. Suhani asks Ranveer if he has something important to do, leaving her father in the hospital emergency ward. Ranveer says yes and asks her to give him side to leave.

Angry and emotional Suhani gives Ranveer the space. Ranveer leaves from there. Suhani tells Anita that Ranveer talks deeply but his actions don’t match his words. She thinks how can Ranveer leave her alone in this critical situation. Anita reminds Suhani that Ranveer wandered with her in the ambulance because of her little injury and now left her alone in a critical situation. Suhani says Ranveer can’t meet her eyes because he is somewhere responsible for Rakesh’s present condition. She says Ranveer’s absence doesn’t affect her. Anita tells Suhani that she is getting affected and it can be seen in her eyes. She further tells Suhani that it is Ranveer at fault today.

On the other hand, Mamta feels anxious wondering why Ranveer wants to meet Vikrant today suddenly. She sees Vikrant coming downstairs and thinks how to stop him. Ranveer’s grandfather asks Mamta to not take stress. Ranveer comes and screams “Vikrant Oberoi” in anger. Vikrant and Ranveer come face to face. Vikrant asks Ranveer to lower his voice and learn to talk respectfully with his elders. Ranveer tells Vikrant that when elders forget their limits, then youngsters also forget their manners. He asks Vikrant what he said to Rakesh by calling him to Oberoi Mansion.

He doesn’t even let his grandfather talk in between. Roshini asks Ranveer why won’t anyone say anything to him, when he embarrasses and insults Vikrant again and again? Vikram asks Ranveer why he is insulting Vikrant for just being an employee. Ranveer tells Vikram that Rakesh is Vikrant’s employee not slave. He says Vikrant’l doesn’t have the right to call Rakesh and insult him. Vikrant tells Ranveer that he didn’t say anything when he broke his engagement due to Rakesh’s daughter Suhani. He tells Ranveer that he even did not utter a word when he insulted him in front of everyone. Ranveer tells his family that Suhani doesn’t even know that he has feelings for her. Mamta gets shocked.

Ranveer asks Vikrant why he involved Suhani and Rakesh in between, when he was the one who humiliated him every time, not them. He asks Vikrant who gave him the right to question Suhani and her upbringing? Ranveer tells Vikrant that he made a big mistake for which he will have to apologize to Rakesh. This shocks the whole Oberoi family, especially Vikrant. Vikrant tells Ranveer that he would never apologize to Rakesh. Ranveer Singh tells Vikrant that he would have to apologize to Rakesh as his humiliating words stressed Rakesh. He continues telling that due to Vikrant’s humiliating words, Rakesh suffered a heart attack.

On the other hand, Suhani asks Ansh why Rakesh is not getting conscious. She asks Ansh about Rakesh’s reports. Ansh asks Suhani to relax. He asks her, how will she handle her family reacting like this. Suhani tells unconscious Rakesh that she will listen to everything he says. She cries and asks him to wake up. Ansh gives water to Suhani. Kamini comes and snatches water from Suhani. Members of Sharma family too enter Rakesh’s ward. Kamini taunts Suhani for being shameless. She blames Suhani for Rakesh’s condition. Sudha asks Kamini how is Suhani at fault in all this.

Suhani’s grandmother scolds Kamini for speaking ill. Kamini tells Sudha and her mother that they have got blind in Suhani’s love. She asks them to realize that Ranveer and Suhani are the reason for Rakesh’s condition. Cardiologist asks the Sharma family to not crowd the ward. Ansh asks the Sharma family to calm down as Rakesh is fine. Sudha asks if everything is fine, then why Rakesh is not getting conscious? Ansh says best and senior Cardiologist, Dr. Karan checked everything and everything is normal. He asks Sharma family to not worry. Kamini thanks Ansh and says he is the one who thinks well about their family. She tells Ansh that first his mother Asha helped them years ago and now he is helping them.

Ansh says it’s his duty as he is to become a doctor. Ansh discusses Rakesh’s report with the cardiologist. Cardiologist wonders why Rakesh is not getting conscious if his reports are fine. Ranveer comes and says he can tell. Kamini asks Suhani to see that her lawyer arrived. Suhani angrily asks Ranveer if he completed his important work? She tells Ranveer that Rakesh’s health is worsening and she doesn’t know why Rakesh is not getting conscious? Ranveer tells Suhani that Rakesh’s treatment is incomplete. Everyone wonders what Ranveer means. Ranveer says medicines can’t treat heart and emotional wounds. Its treatment is different.

Ranveer says he brought the treatment with himself. He calls Vikrant inside Rakesh’s wards. Everyone gets confused, wondering what Ranveer is going to do. Ranveer asks Vikrant to apologize to Rakesh. Ranveer’s words shocks everyone present in the ward. He compels Vikrant to say sorry to Rakesh. Ranveer takes Vikrant to Rakesh. He asks Vikrant to say sorry to Rakesh to make him conscious. Vikrant apologizes to unconscious Rakesh by accepting his mistake without his willingness. Vikrant continuously seeks apology from unconscious Rakesh. He tells him that he forgot the difference between right and wrong. Sharma gets shocked. Vikrant says sorry and takes his ill words back.

Vikrant apologizes to Rakesh again for misunderstanding his intentions and humiliating him. Ranveer angers Vikrant by asking him to apologize to Rakesh by folding his hands as his mistake was very big. Everyone looks at the angry father-son duo with shock.

Reviewed Rating for Sirf Tum 11th January 2022 Written Update Ranveer’s big step: 4/5 This rating is solely based on the opinion of the writer. You may post your own take on the show in the comment section below.