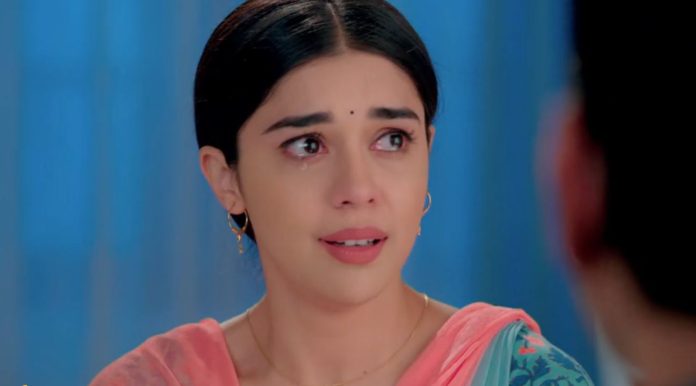 Sirf Tum 12th January 2022 Written Update Suhani surprised Ranveer tells Vikrant that he has not much time left as the media is waiting for him. Vikrant recalls Ranveer’s countdown. He also recalls a servant coming and telling him that some media persons came to meet Ranveer. In the flashback it is seen that Ranveer asks the servant to call media persons inside. Ranveer asks the media persons to prepare for the interview. Vikrant asks Ranveer why he called reporters home? Ranveer tells Vikrant that all his three favorite things are going to say goodbye to him.

Ranveer reminds the media persons are here to cover his fake public image, hollow ego and fake promise that he loves him (Ranveer) a lot. He asks Vikrant, if his life rests on these three things only, isn’t it? Vikrant feels angry and tells Ranveer that he is crossing his limits. Ranveer shuts Vikrant down. Father-son’s confrontation shocks the whole Oberoi family. Ranveer tells Vikrant that he lost his chance of speaking. He says now he will tell the whole India what he did with Rakesh and that the latter is in ICU because of him. Ranveer shows Rakesh’s resignation letter to Vikrant and tells him that this is the proof against his crime.

He hands over the letter in Vikrant’s hand. Ranveer further tells Vikrant that he will now publicly disown him. When Vikrant angrily asks Ranveer to not do it, the latter assures the former that he would surely do it. One of the media persons comes and tells Ranveer that they completed all arrangements for the interview. Ranveer asks the media to wait as he is coming. Vikrant again asks Ranveer to not do it. Ranveer reminds Vikrant that he didn’t choose his option. Ranveer moves towards the media persons. Media persons questions Ranveer, what announcement he wanted to make? Vikrant stops Ranveer from speaking further. He takes Ranveer to talk about something urgent. The flashback ends.

At the hospital in present time, Vikrant folds his hands in front of Rakesh. Rakesh opens his eyes, just when Vikrant apologizes to him with folded hands. This shocks and surprises people present in Rakesh’s ward. Rakesh signs Sudha to take out his mask. Sudha does the same. Rakesh asks Vikrant to not fold hands in front of him. He tells Vikrant that it is enough for him that he (Vikrant) realized his mistake. Ranveer sarcastically asks Vikrant if he just came to apologize? Vikrant angrily looks at Ranveer. Ranveer tells Vikrant that he is forgetting something. Looking at Ranveer, an angry Vikrant tells Rakesh that he doesn’t need to resign.

Ranveer tells Rakesh that their company needs talented, honest and dedicated employees like him. Without looking at Rakesh, an angry Vikrant tells him that he can resume office when he gets perfectly fine. Ranveer indirectly asks Vikrant to talk to Rakesh by looking towards him. Vikrant looks at Rakesh and asks him to resume office after getting perfectly fine. Suhani’s grandmother, Sudha and Suhani feel happy hearing it. Ansh and Vikrant feel angry. Ranveer receives his grandfather’s call and puts it on speaker. Reporters are still seen waiting in Oberoi mansion. Ranveer’s grandfather asks Ranveer what to say to media persons waiting for him?

Ranveer asks his grandfather to tell media persons that Vikrant wants to give some statement for the hospital he told he will be building/making. Ranveer looks at Vikrant with an attitude and says that a hospital will surely be made. He further says the poor will be treated for free in their hospital. Vikrant feels very angry but remains quiet. Ranveer’s grandfather disconnects the call saying okay to Ranveer. Suhani feels proud to have Ranveer as her friend. Ranveer asks Vikrant to return home as the media is waiting for him. Vikrant turns and leaves, giving an angry glare to Suhani. Suhani lowers her eyes in disgust.

Ansh too leaves the ward angrily. Suhani asks Rakesh if he is fine? Cardiologist parises Ranveer for bringing Rakesh back to consciousness by his good observation skills. He says that everyone was tense thinking why Rakesh wasn’t getting conscious even after Vitals seemed normal. Cardiologist tells Ranveer that he successfully caught Rakesh’s real illness. Ranveer thanks the cardiologist and says that we doctors generally diagnose a patient’s physical illness but some illnesses are treated by emotions. He says an honest person would never tolerate someone questioning his/her honesty and self respect and should never tolerate too.

Ranveer further says no medicine can fill the cracks of self respect. Suhani’s grandmother angrily asks Kamini to repeat her ill words in front of everyone. Kamini goes quiet. Sudha thanks the cardiologist. Cardiologist tells the Sharma family that Ranveer did Rakesh’s initial treatment too, thus they should thank Ranveer. He reveals that Ranveer got stubborn and called him here. Cardiologist says now Ranveer brought Rakesh back to consciousness too. He further says Ranveer will surely become a good doctor in future.

Cardiologist leaves telling Sharma family that they can take Rakesh home after he completes discharge formalities. Ranveer leaves from Rakesh’s ward too. Suhani’s grandmother angrily asks Kamini to use eyes with words too to differentiate between good and evil. She tells Kamini to see the Ranveer whom she was taunting, saved Rakesh’s life and made his father apologize too. Suhani’s grandmother asks Kamini who does so much for someone in this era? Suhani and Rakesh look for Ranveer. At night, Ranveer tells Mamta that Suhani and Rakesh weren’t at fault and didn’t know about his feelings for Suhani. Mamta hugs and tells Ranveer that she is proud of him. Ranveer thanks his mother.

Mamta tells Ranveer that she is proud of the fact that he stood for a girl’s respect and right. She tells Ranveer that she herself would have gone to apologize to Rakesh if she would have been aware of the truth. Mamta asks Ranveer if she can talk something about Suhani? At Sharma house, Sudha and Suhani help Rakesh settle in his bedroom. Rakesh recalls how he slapped Sudha for no reason and asks for an apology from her. He tells Sudha that he shouldn’t have raised hand on her. Rakesh again apologizes to Sudha by folding his hands. Sudha tells Rakesh that she forgot that slap already. Rakesh says he knows that a woman forgets her time, her age, her existence and everything for her family.

Rakesh says people like him think it as the duty of women. Sudha asks Rakesh to not think so much. Rakesh says he forgot his values himself by slapping Sudha, who is his house’s Lakshmi. He tells Sudha that husbands and wives have equal rights in marriage, which he forgot. Kamini feels irritated hearing it. Rakesh regrets his mistake of slapping Sudha. His health worsens a little and Sudha gives him water. Sudha tells Rakesh that she and Suhani went against his decision without knowing the reason behind it. Rakesh says he is the real one at fault and seeks an apology from Sudha. Nikki tells Kamini that she has no masala left to put in the above family drama.

Rakesh tells Suhani he couldn’t tolerate Vikrant questioning his upbringing and took a wrong decision. Suhani’s grandmother says truth can’t be hidden as it’s in truth’s nature to come out. She says it’s proved that Subani wasn’t at fault in whatever happened. Rakesh says this why Suhani will attend college without worry from the next day. Everyone except Kamini and Sudha feel happy. Roshini sees Mamta and asks her what happened? She asks her if she is thinking about Suhani. Roshini tells Mamta that Ranveer seems very serious for Suhani. She also tells Mamta that if Riya becomes their family’s daughter in law, she can improve Ranveer and Vikrant’s relationship.

Roshini further tells Mamta that if Suhani becomes their family’s daughter in law, maybe their families left relations could break too because of Suhani. Mamta feels angry with Roshni’s words. Rakesh requests Suhani to be careful that his family’s respect shouldn’t get hurt ever. Suhani agrees to Rakesh’s words. Rakesh says in this era where own family members don’t support each other, Ranveer showed affinity even being a stranger. Suhani’s grandmother blesses Ranveer for helping them. She asks Suhani to thank Ranveer the next day in college. Suhani recalls how Ranveer warned her to not react before knowing the whole truth.

Reviewed Rating for Sirf Tum 12th January 2022 Written Update Suhani surprised: 3/5 This rating is solely based on the opinion of the writer. You may post your own take on the show in the comment section below.