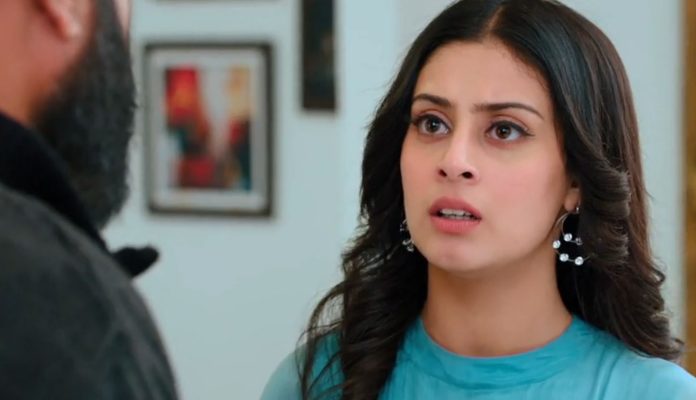 Udaariyaan 13th January 2022 Written Update Jasmin startled After Satti’s complain about Jasmin’s evil motives, Rupy goes more worried for Tejo. Tejo gets unreachable, which makes her parents panic. Rupy suspects that Jasmin has become threatening towards Tejo. He heads to the police station and files a complaint against Jasmin, stating that she wants to harm Tejo. He tracks Jasmin’s stay at the hotel and reaches there with the cops. Jasmin is shocked to see Rupy there.

She is more shocked to see the police following him, when he reveals that he has come to get her arrested. He asks her about Tejo, while she plays ignorant and innocent. What is Jasmin upto? Does she really want to harm Tejo or planned something more big? Did Fateh save Tejo from Jasmin’s evil plan? Keep reading.

Earlier in the show, Fateh tells that he will go and buy some food. Tejo attends the students in his absence, but gets worried when two of the students indulge in a fight. Tejo needs a first aid box for the wounded student. She goes on the highway road to find a medical store and buy the first aid kit. Fateh returns and doesn’t find Tejo. He learns that she has gone out an hour before. He rushes to find Tejo and grows too worried. Jasmin prepares to execute the accident plan, telling that Tejo and Fateh have no idea of the happenings. She boasts of herself that she is capable to ruin them alone. Satti grows worried because of Jasmin. She shares her concern with Rupy. They just wish Tejo’s safety.

Fateh madly searches for Tejo. Tejo is near the camp site, but Fateh fails to find her. With passing time, he gets more curious to find her and know her safety. Jasmin fools Angad as well about the accident plan. She doesn’t tell him that the accident is going to be real. He thinks its a fake accident she planned to trouble Fateh. He tells that he has done his plan and sent a police officer to play the role accordingly. Jasmin is double crossing Angad as well.

Satti and Rupy get afraid of Jasmin, who has turned mad and dangerous for everyone. They decide to find her and bring her home so that they can keep an eye on her moves. Jasmin wants Fateh and Tejo to face the biggest shock of their lives. Fateh finally finds Tejo and hugs her. He tells her that he was going mad when he couldn’t find her, he can never imagine his life without her. He confesses his feelings to Tejo. Tejo is taken aback.

Fateh breaks the hug and tells her that he was afraid thinking of Jasmin’s warning. She doesn’t get upset. He gets positive that she didn’t react in anger. He finds her hurt and cares for her. They return to the camp with the students, and enjoy the bonfire with music. Fateh and Tejo have a sweet moment. Fateh finds a guy misbehaving with his girlfriend. He lectures the guy on respecting women. The guy taunts him back that Fateh didn’t respect his own wife and had an affair with his wife’s sister.

Fateh answers back that he has realized his mistake and repented as well, his family never supported him in the wrong thing and made him realize what wrong he did with his wife. He tells that he is confident that he will never repeat such a mistake, he will always respect women and relations. He gives an impressive speech to the guy, while Tejo’s perception starts changing towards Fateh. After the trip ends, Fateh and Tejo leave for home. Fateh speaks to Buzo and Simran on the video call and gets the good news that Buzo has convinced his parents for the alliance. He promises to return home and speak to Khushbeer about it.

He tells Simran that he will convince Khushbeer for the alliance. Tejo overhears their conversation and feels happy for Simran. She tells Fateh that she heard everything and is really glad. She sits with Fateh and asks him to not talk to her. Fateh respects her word, and pleases her. Tejo and Fateh come closer on the return trip. He wishes to win Tejo’s heart soon.

Reviewed Rating for Udaariyaan 13th January 2022 Written Update Jasmin startled: 3/5 This rating is solely based on the opinion of the writer. You may post your own take on the show in the comment section below.