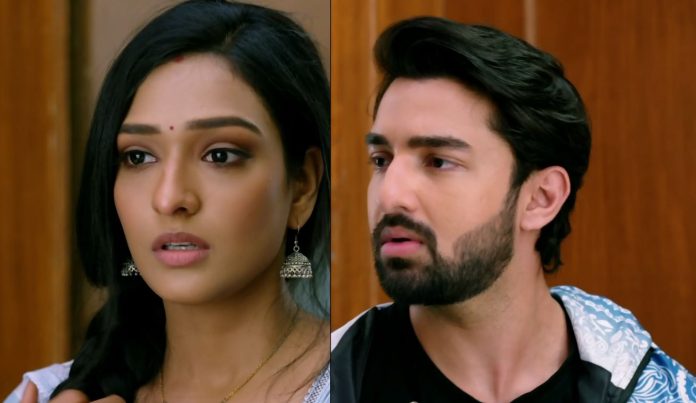 Bhagya Lakshmi 15th January 2022 Written Update Lakshmi meets Rishi Rano meets Neelam and Karishma. She tells that they did what they wanted to, but now Lakshmi will take charge of everything. She asks for a huge alimony, stating that this is Lakshmi’s decision to ask for compensation once she divorces Rishi. Neelam is left shocked. Rishi and Lakshmi are at the same time. Rishi prays to get one chance to meet Lakshmi. He wants to meet her and apologize to her. She prays to never cross paths with him. She doesn’t want to think of him or meet him ever. They both have a hit and miss. Rano tells that Lakshmi wants to divorce Rishi, she wants a compensation in return. Rishi and Lakshmi finally meet and get into an awkward moment.

Earlier in the show, Rano insults Lakshmi. She threatens to throw out Lakshmi and her sister. Lakshmi has faith on herself. She tells that she will pay the rent to Rano and protect her sisters. Rishi tells Neelam that he can’t tolerate anything about the Markesh dosh. He tells that he doesn’t believe in anything such. She knows that he is upset because of Lakshmi.

She calls Lakshmi wrong. He tells that its no Lakshmi’s mistake, its okay if she left the family, he respects her decision. He doesn’t want to force Lakshmi. Ayush thinks Rishi has fallen in love with Lakshmi, so he is defending her. Lakshmi tells Rano that she will find a job, she will fulfill her dreams and live with pride. Rano fakes her concern for Lakshmi. Shalu tells Lakshmi that she is proud of her sister.

Virender doesn’t talk to Rishi, but sympathizes a little after hearing him defend Lakshmi. Rano prepares to take the compensation from the Oberois. Lakshmi goes for job hunting again. She prays that she finds a job soon. The auto rickshaw breaks down near Rishi’s office. She sees the staff and hides. She doesn’t want anyone to see her. Rishi’s driver and guard see Lakshmi in the auto rickshaw and greet her. She asks the driver to take Rishi, she will go on her own. Rano comes to Oberois. Neelam asks where is Lakshmi. Rano tells that she has come alone, Lakshmi refused to come and told about Rishi’s secret affair.

Virender meets Rano and asks her about Lakshmi. Rano tells that Lakshmi will be okay now once she receives the alimony. She shocks him by the big demand of fifty percent of their property. Lakshmi and Rishi come to the temple, and recall their moments. Rishi tries to find some peace. He misses Lakshmi. He wishes to meet Lakshmi once. He wants to explain his side of story to Lakshmi. Lakshmi thinks she always falls weak when she sees Rishi, its better that they never meet. Rishi and Lakshmi get into a moment when her dupatta flies over his face. He gets reminded of her. He goes to find her.

He tells that it will happen only if Lakshmi demands the money. Rano tells that Lakshmi is her niece, they can’t get saved, they will not get spared this time. Rano leaves them with a warning. Neelam tells that Lakshmi has done too wrong with them. Virender defends Lakshmi. He tells that the situation was wrong, Lakshmi is at no fault. He doesn’t understand what to do, how to fix up things. Lakshmi reaches the same office for a job interview where Rishi comes for the meeting. Lakshmi sees Rishi coming towards her.

Reviewed Rating for Bhagya Lakshmi 15th January 2022 Written Update Lakshmi meets Rishi: 3/5 This rating is solely based on the opinion of the writer. You may post your own take on the show in the comment section below.