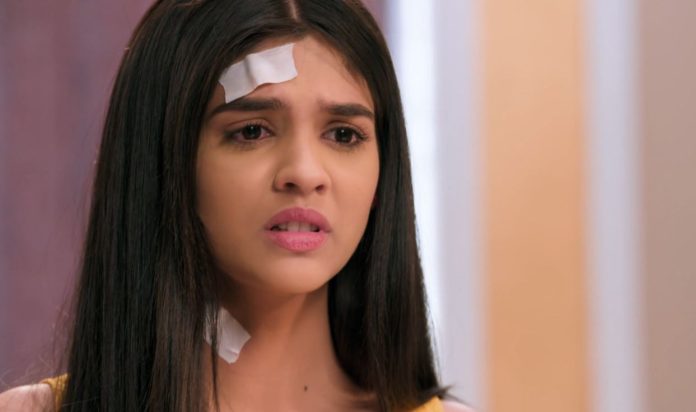 Yeh Rishta 14th January 2022 Written Update Wedding twist Akshara stops crying after hearing a tap on her ward door. Tense Manish, Kairav and Aarohi enter Akshara’s ward. They ask her what happened. Akshara tells Manish that she got scared. Anand comes and asks Akshara how she is doing. Harshvardhan says it’s good that everything got fine. Anand says Mahima went home and monitored Akshara’s condition the whole night. Manish says he is thankful towards Mahima for that. Aarohi tells Akshara that Abhimanyu met and told her that Junior doctor Rohan took good care of her.

Abhimanyu controls his anger and apologizes to Rohan. He signs Akshara’s discharge papers and handovers them to Rohan. Rohan asks Abhimanyu if he won’t meet Akshara. Abhimanyu sends Rohan saying he will not meet Akshara. He feels more frustrated with his and Akshara’s situation. On the other hand, Akshara is seen in her room at Goenka Mansion. Suhasini and Swarna feel good seeing Akshara at home with them. Manish thanks Anand for Akshara’s treatment and for saving her life. Anand tells Manish that they just did their duty and says that Akshara is just like his daughter.

He further credits Abhimanyu and Mahima for saving Akshara’s life in front of everyone. And tells Goenka that nurse and Arohi will take proper care of Akshara. He asks Aarohi to take care of Akshara properly. He calls Akshara a strong and brave girl. Aarohi takes Akshara’s health responsibility. Harshvardhan praises Aarohi’s attitude. He tells Goenkas that Aarohi is a great intern and a huge asset to Birla hospital. Harshvardhan assures Goenkas that Aarohi would soon in her young age only, will become a good doctor like Abhimanyu. Goenkas and Aarohi feel good and proud hearing Harshvardhan’s words. Harshvardhan asks Manish what they should do about marriage.

While Goenkas feels awkward, Akshara feels angry hearing Harshvardhan’s question. Manish asks Harshvardhan to tell his opinion. Harshvardhan says Akshara will soon get alright but in his opinion marriage is also important. Akshara in anger again and again clutches the bedsheet with her hand in which IV drip is attached. Anand says Harshvardhan is right. He says they would have to decide everything about marriage as Mahima and Manjiri’s absence. Harshvardhan asks Goenkas if they too noticed that many difficulties are coming in Aarohi and Abhimanyu’s marriage. He says that in his opinion they should get marriage done soon.

Kairav notices Akshara’s sadness. Harshavardhan says they should do haldi the next day and keep marriage in the evening. Manish asks Birlas how they can organize Aarohi’s marriage seeing Akshara’s present condition and within such short notice. Harshvardhan asks Manish to not worry as Akshara would get well soon. He asks Goenkas to not delay Aarohi and Abhimanyu’s marriage. Suhasini agrees with Harshvardhan’s decision. She says Akshara will take painkillers and rest today and will get fine to witness marriage the next day. Akshara feels angry with Suhasini’s decision while Aarohi feels happy. Aarohi sees Akshara’s drip filled with blood. Everyone gets worried. Anand asks Akshara to open her wrist.

He and Aarohi checks Akshara. Anand asks Akshara to relax, rest and sleep to recover soon. Aarohi recalls how she pushed and ignored Akshara before the accident. She thinks to talk to Akshara the next morning and apologize to her. Abhimanyu reaches home and gets angry seeing Neil dancing. Neil asks Abhimanyu if he isn’t happy that he is going to get married. He indirectly tells Abhimanyu that his marriage is happening on time even after Akshara met with an accident. Neil tells Abhimanyu that he is practicing to dance as his Baaraat will leave the next day. Abhimanyu gets shocked knowing it.

Neil congratulates Abhimanyu for making the gravest mistake of life. On Mahima’s questioning, Anand tells Akshara is fine and will recover soon. Anand gets busy on call. Harshvardhan says everyone will arrange for marriage functions from tomorrow and Akshara will rest and recover soon. Abhimanyu recalls Akshara’s condition during the operation. Harshvardhan says they sent Akshara home as she wanted to. He says seeing everything normal, they decided to organize the Haldi function, the next morning and the wedding in the evening. Abhimanyu feels angry hearing all this. Mahima and Neil notice this. Anand comes back.

At Goenka Mansion, Kairav caresses a sleeping Akshara. Aarohi is seen studying for her MD exam. Kairav gets shocked and tense seeing Abhimanyu’s face stamp mehndi on Akshara’s hand. Tense, Kairav thinks about what game is fate playing with his sisters. Abhimanyu is seen bust in calming himself through some pooja. He prays to God to take care of sisters’ lives. Kairav further asks God to do what is right for both Akshara and Aarohi. Next morning, Akshara wakes up and recalls both families’ decisions about Aarohi and Abhimanyu’s marriage. She thinks about how to forget Abhimanyu and says that she can’t control her emotions anymore.

Aarohi comes and asks Akshara to drink the Kadha made by Suhasini. She apologizes to Akshara and blames herself for Akshara’s accident. Angry Akshara asks Aarohi to answer her question that she asked her before the accident. She asks Aarohi whom she gave the money to and if she is doing something wrong. Aarohi gets angry with Akshara’s questions. Aarohi tells Akshara that she took a management quota seat in Manipur University as she got late to apply for MD course there. She tells Akshara that she had to lie to family and give 30 lakhs rupees for getting the management quota seat.

Irritated Aarohi indirectly insults Akshara by telling her that she has no big ambitions but she (Aarohi) wants to win the world. She asks Akshara to understand that they are different people. Akshara gets angry when Aarohi says that for her everything is fair in love, war and her dreams. Akshara asks Aarohi to at least think about Abhimanyu. Aarohi tells Akshara that she is thinking about Abhimanyu only as they will soon leave Anand and Mahima behind by becoming the power couple of the medical fraternity. Akshara stops Aarohi and tries to make her realize her mistake. Aarohi ignores Akshara and reads the message from University. She loudly thinks about how she will manage; exam, Haldi and marriage in just one day.

Aarohi calls the university and asks if exam dates can be rescheduled. On getting “no” as reply, she tells University staff that she will not miss her exam at any cost. This shocks Akshara. Aarohi thinks she will give the exam and get married too as she has already prepared for the exam. Akshara thinks Aarohi has forgotten the difference between right and wrong. She realizes that Aarohi’s intentions are even more bad than her fate. Akshara thinks Aarohi is not the right girl for Abhimanyu.

In the next episode, Akshara will think if she should let Abhimanyu get married to Aarohi as she and Abhimanyu love each other very much. She will further think that one wrong decision can ruin three lives. Anand will convince Abhimanyu to smear some haldi for Manjiri’s happiness and marriage ritual. Neil will fall and Haldi will fall on Akshara’s hand. Suhasini will tell Akshara that everyone misunderstood Naira as ignoble but she did what was right. She will further tell Akshara that truth is a bitter pill, but saves the day. Akshara will get lost into thinking.

Reviewed Rating for Yeh Rishta 14th January 2022 Written Update Wedding twist: 4/5 This rating is solely based on the opinion of the writer. You may post your own take on the show in the comment section below.