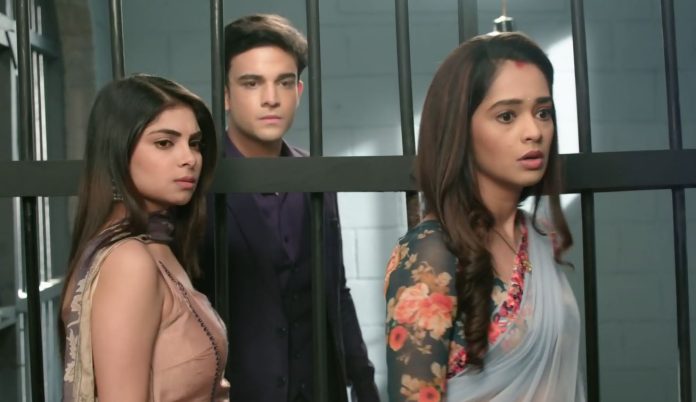 Kumkum Bhagya 18th January 2022 Written Update Ranbir returns Ranbir calls the police station and speaks to the Inspector about Prachi. Prachi senses Ranbir coming for help. Ranbir asks Inspector to make him talk to Prachi for a minute. Inspector yells at his kiddish request. Shahana asks Inspector if he was Ranbir’s call. She tells Prachi that she got the same thought. Inspector doesn’t tell them about Ranbir’s call. This breaks Prachi’s hopes. Prachi tells that she doesn’t know anything if Ranbir will come to help this time or not. She tells that she will help herself and leave from the lockup in a day.

Ranbir lands back in the city and takes the cab for the police station. Ranbir meets Prachi and Shahana, and tries to help them. He also gets arrested in order to talk to Prachi, just like Shahana did. Prachi gets troubled to see Ranbir in the other cell. Prachi asks constable to take Ranbir and lock him somewhere, because he has a habit of fleeing when he can’t solve the problems. He accepts that he was going away from the problems for his peace. He asks her why doesn’t she handle the problems when the other person in the relationship is foolish.

She answers him that its better to be foolish than smart when a person’s own smartness becomes his enemy. Shahana asks Ranbir and Prachi to stop arguing. The lady in the cell asks Shahana not to scold Prachi, who is pregnant. Ranbir gets Prachi’s pregnancy news and is hugely surprised. Prachi denies the news, but he gets doubtful. She doesn’t want the news to get known to Ranbir. Keep reading.

Pallavi asks Rhea why does she want Prachi to come back and disturb them. Rhea tells that she can’t get disturbed herself by seeing Prachi’s stuff. Pallavi tells that Prachi left the house, she didn’t leave from their lives. She asks Rhea to let Ranbir come back and throw the stuff outside, it will be a blessing for them, Prachi will be shocked knowing Ranbir has thrown her stuff wrong. She asks Rhea to focus on Ranbir, not the stuff. Pallavi calls Ranbir to know where is he right now. Aaliya tells that he might have gone for helping Prachi. Ranbir answers Pallavi’s call.

He tells that he had come out of Delhi for a meeting, he is waiting for a flight to return home in the morning. She asks him to come soon and celebrate Lohri with them. She tells Rhea that its good that Ranbir isn’t here. Rhea tells that she will make Ranbir throw Prachi’s stuff, she can’t let him help Prachi. She agrees to leave the stuff. Pallavi asks her to be happy and celebrate Lohri. Aaliya tells Pallavi that Ranbir can help Prachi knowing about her arrest, then it will be difficult for them to handle Rhea. Pallavi tells that she will not let anything wrong happen with Rhea, who is like a daughter for her. Ranbir wants to return home soon and then help Prachi. He tells that Prachi wanted to fight all the battles alone. He thinks Prachi has invited the problem herself.

He doesn’t want to tell her anything. He wanted to go away on Lohri so that the memories don’t disturb her. He misses those days when Prachi and he lived nuclear and enjoyed their times. He recalls the last Lohri they celebrated together, where he expressed his wish to get remarried to her around the Lohri fire. He thinks Prachi forgot all their promises and dreams, but he remembers everything. He wants to fulfill his dream on this Lohri.

Jai comes home to meet Vikram and Pallavi. Vikram asks him to have tea. He jokes that even he will get a cup of tea along with him. Jai asks for the files. Vikram goes to get files. Ranbir calls up Jai and informs that he reached the police station, he has called the lawyer as well. He thanks Jai for always supporting him. Pallavi overhears Jai and Ranbir’s conversation. Jai tells that he knows Prachi is important for Ranbir. He tells that Ranbir has come back just for Prachi by leaving his meeting. Pallavi is shocked to know this. Ranbir meets the Inspector. He asks him to let Prachi free, the lawyer is coming to bail her out. He apologizes to the Inspector for calling up to talk to his wife.

Inspector asks him to wait till the lawyer comes. He tells Ranbir about Prachi’s fraud. He asks Ranbir to sit and wait. Ranbir gets to see Prachi in the lockup. He pities her. Inspector asks Ranbir not to anger him. He tells that he will go out and have tea. Ranbir argues with him for Prachi’s sake. He asks Inspector to bring his wife out of the lockup. Prachi and Shahana wake up on hearing Ranbir yelling at the Inspector. Prachi cries seeing his concern. She tells Shahana that she has mood swings in pregnancy. Ranbir gets into a big argument with the Inspector. Inspector angrily puts Ranbir in the lockup. He asks Ranbir to sit talking to his wife now.

Pallavi informs Vikram that Ranbir has come back to Delhi, but didn’t come home because of Prachi. She tells that Jai informed Ranbir about Prachi’s arrest, Ranbir left his meeting and came back to rescue Prachi. Vikram tell that he can’t say anything to Ranbir, who didn’t inform them about his return. She tells that Rhea has done a lot to make Prachi out of Ranbir’s life, she tolerated a lot, if she learns that Ranbir cares for Prachi, then she can take any wrong move. Vikram tells that Prachi is in Ranbir’s mind, they can’t stop Ranbir from thinking about her. He finds Aaliya at the door.

Prachi asks Ranbir why did he threaten the Inspector. Ranbir tells that he just spoke in loud tone, he got angry. Prachi asks him to applaud himself. He tells that he has come to help her, but she is showing attitude. He asks her if she has a genuine reason to get angry. She tells that she can’t talk to him well because he isn’t a nice person. He thanks her for realizing his efforts and appreciating it. She asks him to not help her, because it will increase her problems. She argues with him. They go nonstop with their arguments.

Reviewed Rating for Kumkum Bhagya 18th January 2022 Written Update Ranbir returns: 4/5 This rating is solely based on the opinion of the writer. You may post your own take on the show in the comment section below.