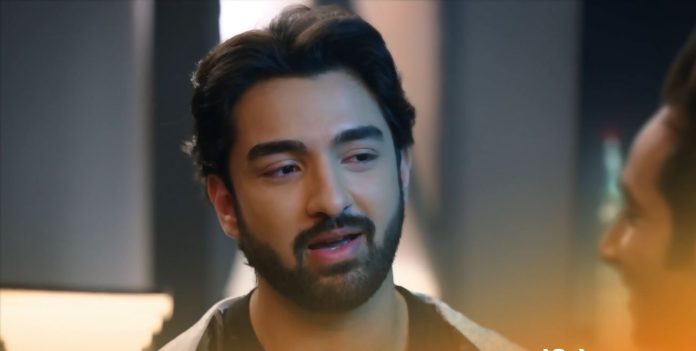 Bhagya Lakshmi 19th January 2022 Written Update Love begins Lakshmi comes home and overhears Bani and Shalu’s conversation. Bani tells that Rano is really nice to make Lakshmi’s favorite food, while Oberois are bad people who acted good in front of them. She tells that even Virender is a wrong person. Lakshmi asks Bani not to call him wrong, he had hid a big thing, but he always supported her. She tells that Neelam asked her to stay back but she didn’t feel Neelam’s love. She felt Virender’s love, sorrow and regret over the matter. She feels wrong has happened with her. Bani asks her if she will go back to Rishi if he apologizes to her. She refuses. Rano tells her husband about her move. She asks him to think of Neha’s marriage. She tells that she is doing everything for Neha.

He is shocked to check the divorce papers. Shalu and Bani don’t want Lakshmi to sink in sorrow. Lakshmi tells that she got cheated by entire family, her world changed in a day. She adds that Rishi cheated her, he couldn’t keep the marriage, he snatched the family from her. She tells that she feels she has come home by leaving her family. She misses Oberois. Shalu asks her to take care of herself. Chacha ji asks Rano about the divorce. He tells that Lakshmi’s life will be ruined.

Lakshmi gets to see the food prepared by Rano. She gets reminded of Rishi and Virender. Rano asks her for divorcing Rishi, and shocks her. Lakshmi refuses for the divorce. She slips in Rishi’s memories and cries. Rano tells that she will get Lakshmi divorced any how, because she just wants the money incoming for her. She tricks Lakshmi and takes her thumb impression while the latter is in sound sleep. Lakshmi cries at the thought of separation from Rishi, but doesn’t think there is anything left in the relation. Lakshmi loved Rishi before, and now love begins to bloom in Rishi’s heart.

Rano pretends to be a well wisher for Lakshmi. She serves the food to Lakshmi. She shows her loving and caring side. Lakshmi doesn’t understand why Rano is behaving so sweetly with her. Pritam looks at Rano. Rishi asks Dadi is she okay. Dadi tells that she is okay. She asks him to come and have tea. Karishma and Sonia tell that Rishi should know the truth, Rano had come home to talk to them. He tells that they shall give a chance to Lakshmi again, Rano is right to send Lakshmi home. He also wants Lakshmi to come home. Karishma asks if he is thinking that Lakshmi wants to come back. He tells that Lakshmi may not want to come back, but Rano would want Lakshmi to stay in her Sasural.

He adds that he is ready to fulfill Lakshmi’s necessities. Karishma tells that Lakshmi wants alimony after the divorce. Sonia insults Lakshmi. He is shocked to know that. He asks Sonia not to say anything wrong about Lakshmi. He doesn’t want to hear a word against her. Ayush smiles watching him. He tells Sonia that she needs to respect Lakshmi. Sonia asks him why didn’t he respect Lakshmi and his marriage then. Rishi tells that he respects Lakshmi.

Rishi tells Sonia that Lakshmi isn’t interested in alimony. He tells them that he tried to talk to Lakshmi, but she didn’t listen to him. She asks him why is he becoming a door mat for Lakshmi, why is he getting himself insulted. He asks her to stop it. He tells that Lakshmi isn’t at fault, it was his mistake, he is worried for her. He tells that he has to apologize to her. Sonia asks Karishma did she see what Rishi said. Dadi tells that its Rishi’s repentance, he loves Lakshmi and wants her back. Sonia gets angered on Rishi’s behavior. She tells that he would have not thought of Lakshmi if Malishka was with him now, but sadly Malishka is ill and away. Karishma asks why is Rishi behaving odd.

Dadi tells that Rishi has a heart which is aching now. Ayush asks Rishi why is he hurt because of Sonia. Rishi tells that he is hurt by his own deeds, he feels helpless, he wants to talk to Lakshmi who used to hear his nonsense. He tells Ayush about Lakshmi. He tells that Lakshmi used to say silly things, but it looked sweet to hear it from her. He misses her a lot. Ayush knows that Rishi loves her.

Rishi tells that he doesn’t know when Lakshmi became his best friend, when she became so selfish. He knows that she means a lot to him. He tells that she was much angry on him when they met today, he wanted to hug her tightly, but he had no right on her. Ayush tells that he has a right of a husband on Lakshmi. Rishi knows that Lakshmi can never ask for alimony that lowers her self respect. Rano asks Lakshmi to forgive her for her anger. She tells that elders always taught them to just tolerate the wrong in the Sasural, so she asked Lakshmi to return to her Sasural. Lakshmi asks Rano not to apologize. Rano thanks her. She asks Lakshmi to divorce Rishi, when she doesn’t want to stay with Rishi in that house.

Lakshmi and her sisters are shocked. Pritam takes care of Lakshmi. Rishi tells Ayush that Lakshmi has no interest in his money, he will always support her even if they have no relationship. He tells that she is special, he is ready to do anything for her, he can give her anything she wants. He knows that Rano is planning all that. Ayush loves his brother. Rishi tells that everyone hates him now. He tells Ayush that Lakshmi did a magic once when he wasn’t getting sleep, she massaged his hair, but he didn’t get angry on her, he really liked her relieving touch, he fell asleep, she sat down on the floor holding his hand and didn’t disturb his sleep. Ayush gets emotional hearing his love story.

Rishi starts valuing Lakshmi. He tells that Lakshmi used to feel safe with him, she is a great girl, anyone would love her. Rishi asks him if he loves Lakshmi. Rishi doesn’t know. Pritam apologizes to Lakshmi. He feels he isn’t doing his duty well. She tells that she is glad that he is with her, he is her only family now. She promises to be strong. He goes to reprimand Rano for her actions. He asks her not to talk to Lakshmi about the divorce. Rano tells that they are responsible for Lakshmi’s future now. He asks her to not hurt Lakshmi further. He tells that he will not tolerate any compulsion on Lakshmi. He warns Rano. He threatens of throwing her out if she dares do anything. Rano loses her temper. She wants the alimony from Rishi somehow, with or without Lakshmi’s consent. Stay tuned.

Reviewed Rating for Bhagya Lakshmi 19th January 2022 Written Update Love begins: 3/5 This rating is solely based on the opinion of the writer. You may post your own take on the show in the comment section below.