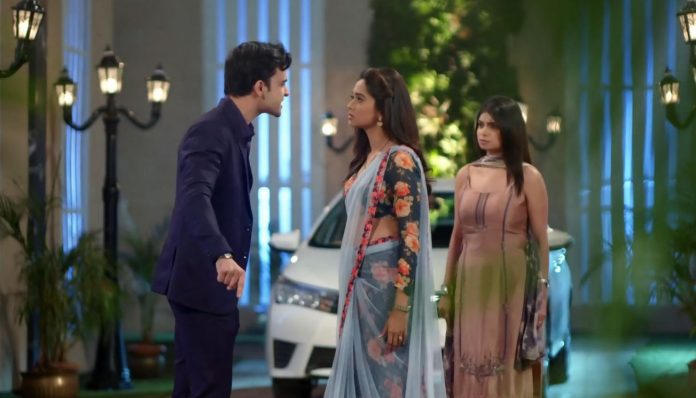 Kumkum Bhagya 19th January 2022 Written Update Prachi fights Ranbir Ranbir asks Prachi not to drag Shahana in between. Prachi tells that she will fight with Shahana. He tells that she only fights with loves ones. She agrees that she has anger on her loved ones. He asks her not to bring Rhea and Pallavi in between. He feels they can talk and sort their differences. Prachi tells him that there is nothing left between them to talk. Ranbir asks constable to put him into the other cell. Prachi also asks constable to shift Ranbir, who always runs away from problems. He asks her to solve the problems by becoming sensible. Shahana asks Prachi to stop it.

Rhea questions Pallavi about Ranbir, who didn’t come till now. Dida asks Pallavi didn’t she tell the truth to Rhea. Pallavi and Aaliya try to conceal the matter. Ranbir gets Prachi bailed out. They both get into an argument. Prachi tells him that she isn’t the same Prachi who he loved. Ranbir also feels the same thing. He tells that she isn’t the Prachi he loved, she has become such worse that nobody can fall in love with her.

Ranbir asks about the pregnancy news. The lady tells that she just heard Prachi and Shahana talking. He congratulates Shahana. He tells that its a great news. He hugs Shahana and Prachi happily. Prachi gets emotional. Ranbir gets foolish to misunderstand the news. He tells that he is really excited. He asks why did they get emotional. He tells that they shall celebrate the good news, he will throw a party for them. The lady tells that Shahana is worried that she is not married, and got pregnant. Ranbir asks Shahana about her pregnancy. Prachi cries understanding his foolishness. Prachi gets bailed out by Ranbir’s lawyer Mr. Gupta.

Ranbir thanks Gupta for coming. Gupta tells that he got to know about Shahana’s arrest also, so he got her bail papers also. Ranbir sees Prachi. He borrows Gupta’s car to take Prachi and Shahana home. Aaliya and Pallavi come home from shopping. Rhea tells that Pallavi is planning a surprise for her. Pallavi thanks Aaliya for helping her finish shopping so soon. Vikram tells that he thought Pallavi has left the house and will never come back. Pallavi asks him not to wish so. He laughs. Dida waits for Ranbir and Prachi to come home. Ranbir asks Shahana to sit in the back seat for the baby’s safety. Shahana stays silent.

Ranbir tells that its better for the baby if the mum is safe. Prachi also sits in the back seat by remembering his words. Ranbir thinks she is sitting with Shahana to take care of her. He asks Prachi what’s the matter. He tells that Prachi is glowing more than Shahana. He taunts Prachi for changing like weather. Shahana asks him to talk something normal. He tells her that he is taking her home to look after her until Sarita comes home. He tells that Prachi will leave the fights and get busy in Shahana’s care. He invites her home for Lohri. He tells that he isn’t mad to fight with Prachi now.

Shahana wishes Prachi tells the truth to Ranbir. Pallavi asks Vikram not to check the surprise for Rhea. She gifts him and Dida. Rhea tells that she is excited for the Lohri. The Kohlis are happy to get a chance to celebrate. Pallavi tells that its Rhea’s first Lohri after marriage, it has to be special. Rhea is happy. Pallavi tells Aaliya about the Lohri celebrations. She tells that she is happy to remarry Vikram on Lohri. Vikram is also happy with Pallavi. He tells that their bond is unbreakable. Rhea waits for Ranbir. Dida asks them if they didn’t tell Rhea about Ranbir’s return. Rhea asks the matter. Aaliya hides the truth from Rhea.

Ranbir brings Prachi and Shahana home. He tells that he loves kids a lot. He tells about his life’s dreams. He adds that having a baby was his dream with Prachi. He tries to recall his conversation with Prachi on the night they got intoxicated and married. He gets dizzy recalling Prachi’s letter. Prachi asks him what is happening to him. She asks is he okay. He tells that he is okay. He tells Prachi that he felt that he told these words to her before, about his three dreams. She remembers about the letter.

She tells that she had a heart which he broke. He replies that even he can complain a lot about the past. She reminds him that he was wrong, it was his mistake. He asks her to forget the past and move on. He tells that she can stay in the past if she wants. He angrily tells that he will not care for her from now. She doesn’t long to get his care and love. He tells that she isn’t his Prachi, she has become such that nobody can fall in love with. They both hurt each other by their taunts.

Reviewed Rating for Sirf Tum 18th January 2022 Written Update Suhani’s denial: 3/5 This rating is solely based on the opinion of the writer. You may post your own take on the show in the comment section below.