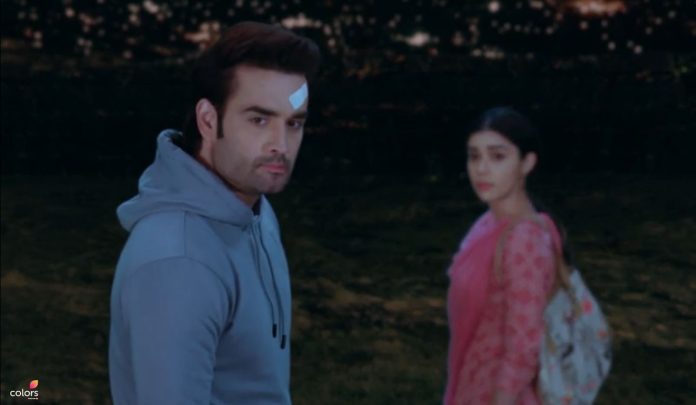 Sirf Tum 18th January 2022 Written Update Suhani’s denial Suhani asks Ranveer where he was. She tells him that everyone was searching for him and got worried. Suhani asks Ranveer who misses their own felicitation. Ranveer says he had to miss his felicitation for her. He turns Suhani towards the sky. “Sirf Tum” title song plays in the background. Ranveer lights a fire. Suddenly beautiful crackers burn in the sky. “Sirf Tum” in Hindi appears written between the crackers. Suhani initially gets scared but goes awestruck later on. “Sirf Tum” title song again plays in the background. Ranveer smiles seeing Suhani surprised.

Both Suhani and Ranveer turn to each other. Ranveer tells Suhani that his grandfather always says that it isn’t important that whatever they speak is right, but being scared of it, if we don’t say anything, that’s wrong. He says because of this he wants to tell her whatever is in his heart. Ranveer says his present words are not for his “Miss Zimmedari” but for the girl who initially became his responsibility, then obstinacy and now became his life. He tells Suhani that she is the girl he is talking about. This shocks and surprises Suhani. She turns and looks at Ranveer with mixed expressions. Ranveer tells Suhani that a human takes 9 months to come into life but takes whole life to find the reason for their life.

She tells Ranveer this a big thing for her that he found her worthy of his love. Suhani breaks Ranveer’s heart by telling him that she won’t be able to give respect to his love which it deserves. She tells Ranveer that being a doctor is her life’s only goal. She says it’s her mother’s dream too for which she has struggled a lot. Suhani tells Ranveer that if she accepts his love then she would neither be able to be together with him or keep respect for her mother’s efforts. She apologizes to Ranveer and tells him that she has no space for love in her life at present.

He tells Suhani that he will call her at exactly 9 PM to discuss next semester’s syllabus. Ranveer tells Suhani that she will be able to complete her syllabus if she starts preparing on time. Suhani tells Ranveer that she will manage and he doesn’t need to worry about her studies. Ranveer asks Suhani why he will be troubled to help a friend. He reminds her that they decided to “never leave your friend alone”. Suhani tells Ranveer that it’s different to understand him. She thanks him for understanding her. Ranveer reminds Suhani that her father would be waiting for her. Suhani wipes her tears and leaves with Ranveer.

All love confession crackers go off and clear sky can be seen. It hurts both Ranveer and Suhani. “Tere Ishq Mein-Sirf Tum” plays in the background. At Sharma house, Rakesh is seen tense recalling Vikrant’s demand for a list of people who are near their retirement. He continues recalling that Vikrant has decided to downsize his company by hiring young talent. Sudha and Suhani’s grandmother can be seen setting the dinner table. Rakesh drinks water and recalls that Vikrant allowed him to take a job in another company. His tension increases and glass falls from his hand. Sudha and Suhani’s grandmother runs to Rakesh, who faints on the floor. Kamini too comes there. She calls a doctor for Rakesh. On the other hand, Ranveer makes Suhani sit inside a taxi. From the taxi window, Suhani sees Ranveer sitting on his bike.

Reviewed Rating for Sirf Tum 18th January 2022 Written Update Suhani’s denial: 3/5 This rating is solely based on the opinion of the writer. You may post your own take on the show in the comment section below.