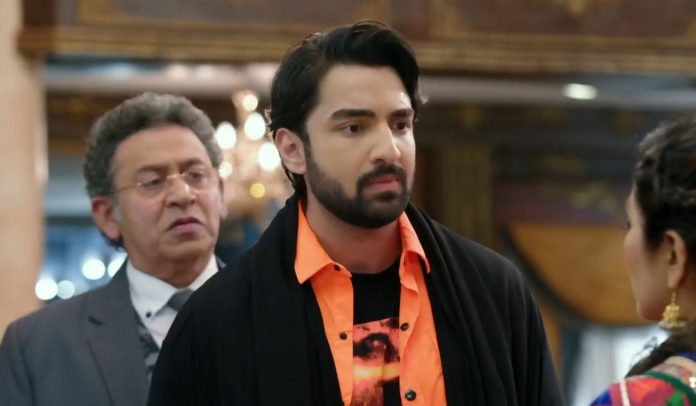 Bhagya Lakshmi 20th January 2022 Written Update News for Rishi Lakshmi refuses for the divorce, but Rano doesn’t deter from her evil plans. Rano goes to Lakshmi and finds her in sound sleep. She gets Lakshmi’s thumb impressions on the divorce papers. She tells that she will get Lakshmi divorced from Rishi, nobody can stop her, not even Lakshmi herself. She goes out and checks the papers. She smiles thinking her work is done perfectly. Rano heads to meet the Oberois. Virender doesn’t listen to Rano’s nonsense. He tells that Lakshmi should come to him and ask for alimony and divorce herself, only then he will believe it.

Rano replies that he wanted Lakshmi to come and testify in front of him, but now Lakshmi has chosen to send the signed divorce papers for Rishi. She tells that Lakshmi wants to divorce Rishi, so she has sent the papers. The family is shocked seeing the divorce papers. Rishi happens to overhear their argument. He meets Rano, who shows him the signed documents. He is deeply hurt that Lakshmi wants to break the marriage without giving him a chance to explain. He tells her that he will sign the divorce papers and divorce Lakshmi as she wants.

He doesn’t care for Lakshmi, who left the house and also ended the relation. He tells that its good actually that Lakshmi has sent the signed divorce papers to end their marriage. Lakshmi and Rishi’s marriage gets under threat because of Rano’s evil motives. Rano clearly tells Rishi that Lakshmi demanded the big alimony amount from him. Rishi is ready to give away anything to Lakshmi to repent his actions. Virender and Neelam stop Rishi from signing the divorce papers. Will Rishi also sign the papers and fulfill Rano’s motives? Keep reading.

Ayush goes to sleep. Rishi doesn’t want to meet Lakshmi, she isn’t his crush. He also sleeps beside Ayush. Lakshmi thinks the divorce will separate Rishi and her, but nothing can separate their hearts. Rishi gets restless thinking of Lakshmi. He takes Ayush’s phone to call Lakshmi. Lakshmi checks Ayush’s call. She doesn’t take the call. Rishi tries once again with a hope. She takes the call this time. Rishi gets to hear her voice. Lakshmi senses his silence and cries. She takes his name. He says Lakshmi, and she disconnects the call. They both think of each other and shed tears.

They struggle to get a sleep. They still miss each other. Karishma and Sonia are angered that Rishi is giving importance to Lakshmi. They think Malishka’s insecurities were right, she has done right, because Rishi is really after Lakshmi. Neelam tells that they are thinking wrong, Lakshmi should have never left the house. Sonia asks her if she wanted a bahu like Lakshmi. Neelam asks her to be with elders and learn from their experience. She asks Karishma to stop Sonia when the latter says anything wrong. Karishma tells that she didn’t think Sonia said wrong. Sonia tells that Rishi fought with them and left.

Neelam tells that he wasn’t fighting, he was stating his opinion, he is getting tortured, he has to express his emotions to them. She tells that he can tell them anything from his heart, he didn’t dictate his decision. She asks Sonia not to be judgemental. She tells that she can’t speak bad about her brother just because she doesn’t like Lakshmi. She tells that she won’t tolerate it. Karishma can’t believe it that Neelam wants to bring back Lakshmi to Rishi. Rano finds Pritam sleeping. She goes out and gets the divorce papers. She tells that she will get Lakshmi divorced. She takes Lakshmi’s thumb impressions by her clever mind.

Next day, Rano meets Oberois. She asks Neelam where is Virender. Karishma asks why does she ask. Rano asks Dadi to slap Karishma and control her. She asks Neelam why is she supporting Lakshmi so much, what secret is hidden, why did Neelam get Rishi married to Lakshmi when he was in love with Malishka. She asks the reason. Neelam asks her to have food and leave. Rano misbehaves with Neelam. Sonia asks Neelam how can she hear this nonsense. She warns Rano and asks her to get out. Rano asks how does she get such an attitude. She tells that they tortured Lakshmi, they all should die by shame. Sonia asks her to mind her language.

Virender and Ayush come and find the drama happening. Virender asks Sonia to let the elders do the talking. Rano tells that Lakshmi didn’t come to say it, but she has sent the divorce papers. She tells that they have cheated Lakshmi, she can’t be treated like an animal, she wants her rights, she wants an alimony. Neelam tells that Rano is lying, this can’t be true. Rano asks them why are they asking her, Lakshmi won’t take their calls, because she doesn’t want to keep any relation with them. Rishi thinks to call Lakshmi. He calls her. Lakshmi still searches for a job. She takes his call. Rishi loses his courage. He disconnects the call. He thinks she would feel bad. He calls her again to talk.

She tells that she didn’t see the number, so she answered. She disconnects. He leaves for office. Ayush stops him and asks him to trust him. He asks Rishi to just call Lakshmi and apologize to her. Rishi tells that he tried many times, he won’t do anything now. He doesn’t want Ayush to emotionally blackmail him. He goes downstairs. Ayush worries. Virender tells that Lakshmi can never do this, she can never break relations with them. Rano asks why can’t Lakshmi do this, she won’t come back to live a suffocated life. He tells that bad has happened with all of them. Neelam and Virender rebuke Rano. Rano tells that Lakshmi has got to know their true faces and fake love.

Reviewed Rating for Bhagya Lakshmi 20th January 2022 Written Update News for Rishi: 4/5 This rating is solely based on the opinion of the writer. You may post your own take on the show in the comment section below.