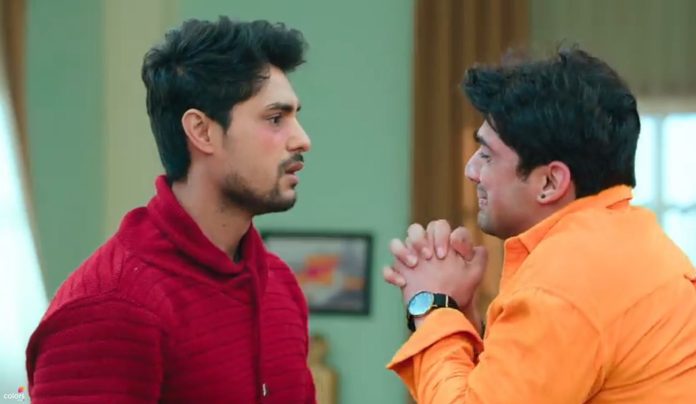 Udaariyaan 19th January 2022 Written Update Surprise Shock Jasmin calls Fateh and asks him to reach his house immediately, since her surprise has reached home already. Fateh doesn’t understand what is her surprise when she tells him about it. He asks her what is she saying. She tells him that he should not think of Tejo and just run to see his family. She asks him to save his family if he can. Fateh gets helpless to run home to see his family. He gets too worried for them. Fateh was happily celebrating that Tejo has finally forgiven him, after all he had saved Rupy from the goons and didn’t show off his favor to impress her.

His nice gesture wins her heart. His happiness gets shortlived because of Jasmin. He reaches home in tension, while Fateh’s strange runaway gets spotted by Tejo and Angad. Fateh meets his family and is relieved to find them fine. He gets surprised seeing Amrik, but is later shocked when Amrik breaks down in front of the family, citing the accident twist plotted by Jasmin. Amrik tells them that Jasmin has put him into a big trouble, there is no scope of getting saved from the police now. He tells how he had become responsible for a man’s death, and how Jasmin has started blackmailing him with the proof being in her hands.

He asks Fateh to save him from Jasmin’s evil plans. Fateh and Virks are shocked to know about the accident. They aren’t aware that Jasmin had planned the fake accident. Angad finds Tejo rushing to Virk house to meet Fateh. He stops her on the way and takes her with him forcibly. She asks him how can he take her like that, and where is he taking him. He doesn’t answer her, and drives off. He also plans to surprise Tejo. Jasmin’s surprise shock finally comes out in front of the Virks, when Amrik tells them the truth. Amrik tells Fateh that he is really scared. He begs Fateh to save him. Fateh hugs Amrik worriedly. What will happen with Fateh and Tejo now? Keep reading.

Virks are happy discussing Simran and Buzo’s marriage. They want Simran’s marriage to happen in a grand way. Amrik comes home and shocks them by his terrified state. They rush to Amrik and ask him why isn’t he saying anything. They ask him to tell the matter that’s bothering him. Amrik breaks down and hugs Khushbeer. He tells Khushbeer that he is stuck in a bad mess and he finds no way out now. Khushbeer asks him to be clear and tell them the truth. Fateh arrives there and finds the family consoling Amrik. Amrik tells them about the accident that happened by his hands, and also about Jasmin who acted to help him till now, and then showed her true colours.

Amrik tells Fateh that Jasmin was with him after the accident happened. Fateh can’t believe that Jasmin has framed Amrik for her motives. Amrik reveals to them about the entire incident how he fell into Jasmin’s big trap. Fateh asks if this was Jasmin’s surprise. Amrik tells that this was the surprise she was talking about to shock them. Jasmin celebrates her time thinking of the surprise that Virks received. She wants Fateh to find some way out if he can. She thinks to inform Angad about her plan’s success. Angad stops Tejo and takes her with him in the car, while she is clueless about Angad’s strange behavior. Angad doesn’t tell her anything and takes her.

Fateh and the entire family console Amrik, who is too scared to think of anything. Fateh asks Amrik what does Jasmin want, what did she tell him. Amrik tells that he doesn’t know what she wants, but she told him that she will keep the demand in front of the entire family, she will not spare any of them. He tells that she hinted of taking her revenge on them. He apologizes to the family and feels guilty. The family consoles him and tells him that nobody can touch him when his family is along. He worries that a person died by his hands, and now he will die by the hands of the law.

Fateh tells that he will not let Amrik’s life get ruined. He feels guilty that he had loved Jasmin and then realized her truth, but it got too late till he realized. He apologizes to Amrik and the family. He asks Khushbeer to let him call Jasmin and know her demands. He calls Jasmin, but she makes him desperately waiting. She doesn’t take his call. Amrik tells that Jasmin said she will come home and tell them what she wants. Khushbeer doesn’t want Jasmin to come to his house. Fateh explains that they have to accept Jasmin’s demands, else they can’t save Amrik, who is totally trapped. The entire family discusses and decides to speak to Jasmin. Amrik calls Jasmin and tells her that his family wants to meet her.

She asks him to invite Sandhus and Tejo also. She wants to make a rocking entry and shock them. The family worriedly waits for Jasmin to know her demands. Gurpreet informs Satti about Jasmin’s move and asks Sandhus to come home. Satti and Rupy feel cursed to get a daughter like Jasmin. They rush to Virks, and apologize on Jasmin’s behalf. They find Amrik shaken up. Khushbeer blames them for not controlling their daughter and letting her ruin lives. Rupy assures that he will find a way to end Jasmin’s madness.

Later, Angad takes Tejo with him and confesses love, while she gets scared of his madness and tries to run away. He stops her and tells her that he loves her a lot. She tells him that she doesn’t love him, she just loves Fateh. He tells that Fateh doesn’t love her, he is just a fraud. Tejo angrily slaps him and awakens the devil in him. Jasmin arrives to Virk house, dancing and celebrating her way. She keeps her shocking demands in front of them.

Reviewed Rating for Udaariyaan 19th January 2022 Written Update Surprise Shock: 2/5 This rating is solely based on the opinion of the writer. You may post your own take on the show in the comment section below.