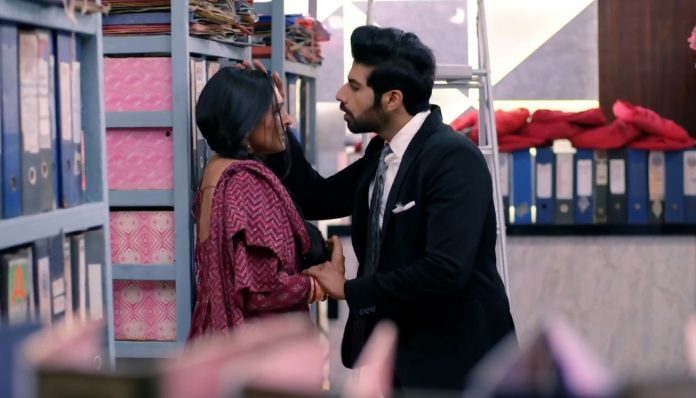 Bhagya Lakshmi 21st January 2022 Written Update Lakshmi molested Rishi learns from Rano that Lakshmi wants a divorce. He angrily reacts and tells that he will sign the divorce papers and fulfill Lakshmi’s wish. He adds that he is happy that Lakshmi has sent the papers herself and made things clear from her end. Neelam and Virender worry and try to stop Rishi from making another mistake. On the other hand, Lakshmi bags a job. The man asks her to come along, he will explain her the duties of work. He takes her to the storeroom to show some files. He kicks the ladder to make Lakshmi fall down. He holds her close and acts of saving her. The man misbehaves with Lakshmi and tells that he was pretending till now to get close to her.

Lakshmi is shocked to know his real intentions. Rishi feels strange on sensing that Lakshmi might be in danger. Later, Neelam and Ayush visit Pritam and Rano at their house. Pritam asks Neelam how did she come. She asks Pritam to call Lakshmi home right away. She tells Rano that she will not let Rishi and Lakshmi’s divorce happen. She challenges Rano. Ayush is happy that Rishi’s divorce isn’t happening. Lakshmi gets molested by that man in the office, while Rishi reaches there. Will Rishi become Lakshmi’s savior like before? Keep reading.

Rano asks him to check the alimony clause. Rishi leaves in a huff. She asks Neelam for a glass of water. She tells that its Rishi and Lakshmi’s matter. Virender asks her why does she have poison in her heart, she doesn’t love Lakshmi. She tells that she isn’t dual faced, he also doesn’t love Lakshmi because he compelled her to leave the house at midnight. She tells that Lakshmi came to her house to get a shelter, because they don’t lie to her. She taunts the family for cheating Lakshmi. Neelam calls it enough. She asks Rani not to say a word anymore. She tells that Virender is Lakshmi’s dad by his heart. She defends her husband and family. She admits that Rishi has made a mistake, but the family is not at fault.

She asks Rano not to force her to fall to her level. Rano asks what did she do. Neelam tells that Rano doesn’t deserve to be an aunt, she is a dealer who has come to take money. She tells that Rishi had to marry Lakshmi, it was important. Rano tells that they thought Rishi will get serious in life if he marries a village girl. She declares that Lakshmi will fight for her rights. Virender praises Lakshmi who filled love and happiness in the family. Neelam reminds Rano that she was getting Lakshmi married to Balwinder, who was married twice before. She asks Rano to stop her fake pretence and leave.

She counts Rano’s mistakes. She remembers everything wrong done by Rano and makes her speechless. She insults Rano and asks her to leave the house. She tells that Rano can’t be trusted, Lakshmi can’t send the divorce papers. She doesn’t believe it. She tells that she will believe it only if Lakshmi gets the divorce papers. Virender tells that Rano would have threatened or emotionally blackmailed Lakshmi, or taken the thumb impression against her knowledge. Rano tells Neelam that she will get an answer for the insult. She threatens Neelam of her strike and leaves. Rishi and Lakshmi are at the same office building.

He sees her and she gets hiding from him. Ayush calls him to talk about Lakshmi. He asks Rishi not to go to Lakshmi’s house. Vishal asks Rishi to sit in his cabin until he comes back. Lakshmi goes to meet the HR Manager Vishal. Vishal asks Rishi to give the questionnaire to the girl who is coming for the interview. Lakshmi comes to Vishal’s cabin and doesn’t see Rishi. Ayush and Neelam visit Pritam. She asks him to call her and ask her to come home. Pritam makes a call. Lakshmi sits, while Rishi passes the form to her without seeing her face. They don’t see each other. In a filmi way, they share the coffee from the same cup and still stay ignorant, while being engaged in the work.

They finally get to see each other in the cabin, and have a moment. Lakshmi’s boss tells her that she has to meet HR Vishal, not the other Vishal. Rishi tells that he is Vishal’s friend. Lakshmi apologizes and makes a leave. Rishi rushes to meet Lakshmi. Lakshmi meets the HR manager Vishal. Rishi tells his friend Vishal that he is okay. He stays lost. Vishal asks him to come with him. Rishi thinks of Lakshmi. Vishal tells that they will discuss the event. HR Manager Vishal tells Lakshmi that she has to do cleaning and dusting of the storage room, she has to do record keeping. She takes the job and thanks him. She falls into a big trouble.

Reviewed Rating for Bhagya Lakshmi 21st January 2022 Written Update Lakshmi molested: 4/5 This rating is solely based on the opinion of the writer. You may post your own take on the show in the comment section below.