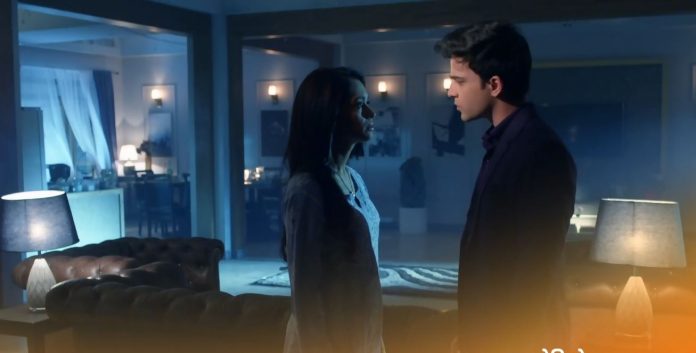 Kumkum Bhagya 21st January 2022 Written Update Ultimate truth Prachi and Rhea get engaged in a new argument, even after Ranbir lashed out at them for their never-ending quarrels ruining the family peace and prestige. Prachi and Rhea are still fighting for Ranbir, their rights on him and the family. Rhea tells that Prachi would have snatched the room, but Ranbir will never come to stay with her. Prachi clears her misconception saying she didn’t come back to get Ranbir’s love, but just for her rights. She tells Rhea that she very well knows that Ranbir still loves her, and that too extremely, but she isn’t interested in reciprocating his love.

She tells that Ranbir’s heart just beats for her, not for anyone else. Rhea gets confused hearing Prachi’s mixed emotions. Ranbir returns home and meets Prachi. He recalls her hurtful words. He tells Prachi that she can do whatever makes her happy and he will do whatever makes her happy, because he cares for her. He adds that they will have a different path and live separated. Prachi is hurt by his words. Shahana finds them arguing. She thinks she should tell the truth to Ranbir, because the baby might become the connecting link between Ranbir and Prachi. She goes to tell Ranbir. She tells him that he is the person who should know the baby’s truth. He gets puzzled, thinking he has no connection with Shahana’s coming baby. Shahana means to hint him about Prachi and Ranbir’s baby. Wish the baby’s truth really gets known to Ranbir. Keep reading.

Prachi thinks of Ranbir’s words. Rhea meets her. Prachi tells her that Ranbir got her freed from the jail and got her home. She calls Rhea a big fool. Rhea asks her to keep the room, she doesn’t care because Ranbir isn’t with Prachi. Prachi tells that she doesn’t want Ranbir to be with her. Rhea doesn’t understand what Prachi wants. Prachi tells that everyone understood Rhea’s motives. Keep reading.

She tells Rhea that Ranbir left all his important work, he came to bail her out because he still loves her a lot. Rhea tells that Ranbir doesn’t love her. She reminds what Ranbir told them, he just worried for the family respect and so he bailed out Prachi. She asks Prachi to not be mistaken, he was just doing his duty, she is out of his heart and will be out of his house as well. She tells that she will prove that she is the bahu of the house. She asks Prachi to see Ranbir and her marriage in the Lohri function. She wants Prachi to accept the truth. She leaves Prachi with a warning.

Prachi calms down her temper for the baby’s sake. She talks to her baby about Ranbir. She tells that Ranbir loves kids a lot, he got so happy thinking Shahana is pregnant, he will be very happy knowing its his baby. She wanted to tell him about the pregnancy, but the past moments stop her. She tells that she couldn’t tell Ranbir the truth of her pregnancy, which would have given him the biggest joy of his life. She fears their separation. She apologizes to the baby. Ranbir gets gloomy. He walks on the road, thinking of Prachi. He wants to take care of Prachi and become her friend. He goes mad that she regards him an enemy. He can’t take the tensions more. He speaks to a guy sleeping on the roadside.

The guy tells that he has a big house, but he got on the road because his wife ousted him from the house. He shares his problems with Ranbir. He tells that one shouldn’t say sorry to wife, else she will make him apologize all the life. Ranbir asks shouldn’t he apologize when its his mistake. The guy tells that if he apologizes, then the wife will take him for granted, he can apologize on the mistake made, but not when he isn’t at fault. He advises Ranbir.

Ranbir thanks him. He thinks to drink, but stops thinking of Prachi. The guy finds Ranbir madly in love that he didn’t drink thinking of his wife. He asks Ranbir to share his love story. Ranbir shares his love story. He tells that his life is too complicated. The guy tells that its not complicated, he should make Prachi jealous by getting sweet towards Rhea, then Prachi will come back to him and also confess her love.

Reviewed Rating for Kumkum Bhagya 21st January 2022 Written Update Ultimate truth: 5/5 This rating is solely based on the opinion of the writer. You may post your own take on the show in the comment section below.