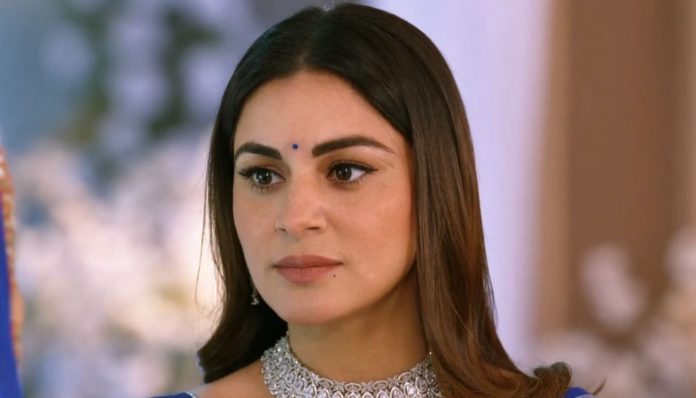 Kundali Bhagya 21st January 2022 Written Update Preeta fights Prithvi Karan tells Preeta that she is behaving like he is a one-sided lover. He professes his feelings to her. She asks him what kiddish things are he talking, he is talking about love when she isn’t interested. She tells that she has to rush and deal the business meetings. Karan gets upset with her. She feels sorry to hurt his heart by the rude behavior. She is happy that he is concerned for her, he had tried to find her, because he still loves her. She thinks her decision to return home is really right. Sherlyn asks Janki not to threaten her and stay in her limits. Janki reminds that Sherlyn stopped her for the talk. She tells that she can really threaten Sherlyn. Natasha tells that she doesn’t like to hear any threatening.

Janki insults Sherlyn and Natasha also. She tells that she will keep an eye on them, she wants their betterment also and that’s why she is warning them to reform. Natasha tells that Janki is good in delivering powerful dialogues. Janki tells that Sherlyn is the villain residing in the Luthra family. She tells how Sherlyn crossed her limits and ousted Preeta from the house by accusing her. Sherlyn calls her an old mad woman. She asks Janki did she come to fight her. Janki tells that she has come for Preeta’s sake to be her shadow and protect her.

She tells that she will not tolerate anything against Preeta. The argument goes long. Janki goes away. Natasha tells Sherlyn that they shall find Prithvi first. She feels Shrishti is a big problem for them. Sherlyn tells that Shrishti and Janki always torture her. Natasha asks her not to get tortured, but fight back. She tells that they can give a good reply to Preeta and Shrishti. Sherlyn asks what does she mean. Natasha tells that Preeta has come to conquer the house and now Shrishti has come and kidnapped Prithvi. Sherlyn finds her right.

Natasha asks her to take some step. She is worried that Preeta is attracting Karan to herself. She thinks Karan belongs to her. She doesn’t want to lose Karan. She tells that she will start her plan. Sherlyn tells that Karan will never come close to her now, the plan won’t work, Natasha should leave because the work isn’t done. She tells that she will lie to the family about her exit. While they argue, the cupboard opens up on its own. They find Prithvi locked up inside the cupboard. They get him out of the cupboard and free him up. He gets conscious when they sprinkle some water over his face.

Sherlyn asks him is he alright. He asks her how did he reach here. She asks him if he doesn’t remember it. She tells him the shocking news that Preeta is alive, she has ruined his party, she has taken the business contract from his company, she headed the project. She adds that Shrishti had fainted him and locked him here. He yells in anger at Preeta and Shrishti. He tells that he will take revenge on them by one strike that ruins them. He tells Sherlyn that Preeta and her sister will regret all their lives for messing up with him.

Janki tells that the marriage isn’t right, its a bad one because of a bad life partner. Kritika tells that her marriage isn’t a bad one, its the best for her, Prithvi doesn’t treat her badly. She tells that he never hit her in anger, he is a nice person, he had done wrong in the past, nobody likes him in the family, he actually helped the family, he still kept them in the house when he could have ousted them. She tells that he is doing a son and husband’s duty, he is helping them, he can’t be a bad person, he is just misjudged.

She doesn’t believe that he is a bad person. She tells that Mahesh has given everything to Prithvi by his wish knowing the latter is capable of handling things. She tells Janki that Preeta is a bad person, she came back as the house owner, she treats the family as slaves, she is a liar and greedy woman who cheated them, she did the fraud and took Mahesh’s signatures to oust Prithvi and them. Janki defends Preeta. Kritika tells that Preeta has done a fraud with them. She has much in her heart, but doesn’t want to tell her. Janki regrets seeing the family losing their minds. She tells that Sherlyn and her sister are doing something wrong, they have some secret. She is sure that Sherlyn is still involved with Prithvi.

She thinks to tell Preeta about her findings. Janki tells Preeta that she wants to tell her about Sherlyn, who isn’t trustworthy, Sherlyn and Prithvi are together. She tells that Sherlyn is acting helpless, that Rishabh left her alone, but actually she makes other helpless. She reminds Preeta how Sherlyn insulted her and ousted her from the house. Preeta remembers everything how Sherlyn had questioned her intentions. Preeta tells that she isn’t the old Preeta to trust anyone so easily. She has changed now because of the family’s misbehavior. She tells that she will not give any chance or forgive the wrongdoers, she will punish them.

Reviewed Rating for Kundali Bhagya 21st January 2022 Written Update Preeta fights: 5/5 This rating is solely based on the opinion of the writer. You may post your own take on the show in the comment section below.