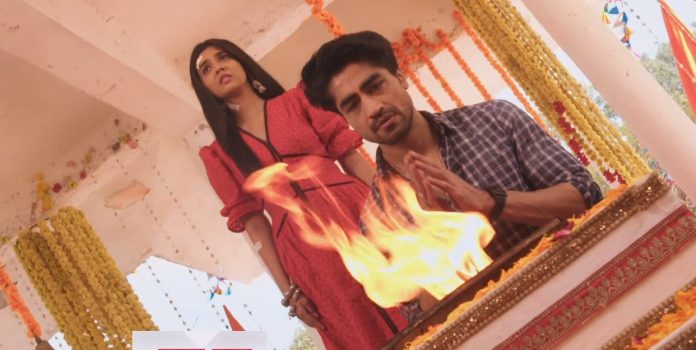 Abhimanyu tells Akshara that something opposite happens when he gets very happy. He says he got very happy meeting her and she went away. Akshara tells Abhimanyu to get straight and come down. Abhimanyu asks Akshara if his life would go in the opposite direction if he comes down straight. Akshara says no and helps Abhimanyu in coming down from the tree. Abhimanyu breaks down seeing Akshara in front of him and sits on the ground. Akshara too sits on the ground. Both of them caress each other recalling their past moments. They apologize to each other for hurting each other for them. Abhimanyu returns Akshara her bracelet.

Both of them hug each other tightly and cry in happiness. They hit each other’s head by mistake and smile with tears in their eyes. On the other hand, Kairav continuously knocks Akshara and Aarohi’s room door. He opens the door by pushing it and gets shocked to see it empty. Aarohi comes dressed in a bridal outfit. She asks Kairav how she is looking. Kairav remains silent and Aarohi praises herself. Aarohi tells Kairav that she is excited about her marriage with Abhimanyu. Kairav looks at Aarohi with anger. Abhimanyu tells Akshara that they get restless thinking about each other. He explains to Akshara that they smile with and for each other.

Abhimanyu asks Akshara to run away with him, get married to him and live together happily. He asks Akshara if she will marry him. Akshara agrees to marry Abhimanyu and smiles. Abhimanyu gets happy with Akshara’s agreement to marry him. Both of them smile. Akshara tells Abhimanyu that they will get married to each other after convincing their families. Abhimanyu says he won’t return home till Manjiri returns as everyone else just understands profit making conversation, not love. He tells Akshara that he is just concerned about their love and marriage. Abhimanyu tells Akshara they will manage and convince everyone after getting married.

At Goenka Mansion, Kairav tells Aarohi that she is looking lovely like a princess. He asks Aarohi about Akshara’s whereabouts. Aarohi worries about Akshara’s whereabouts. She asks Kairav to worry about her marriage preparations as it should be best. Kairav leaves on Aarohi’s insistence. Aarohi feels tense thinking about what happened in her and Akshara’s room in her absence as she found the room scattered. Abhimanyu asks Akshara till when she will think about other people’s hearts. Akshara tells Abhimanyu that her mother used to say that “love” becomes precious when it gets family’s support and blessings.

Akshara tells Abhimanyu that she needs to talk to Aarohi first as she is her promise which she made to herself. She says she can’t lie or hide the truth anymore. Abhimanyu tells Akshara that if her intentions are right then nothing bad will happen to her. He agrees to go on with Akshara’s decision. Akshara thanks Abhimanyu for agreeing to her decision even after what she did with him. She sees the time 4:44pm and tells Abhimanyu that it’s Angel’s time. They hug each other tightly. At Birla house, Manjiri returns. Harshvardhan says he doesn’t know where Abhimanyu went. Manjiri sees Neil and understands what has happened. She tells everyone that Abhimanyu won’t come by anyone’s call, not even hers. Manjiri says Abhimanyu will listen to his heart only. She says she also wants Abhimanyu to do what his heart says.

Harshvardhan gets angry hearing this. Manjiri tells Harshavardhan that she will not call or stop Abhimanyu today. She says that now she will let Abhimanyu do what he wants to do. Harshvardhan angrily looks towards Neil. On the other hand, tells Abhimanyu that she needs to talk to Aarohi. Aarohi’s call can be seen arriving on Akshara’s phone. At Birla House, an angry Harshvardhan asks Manjiri to tell if she knows anything. Anand asks the same thing to Manjiri with politeness. Harshvardhan receives Manish’s call and lies to him that all preparations are done for marriage. Manish says they are too ready to welcome “Baraati’s”. Harshvardhan warns Manjiri that he won’t tolerate it if something troubling happens.

Akshara tells Abhimanyu that she needs to talk to Aarohi face to face. Abhimanyu agrees with Akshara. At Goenka Mansion, Aarohi worries about not being able to talk to Akshara. She thinks if something bad happened. Swarna and Suhasini praise Aarohi’s bridal look. Suhasini wards off the evil eye from Aarohi. Aarohi doesn’t see Akshara’s call being busy with Swarna and Suhasini. Akshara feels worried thinking why Aarohi is not picking up her call. She thinks if everyone in the family got to know the truth. Abhimanyu says everyone would be calling them if the truth would have been revealed. He asks Akshara to not be worried, saying that everything would go fine.

Akshara says to Abhimanyu that they need to tell their families the truth. They decide to return home to give a test of their love. At Birla house, Manjiri gets to know everything from Neil. Neil says to Manjiri that a lot of drama will surely happen. He says at least three lives will get saved from getting ruined if Abhimanyu and Akshara reunite. Neil says everyone will take a little time to understand Abhimanyu, Akshara and their situation. Manjiri prays to God to make everything go fine. At Goenka Mansion, Goenkas are seen warding off evil eyes from Aarohi. They get shocked to see her room window broken. Suhasini says it’s a bad sign (Apshagun). Aarohi lies and says she broke it by mistake.

Kairav Asks Aarohi about Akshara. Aarohi lies that Akshara went to plan a special surprise for her. Manish and Akhilesh say girls are difficult to understand. Kairav feels that something off is going on. On the other hand, Abhimanyu tries to calm the tensed Akshara. In the next episode, Abhimanyu will ask Akshara to consider it as a sign of Mahadev. He will tell Akshara that they will marry each other here and right now. Birlas will tell Goenkas that they came with full preparations but Abhimanyu is missing. This will shock Gonekas and Aarohi.

Abhimanyu will be seen taking Akshara with him to a temple. Aarohi will tell everyone that Akshara is missing too. This will shock everyone. Aarohi will leave to reach Abhimanyu and Akshara. Before leaving she will say that Akshara is trying to snatch her dreams from her. She will say that she won’t let this happen. Akshara and Abhimanyu will be seen sitting in front of the havan kund in the temple.

Reviewed Rating for Yeh Rishta Abhi Akshara Wedding Twist 21st January 2022: 5/5 This rating is solely based on the opinion of the writer. You may post your own take on the show in the comment section below.