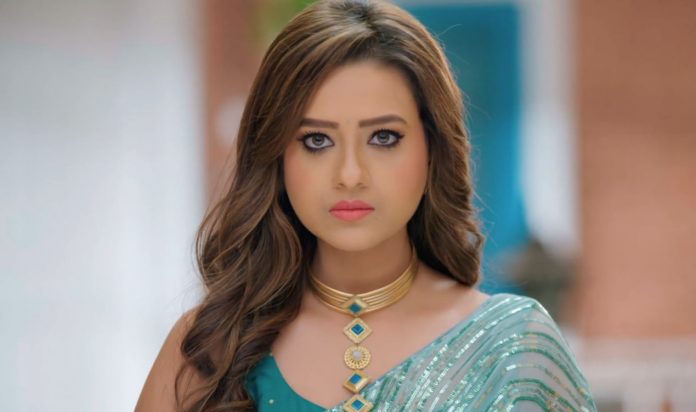 Anupama 22nd January 2022 Written Update Kavya returns Anupama says if a person knows his/her goal, he/she finds the way to it on its own. She tells Pakhi that Samar knew his goal even though he wasn’t good at academics. Anupama says Paritosh knew his goal. She tells Pakhi that she needs to find out her life goal first at present. Anupama explains to Pakhi that she will soon get tired if she will wander here and there without knowing her goal/destination. She further explains to Pakhi that every child and his/her wishes are different like someone wants to become a doctor, engineer, teacher and artist etc.

Anupama tells Pakhi that she is seeing the dreams that she borrowed from her friends. She asks Pakhi to see her own dreams. Anupama says that nowadays children follow their peers and consider their dreams as their dreams. She tells Pakhi that a person gets successful by following their own heart, not others. Anupama advises Pakhi to hear what her heart says. She explains to Pakhi that she will have nothing to do, if she doesn’t find her life goal. Anupama makes a promise to Pakhi that she will help her anyhow to reach her goal once she (Pakhi) finds and decides her goal.

Anupama asks an irritated Pakhi to not see towards Vanraj. She tells her that she can’t go to the USA till she proves what she wants to do in life. Anupama asks Vanraj to tell if she is wrong anywhere. She asks Pakhi to study hard to win a scholarship as Paritosh advised her. Anupama tells Pakhi that after she proves herself, they would decide to send her wherever she wants to go. Pakhi agrees and Anupama wishes her “All the best”. Anupama tells Pakhi to make her heart understand to not be so obstinate as otherwise she will feel a lot of pain if life will explain itself to her. She sees Vanraj and the latter glares at her in anger.

Bapuji asks everyone to finish the matter and celebrate the festival. Malvika takes Pakhi with her. Anupama thinks Pakhi has grown up but doesn’t understand things like kids. Vanraj asks Anupama if she wanted to prove him and his decision wrong by her lecture. He says he can’t always be wrong if he once made a mistake. Anupama tells Vanraj that he always thinks wrong like he thought today. She asks Vanraj how and why he takes her words to himself. Anupama tells Vanraj that whatever she said downstairs, she said for Pakhi’s good, not to prove him wrong. Vanraj asks Anupama if her intentions were right then why she asked Malvika to not talk in between them as she lets Anuj to do so.

After some time, Vanraj is seen performing Sankranti pooja with his family and Kapadias. Anuj notices that Pakhi is upset. Vanraj gives Aarti thali to Malvika after himself and this irks Anupama. Anupama helps Malvika with her aarti diya. Both Malvika and Anupama perform aarti together. This irks Vanraj. Bapuji explains festivals and family love to everyone. Everyone leaves for kite flying. Anupam prays to God to give her some courage this time. Malvika feels excited about kite flying. Anuj stops her and tells her that he needs to talk to her. He explains to Malvika that friendship has its own place. Anuj further explains to Malvika that sometimes a person should remain quiet in some situations.

Malvika says she was just trying to help. Anuj says to Malvika that he knows she is smart to understand life situations, her mistakes, apologizes for her mistakes and won’t repeat them. GK explains to Malvika that Anupama may belong to them now but the latter’s relationships are her own. Malvika says she will be careful next time. Anuj requests Malvika to be careful of Vanraj as his life is complicated. He explains to Malvika that friendship is good but if something goes wrong everything would get ruined. Malvika says she understood. She takes GK and Anuj for kite flying. Anupama thinks about Nandini’s whereabouts. She feels tense as she didn’t even find her cycle at her regular place.

Bapuji announces a kite flying competition. Vanraj says nobody can defeat him today. Baa and Paritosh remind Vanraj that last time Anupama won even after she fled kite for the first time after marriage. Vanraj says he and the situation both have changed. Anupama tells Vanraj whether the situation changes or not but he keeps changing. She asks him to not underestimate his opponents. Anupama serves sweets to everyone. She apologizes to Malvika for interrupting her conversation. Malvika sarcastically tells Anupama that she forgot everything and asks her to forget too. She apologizes to Anupama and the latter also jokes with Malvika in her way. Both of them laugh and hug. Anuj feels happy seeing Anupama and Malvika’s growing bond.

Anupama tells Samar that he is missing Nandini. She asks him to call her if he is really missing her. Samar says he asked Nandini to come but it’s her choice if she doesn’t want to come. Anupama asks Samar to go and convince Nandini. Before Samar can go to convince Nandini, Malvika asks everyone a puzzle. Baa jokes by giving an answer. Vanraj gives the correct answer and Malvika asks him why he always needs to give the right answers. Pakhi finds it difficult to decide what color kite she should fly. Anupama asks Pakhi to not think about others’ opinions and choose the color that she wants to fly as she has to fly it.

She explains to Pakhi that mothers seem like enemies but are not enemies in real life. Anupama requests Pakhi to make a decision about her life by thinking about everything carefully. Vanraj fumes seeing Pakhi and Anupama together. Kinjal and Paritosh announce that everyone will have to take out a chit with their dance partner’s name. They also tell everyone that the person with a blank chot won’t be allowed to choose his/her dance partner. Everyone takes out chits excitedly. Baa gets GK as her dance partner. GK teases Bapuji. Kinjal gets Samar as her dance partner. Paritosh gets Pakhi as his dance partner. Bapuji’s dance partner is Mamaji. Anupama and Malvika get blank chits.

Vanraj announces Malvika as her dance partner. This angers Anupama. Malvika goes to Vanraj. Anuj announces Anupama as his dance partner. Anupama gets shocked to see a blank chit falling from Vanraj’s pocket. Anuj tells Anupama that fate wants to bring them together. He asks Anupama what happened. Anupama says everything is fine. Vanraj asks Malvika to get ready to win. In his thoughts, he thinks that he has stopped getting defeated. Both Anupama and Vanraj glare at each other.

In the next episode, everyone will dance and fly kites with their partners. Vanraj will ask Malvika to not worry as her string as well as game is in his hands now. Anupama will tell Vanraj that the player is not in his hands. Vanraj will get angry. Kavya will return and cut angry Vanraj’s kite.

Reviewed Rating for Anupama 22nd January 2022 Written Update Kavya returns: 3/5 This rating is solely based on the opinion of the writer. You may post your own take on the show in the comment section below.