She tells Harleen that Sarab told her that after him and Meher, she is the one who loves them the most. Harleen says Sarab used to tell the truth. Seher tells Harleen that she never did discrimination between her and Meher. She says an aunt is someone who hugs like a mother, understands things in heart like a sister and supports in every problem like a friend. Seher asks Harleen if she truly loves her and her love (Raj). Harleen stands confused. Robbie asks Seher why is suddenly talking differently. Seher tells Robbie that this thing has been going on since long.

She tells Seher that she just wants her and Param’s rights safe. Harleen says everyone accepted Karan but she can’t as he is not their (Gills) blood. She asks Seher what is her mistake in this. Seher tells Harleen that Karan, Param and she are each other’s life. She requests Harleen to not try separating three of them from each other. Harleen folds hands in front of Seher and tells her that she has realized her mistakes. Seher tells Harleen that she knows her thinking about Karan is wrong and asks her what is Raj’s mistake in it. Harleen breaks down and asks Seher to forgive her. Raj makes Harleen stand and tells her that she is like their family even if she doesn’t consider him her family.

Seher requests Harleen to remember that Seher and Raj are one (Sehraj) and won’t ever get separated. Raj and Seher leave. Harleen wipes her tears and tells Robbie that Seher has gone blind in Raj’s love. She says Seher can’t see that she wants her and Param’s betterment. Robbie tells Harleen that he thought she really apologized to Raj. Harleen says that she won’t ever apologize to Raj. She further says only Param and Seher are Gill’s heirs. Harleen feels frustrated and says no one understands what she wants. She tells Robbie that she won’t stop trying to remove Raj and Karan from the Gill family. Harleen says for this she can make the whole family her enemy for her motive.

Next morning, Karan asks Param if he is excited about the date. Kulwant asks Karan to not tease his elder brother. Kulwant, Bittu and Ranna say that they found Amreen a good and cultured girl. Harleen says Devika and Param are royal and look good with each other. She says Amreen’s father is a junk seller and buyer. Seher tells Harleen that a person is identified by his/her behavior and heart not by money. Seher says royalty can be achieved by birth, but Amreen’s father earned everything by his own efforts. Kulwant says a desi person’s heart is pure as gold. Seher says Param should choose his wife by seeing the girl’s heart, not her parents.

Param says he is thinking of meeting Amreen once. Harleen thinks she won’t let Amreen become Gill family’s daughter in law at any cost. On the other hand, Amreen’s parents tell Amreen that they have earned enough but people still call them junk sellers and buyers. Amreen tells her parents to trust her that Param would choose her only. At Gill Mansion, Seher gets happy and surprised seeing Raj’s beautiful preparations for her. Raj asks Seher to dab on the center tile. Seher follows Raj’s instructions and sees “I Love You” written on the red tiles. Raj and Seher get romantic and lost in each other. Raj kisses Seher’s forehead. He tells Seher he is happy to see his God (Seher). They say, “I love you” to each other.

Raj doesn’t let Seher leave for swayamvar. Jeeto and Bittu come and disturb Seher and Raj’s romantic time. Seher and Raj go downstairs to support Param on his date, all family is seen there. They hide seeing Param and Amreen coming. Harleen thinks that she will only make Devika, Gill Family’s daughter in law. Amreen asks Param if he would have any objection with her speaking habit. Amreen talks a lot to Param. Seher says real dates are when a couple can go romantic even in household chore’s voices. Raj asks how anyone can get romantic in such a disturbance. Seher goes to the kitchen leaving Raj.

Param fails to give a gift to Amreen in front of family members. Seher and Jeeto make Amreen busy in peeling peas. Raj suggests to Param how to get romantic with his wife. Seher tells Raj that he is giving the wrong lessons to Param and increasing wife’s work. Raj and Seher get romantic aside. Raj secretly gives Seher a naughty kiss on her cheek. Seher escapes Raj and teases him. Harleen gets angry seeing Param happy with Amreen. Everyone calls Param and Karan’s jodi cute. Devika’s parents call and ask Seher if Devika reached for the date. Seher says no. This makes both Seher and Devika’s parents worried. Everyone finds Devika fainted in the hotel room.

They make Devika gain consciousness. Devika says she ordered coffee. She explains that she drank the coffee and doesn’t remember what happened after that. She says someone locked the door after that. Seher thinks about what is happening with all the girls who came for swayamvar. She further thinks who is doing this and why. In the next episode, Harleen will blame Amreen for Devika’s condition seeing a CCTV footage. Amreen will shout at Harleen and will ask her to show off her royalty somewhere else. Seher will angrily ask Amreen to not talk to her aunt like this. She will say that she can’t tolerate anyone talk rudely to her aunt.

Reviewed Rating for Choti Sarrdaarni 24th January 2022 Full Written Update: 3/5 This rating is solely based on the opinion of the writer. You may post your own take on the show in the comment section below. 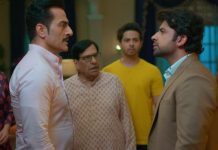