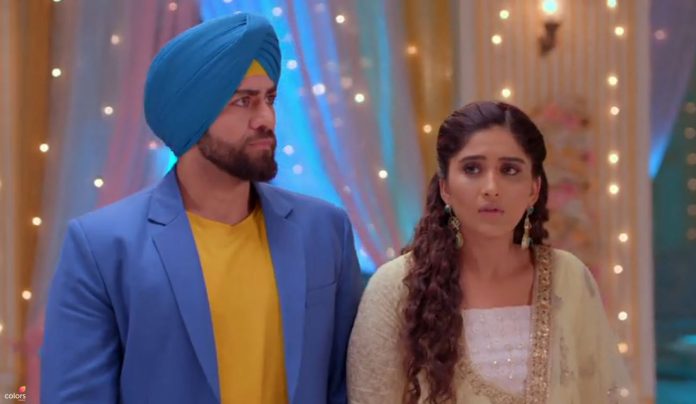 Choti Sarrdaarni 25th January 2022 Written Update Raj Seher Romance Mrs. Bhalla says they would send Devika on a date with Param once she gets well. She says after that Param can make a decision whom he wants to marry, Amreen or Devika. Harleen says there is no requirement for that. Kulwant asks Harleen if she changed her decision. Harleen says she has already been told that she can do anything for her family. In a low voice, Raj asks Seher how Harleen started caring for family and laughs. Harleen asks everyone to watch a movie with her.

She starts the hotel’s CCTV footage where a girl like Amreen is seen placing coffee outside Devika’s room. She also calls the hotel’s manager at Gill Mansion. Hotel manager says that he found Harleen’s locker key in Amreen’s hotel room. Everyone gets shocked. Amreen shouts at Harleen and asks her to not show off her royalty in front of everyone. Seher asks Amreen to not talk to Harleen in this way as she doesn’t like it. Amreen cries and apologizes to Seher for shouting at Harleen. She tries to make everyone believe that she didn’t do anything wrong. Seher tells Amreen that all girls who came to swayamvar can file a case against her.

Amreen’s father requests Seher to understand that Amreen didn’t do anything. Amreen gets angry at Devika for holding Param. Devika makes her more angry by asking everyone to forgive Amreen. Both Devika and Amreen try to pull Param to them. Everyone gets shocked seeing this. Seher asks Amreen and Devika to leave Param. Devika apologizes and says she just wanted Param to not get hurt. Harleen asks Seher to see the difference between Devika and Harleen. Devika’s father says his daughter doesn’t have any tantrums even being a royal princess. Amreen leaves telling everyone that they would regret misunderstanding her after knowing the truth.

After Amreen leaves, Seher asks everyone to forget what happened. Harleen says she always wanted a girl Devika for Param. Param says his parents always used to say that couples are made by god. He further tells everyone that even he thinks that he and Devika are destined to marry each other. Everyone gets happy hearing this. Karan calls Devika “Bhaabi”. He tells her that she won’t get in any trouble in Gill house, till her brother in law is there for her. Devika tells Karan that she trusts him. Param asks Devika’s hand from her parents. Devika’s parents give Param their consent to marry Devika. Harleen tells Robbie that soon Devika will get involved with family like a family member. Seher requests Devika’s parents to stay with them as they are going to be their relatives.

Devika’s father says he can’t live in their daughter’s in-laws house. Harleen convinces them to stay with them at Gill Mansion till Param and Karan’s marriage. Devika’s parents say that they will return soon with their stuff. Everyone decides to get Param and Devika’s roka in two days. Devika, her parents and staff reach their hotel. Devika slaps her father. She asks him why he was overacting so much. Devika further says it’s good that Harleen stopped them. Devika’s pretending father says that he acted perfect. He tells Devika that no royal father would digest his daughter’s insult. Devika’s pretending staff tells her that he asked her to not give her father’s role to this person. Devika’s pretending mother says she is s the one who acts perfectly.

She calls Devika as Aanya and asks her if she is right. Devika asks his pretending family to stay shut as no one should know their reality. She one by one reveals her reality. Devika instructs her family that no one should know their real names and that they aren’t from the royal family, otherwise their two weeks’ efforts would go to waste. She says that she has put many efforts to make each and every girl out of Swayamvar. Devika says it was her who disguised as Amreen and mixed protein powder in coffee using the connecting door and then pretended to be unconscious.

She reveals that it was easy to put Harleen’s lock key in Amreen’s room and trap her. Devika finally instructs her fake family to be careful at Gill Mansion. She asks them to especially save themselves from Seher and Raj. Her fake family agrees to her. On the other hand, Robbie requests Seher and Raj to call Khushi to India, to which both of them agree. Robbie thinks Khushi will return only on her siblings’ requests. Karan and Seher help Param to feel fresh using facial wipes to look good in his Roka. All three of them will make a video call to Khushi. Khushi too gets happy seeing her siblings. They tell each other their cute passwords and laugh. Khushi teases and congratulates Param for finding his life partner.

Seher, Karan and Param request Khushi to return to India and forget the person who cheated on her. Khushi feels bad but gets convinced to return to India because of her siblings’ various requests. She asks Seher to make her talk to her husband. Seher gives her phone to Raj. Khushi gets shocked seeing Raj on the video call. Raj seems to not be able to guess what Khushi is thinking. In the next episode, on one side, Raj and Seher will be seen getting closer as husband and wife. While, on the other hand, Khushi will be seen smiling and happy to meet Raj after a long time.

Reviewed Rating for Choti Sarrdaarni 25th January 2022 Written Update Raj Seher Romance: 4/5 This rating is solely based on the opinion of the writer. You may post your own take on the show in the comment section below.