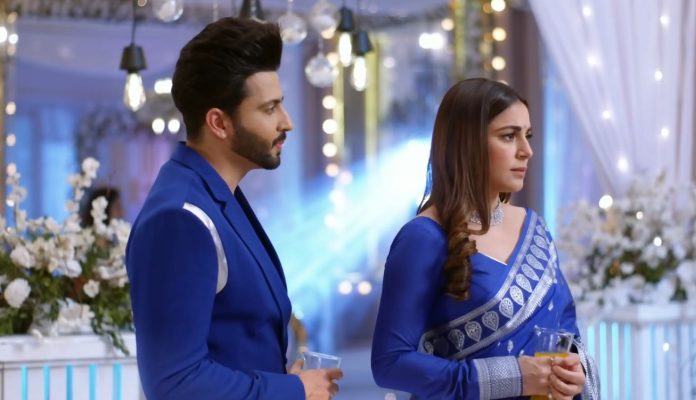 Kundali Bhagya 26th January 2022 Written Update Preeran is back Janki questions Sherlyn on seeing the latter leave from Prithvi’s room. Janki asks Sherlyn what was she doing in Prithvi’s room, what is going on between them. Sherlyn doesn’t answer her. Janki goes to alert Preeta again. She knows that Preeta has come to help the family. She asks Preeta who will help her if she gets stuck into any problem while helping others. Preeta asks her not to worry. She asks Janki why is she thinking such, as if someone has threatened her or told her anything wrong. Janki tells her about Sherlyn and Natasha’s misbehavior. Preeta thinks to tackle Sherlyn and her so called sister. Natasha awaits Preeta to come at the stage and hold the mic, that will leave Preeta electrocuted. She wishes Preeta dies and leaves from Karan’s life forever.

Sherlyn asks Prithvi will their plan work, will Preeta really get destroyed. He answers positively. He tells that their plan will definitely work, Preeta will be completely destroyed. Karan asks Preeta not to go too far from him. He tells that she shouldn’t make him away that he doesn’t come back to her. He adds that if he turns away for once, then he will never show his face to her. She gets worried hearing his words. Will Preeta understand Karan and patch up with him by ending their misunderstandings? Will they become Preeran again and fight their enemies together? Keep reading.

Earlier in the show, Prithvi and Naagre support Natasha. Prithvi calms down Sherlyn. He asks Sherlyn to let Natasha handle Preeta. Naagre wishes that Preeta really dies. Sherlyn takes Prithvi for a private talk. She asks him not to show tantrums to her. He tells that he will not tolerate her tantrums. She tells that she has done many crimes for his sake. He warns her not to anger her. She asks him not to vent his anger on her. He tells that she is also jealous, he hates the jealousy vibe.

She asks him not to dare compare her with a roadside dancer like Natasha. He calls her egoistic. He wants to see Preeta dead. She tells that he wanted revenge on Rishabh and she helped him, now Rishabh is out of sight, and Prithvi still wants revenge. He doesn’t reveal what he wants. She calls him a selfish man who kills people after fulfilling his motives. He angrily asks her did he kill her.

Sherlyn tells Prithvi that he can’t make her away, because he knows she is profitable for him. He tells that he is selfish, he throws out everybody from his life, he is tolerating her because he loves her, he isn’t scared of her. He tells that he has to destroy Preeta and remind her right status. He wants to snatch back his rights from Preeta. He tells that whoever will help him in this work of defeating Preeta, he will support that person, even if its Natasha. Janki overhears their conversation. He finds Janki outside. He tells Sherlyn that his first enemies are the Luthras. Sherlyn pretends on seeing Janki.

Janki worries for Preeta, who has come into the dangerous den to help out Luthras. She asks Preeta who will rescue her from the mess. Preeta asks her why is she sensing the danger. Janki tells that she is sensing danger because of Sherlyn and Prithvi, they are still together. She adds that even Kritika is against Preeta now, because Prithvi is her husband, Kritika may hate him but she will support him. Preeta understands it and feels its okay. She reminds that Kritika is emotionally stressed, she had been through broken relations, Kritika will obviously want to keep the marriage.

She feels Kritika has good values, she isn’t wrong, she shouldn’t regarded wrong. Janki finds Preeta so understanding. She tells that she is always with Preeta. Preeta goes and faces Karan. He wants to talk to her. She walks away. Rakhi finds Karan alone. He tells that he was seeing Preeta. She asks where is she. He tells that Preeta was just here, she left in a rush. He finds it tough to understand Preeta. He tells that he doesn’t know why Preeta came back, but he is glad with her return. She tells that Preeta has come back because she still loves Karan and the family, she didn’t come for money. She shares her opinion. She asks him not to fight with Preeta, who is already fighting Prithvi to protect them.

He tells that he is always with Preeta and against Prithvi. Rakhi hugs him. Kritika looks for Prithvi’s phone in his room. Prithvi meets her and shows the phone in his hand. She asks him why did he ask her to find the phone then. He replies that he wanted to talk to her, he was angry on her, but she wasn’t the reason, Preeta was the reason for his anger. He justifies himself that he wants to mend their relation. He reminds that she supported Preeta and got him arrested. He tells that Preeta used her cleverly and separated them. He asks Kritika not to be so innocent.

He tells that he knows her well and loves her, he was wrong to not explain or understand her, because of the anger filled within. He talks to her sweetly and appeals for making a new start. He requests her to forgive him for all the mistakes, then they can stay together as a couple. He promises to give her respect and rights of a wife, and love her like before. He wants her answer. He asks her if she will forgive him and give him another chance. Kritika gets unsure. He tells that she may not forgive him easily, but he will always love her. He assures that he won’t do anything against her.

Making a promise to her, he starts leaving. Kritika breaks down emotionally and stops him to hug. She hugs him and tells that she loves him a lot. He smiles and reciprocates her love. He tells that he loves her a lot. He thinks Kritika is his weapon, he will use Kritika against Preeta and then he will win the battle. He makes her promise that she will never support Preeta. She promises him. He goes to meet the MLA. He lies to them that he went to do social service, by leaving the important project event. He tells that he has a big heart, that’s why he can go to any extent to help his employees.

Reviewed Rating for Kundali Bhagya 26th January 2022 Written Update Preeran is back: 4/5 This rating is solely based on the opinion of the writer. You may post your own take on the show in the comment section below.