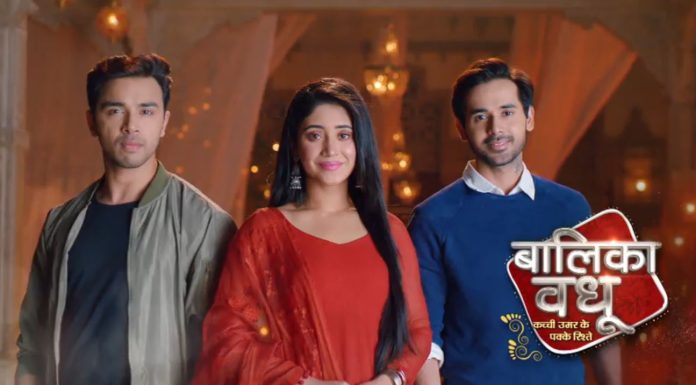 Anandi tells Anand that what he wants will never be fulfilled. She explains to Anand that she already went through an ugly wedding and can’t think of getting married again soon. Anand tells Anandi that she has already fulfilled her responsibilities towards Anjariya’s and doesn’t need to do it anymore. Anandi remains adamant on her decision to take care of Sejal. She asks Anand to live his life peacefully and fulfill his dreams, forgetting her. Anand tells Anandi that his one sided love will be enough for them. Anandi still stays adamant on her decision. She asks Anand to not let their friendship get defeated over his one sided love.

On the other hand, Bhairavi thinks she failed in her plan to kill Jigar and shut his mouth forever. She fears if Jigar would tell Anand his reality some. Bhairavi thinks that she has to send Anand to US away from Jigar and Anandi’s life anyhow. Mehul hears her words and scold her for trying to kill Jigar. Bhairavi says she can’t let Anand ever get to know that he is a rape child. Anandi takes promise from Anand to forget her and move on his life. Anand promises Anandi that he will focus on his career now. A sudden leap of 3 years is shown. Anandi is seen in a boutique. Employees of the boutique praised Anandi for her efforts. Anandi gives the female employees the credit for everything.

Sejal is seen feeding ill Jigar a sweet corn soup. Doctor comes to examine Jigar’s health. He praises Jigar’s health improvement. Sejal credits Anandi for the improvement in Jigar and her health. Doctor agrees to Sejal’s words and praises Anandi’s determination and kindness towards everyone. After sometime Bhairavi and Mehul are seen talking with Anandi in the boutique. Bhairavi tells Anandi that all their businesses are going into losses. She requests Anandi to collect as much as charity funds from her exhibition to recover the losses. Bahiravi further tells Anandi that they may lose everything if they fail to arrange the money they need to survive.

Sejal says she being illiterate wouldn’t have handled Premji’s business and Jigar alone. She tells the doctor that Anandi being honest and self respecting handled everything and everyone. Sejal also reveals that Anandi even became a partner with Bhairavi in their textile business. On the other hand, Mehul asks Bhairavi what is her plan. He asks Bhairvi why she let Jigar, Sejal and Anandi stay in their out house. Bhairavi tells Mehul that she wanted to keep her enemy Jigar in front of her eyes. She says that she has proof against Jigar and wants to shut his mouth forever if he regains his voice after getting well. Mehul asks Bhairavi what proof she has.

Anand returns from the US and hears their voice. He says that their house won’t get auctioned. Anand asks his parents to tell this man that they would throw his money on his face within three months. Anandi on the other hand is seen preparing for the exhibition. She will get some women’s calls and call her kaki. Anandi will tell the woman that she will do as she wants to. At Anand’s home, his parents tell him that they are very happy to see him back. Bhairavi asks Anand if he is sure of his plan to arrange money to pay the loan. Anand says he is sure. Bhairavi asks Anand if he is doing all this for Anandi. Anand tells Bhairvi that he has moved on from Anandi. He says that he mistook sympathy for love. Bhairavi and Anand seem tense.

Reviewed Rating for Balika Vadhu 26th January 2022 Written Update New Leap: 3/5 This rating is solely based on the opinion of the writer. You may post your own take on the show in the comment section below.