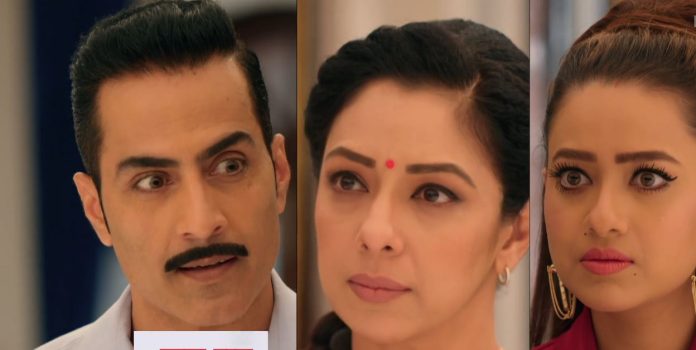 Anupama 27th January 2022 Written Update Vanraj confronts Anupama and Anuj are seen working hard in the office late at night. After some time, Anuj finds Anupama sleeping on the couch of his cabin. He covers her with his blazer and keeps staring at her. After some more time he also falls asleep. Anupama wakes up and sees Anuj’s blazer on her. She puts Anuj’s blazer on him to save him from the cold. Later Anuj wakes up and finds Anupama sleeping. He covers her back with his blazer. In her sleep, Anupama asks Anuj to let her sleep.

In his sleep only, Anuj asks her what he did. Sleeping Anupama requests Anuj to stop his snoring. Asleep, Anuj tells Anupama that she is snoring too and requests her to stop. Both of them continue asking each other to stop snoring in their sleep. Next morning, Malvika gets surprised to see Anupa and Anuj sleeping in the cabin. She finds them cute and she thinks to do something naughty. Malvika starts singing “Jaago Anu pyaari, Jaago Anuj pyaare”. Both Anupama and Anuj wake up as Malvika shouts and asks them to wake up. She wishes them Good morning.

Malvika tells them that she knew that they would have fallen asleep in the office only. She gives them the clothes and toothbrush she bought for them. Malvika asks them to go and freshen up. Both of them thank her. Malvika tells them that she didn’t have breakfast. She requests Anupama to make some sandwiches in the cafeteria for her. Malvika sarcastically tells Anupama that her hand made bread butter would too taste like pizza. Anuj requests Anupama to make tea too. Anpama agrees to do it and Anuj thanks her. Malvika says they would start work after breakfast.

She asks if Kavya reached office. Malvika goes to see if Vanraj has reached office. Anuj says it doesn’t look like his office as it’s scattered. Anupama says Pakhi’s room looks even cleaner than this. Anuj gets surprised to know. Anupama says she cleans Pakhi’s room. She changes the topic and asks Anuj if she was snoring in sleep last night. Anuj says no but later asks Anupama if she really snores in sleep. Anupama gets shy and stutters. She says she snores sometimes when she gets very tired. Anuj says he has a similar issue. Anupama tells Anuj that soon their restaurant will launch if they keep working like this. She also tells Anuj that she is happy and scared at the same time.

Anuj tells Anupama that it will happen better than they have thought about it as she is with him in this project. Anupama tells Anuj that he is with her. At Shah house, Baa gives Vanraj and Kavya their tiffin. Vanraj asks Paritosh to come to the office with him. Paritosh tells Vanraj that he would directly meet him in the office after finishing his meeting with the architect. Vanraj and Kavya leave for office together but with anger. Kinjal and Paritosh request Paritosh to handle Kavya and Vanraj’s anger. Paritosh says that only Anupama can handle them. Everyone feels worried at Shah house. Malvika, Anuj and Anupama are seen doing breakfast at the office.

Vanraj reaches the office and Malvika says she forgot about the meeting with Vanraj. Anupama offers sandwiches to Vanraj and tells him that she knows that he didn’t have breakfast. Vanraj asks Anupama if she can understand him this much, why can’t she understand whom he wants around him. Anupama tells Vanraj that she is not his babysitter to take the responsibility of who will enter and exit his life. She tells Vanraj that his mood and breakfast is his responsibility not hers. Anupama asks him to decide how he wants to fill his stomach with anger or with food. Kavya comes and Anuj wishes her good morning. Vanraj’s mood gets ruined.

Kavya tells Anupama that she needs her signatures on the papers given by HR. Both Vanraj and Kavya stare at each other. Vanraj tells Malvika that he is ready for her Mumbai restaurant launch plan. He tells Malvika that her Mumbai restaurant plan is better from the business point of view. Malvika says she just bounced the idea and asks Vanraj to let’s do it if he likes it. Vanraj and Malvika ask each other to make a decision. Anupama sees Kavya tense. She tells Malvika and Vanraj that they should make decisions together being equal partners in business. Anuj explains to Malvika that a fresher approach is also important with experience in business.

He asks Malvika to make a decision after thinking about everything. Malvika says she will think about it. Anupama suggests Malvika to first launch and complete the Ahmedabad project. Vanraj tells Anupama that Malvika doesn’t need a babysitter. He explains to Malvika that they should keep business and personal relationships separate. Malvika agrees saying that they are competitors after all. Kavya’s tension increases. Vanraj sarcastically praises Anupama’s handmade sandwich. Worried Anupama requests Malvika to make her decisions herself and again suggests her to launch her project in Ahmedabad first and then think ahead. Anuj says Anupama is right.

Malvika angrily tells Anuj that he always finds Anupama right. She also tells him that he has started supporting Anupama even before their marriage. Malvika’s words shocks everyone. She asks everyone to relax and let her and Vanraj make decisions about their project. Malvika finalizes to launch her project in Mumbai with Vanraj and leaves. Vanraj smirks and wishes Kavya all the best. He leaves giving an evil look to Anupama and Kavya. Anuj, Anupama and Kavya get worried. Kavya leaves worried. Anuj tells Anupama that he feels Malvika and Vanraj’s Mumbai project launch decision has some personal reasons behind it. Anuj leaves the meeting room.

Anupama thinks Anuj is understanding right as Vanraj is doing something else too with business. Malvika asks Vanraj to relax as they will surely do the Mumbai project. She asks Vanraj to tell her whom he is angry with. Vanraj tells Malvika that his fate always brings people in front of him, whom he doesn’t want to see. He tells Malvika that first he got to know that his business partner is Anuj’s sister, then had to share office with Anupama and at last Kavya too entered the same office. Vanraj tells Malvika that everyone is insisting him to give another chance to Kavya and his marriage, but he doesn’t want to.

He says if Kavya would have asked for divorce, everyone would have asked him to let her move on, fly and work ahead. Vanraj says that everyone believes that Anupama asked him for divorce, then it is a revolution, but when he asks for divorce from Kavya, everyone feels it is wrong. He calls everyone two faced. Vanraj further says that men also feel suffocated in a relationship. He says that now he has to tolerate Kavya both in office and at home. Malvika tells Vanraj that Kavya needed a job. Vanraj tells Malvika that Anuj could have given Kavya a job in another company of his. He further says Kavya could have handled the cafe he gave to her but she instead came to bother him in the office. Malvika tells Vanraj that he shouldn’t get bothered by Kavya as they are in two different projects.

Vanraj tells Malvika that his family is so nice, that they are letting Kavya still live in their house. He says Kavya shows herself as a helpless woman and his family a villain in front of the world. Vanraj tells Malvika that men don’t cry but also feel pain. Malvika gets lost into thinking. Vanraj smirks thinking that he manipulated Malvika. Malvika tells Vanraj that she can understand his pain. She explains to Vanraj that maybe Kavya didn’t do anything on purpose. She says sometimes things just happen. Vanraj says things happen with him too often.

Malvika asks Vanraj to focus on work, forgetting everything. She tells Vanraj that they will change offices after some days, if a problem arrives. Malvika tells Vanraj that Anupama explained to her that people should face their fear with courage. Vanraj feels irritated. Malvika asks Vanraj to not worry and face his fear with courage. Vanraj leaves and almost collides with Anupama and Kavya.

Reviewed Rating for Anupama 27th January 2022 Written Update Vanraj confronts: 5/5 This rating is solely based on the opinion of the writer. You may post your own take on the show in the comment section below.