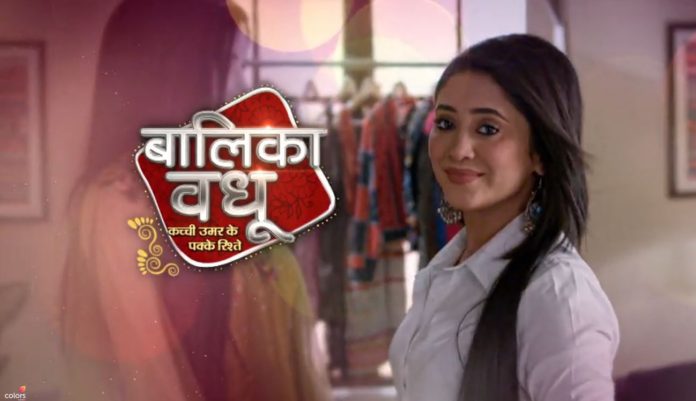 Mehul tells Bhairavi that he agrees with Anand’s idea. Bhairavi says to Mehul that she is okay with the plan if he and Anand are sure of it. She further says she called Anandi to discuss the event. A servant comes and says Anandi has arrived. Anand stops Bhairavi and goes to meet Anandi. Anandi is seen happily talking about her event/exhibition on call. She disconnects the call and turns. Anandi gets surprised to see that Anand has returned. She says hi to Anand but the latter shows ignorance to her. This shocks Anandi. She asks Anand what is this behavior.

Anand tells Anandi that it’s of no use as he is the 60% share boss. Anandi tells Anand that she is not an employee but 40% partner in the same company. Anand tells Anandi that she can leave the partnership if she doesn’t like his idea. Anandi leaves angrily. Next morning, Anandi is seen telling Sejal that Anand has become very arrogant now. She asks her to bring Jigar as she needs to take him for his appointment. Sejal brings Jigar and Anandi takes him with her. On the other hand, Anand is seen telling his and Anandi’s company’s employee that he is going to close the company. Everyone gets shocked hearing it.

Anand apologizes to them and asks them to search for another job as soon as possible. He leaves and all employees stand worried. Employees discuss with each other how and where they will find a new job. Anandi arrives there with Jigar in a wheelchair. She asks her employee the reason behind their tension. All employees tell Anandi about Anand’s decision to close the company. They ask Anandi how they will survive without a job. All employees also ask Anandi where they will get a new job within 10 days. Shocked, Anandi asks the employees to not. She says she will talk to Anand. Anandi goes to Anand. She questions him about his decision.

Angry Anand avoids Anandi. Anandi makes Anandi listen to her. She again questions Anandi about his decision. Anandi tells Anand that he is making many poor people unemployed. Anand tells Anandi that he is not snatching anyone’s job. He tells Anandi that he is just cost cutting in his company. He also calls Anandi talentless. Both Anandi and Anand continue arguing. Anand gets shocked to see Jigar in a wheelchair. He recalls Jigar’s accident due to his and Anandi’s push. Anand asks Anandi if she wants to save the company and everyone’s jobs, she has to get the client’s orders ready within 5 days. Hearing the amount of clothes to make, Anandi gets shocked. She tells Anand that it’s impossible to complete this order within 5 days.

Anand asks Anandi to agree with his decision then. Angry Anandi tells Anand that hsi order would get ready in 5 days. Anand asks Anandi to complete the order and throw it on his face. Anandi asks her employees to start working. She takes Jigar to the doctor. After some time, Anand secretly watches Anandi working hard for the company’s order and to save employees’ jobs. He comes to see Anandi’s work. Anandi by mistake throws color on Anand’s clothes. He shouts and asks her how he will go to meet his client like this. Anandi gives him a traditional looking designer blazer to Anand. Anand asks her how he can wear such a blazer in a client meeting. Anandi asks Anand to not show tantrums.

Bhairavi secretly sees Anandi and Anand’s chemistry in their argument. She gets scared thinking if they would fall for each other again. She decides that she won’t let this happen. Anandi receives a nurse’s call. Nurse tells Anandi that Jigar’s reports are showing great improvement in his brain. Anandi gets happy. On the other hand Sejal gets happy knowing. She asks Jigar to get well soon and reduce Anandi’s burden and responsibilities. She praises Anandi’s efforts towards everyone. Jigar moves his hand. Sejal notices it. She happily tells Anandi about it to Anandi. Anandi gets happy. After some time, Bhairavi is seen explaining to Anandi some work. Anandi agrees to use Bhairavi’s suggestions.

Bhairavi indirectly asks Anandi about Sejal and Jigar’s condition. Anandi tells Bhairavi that Jigar has moved his hand and is improving. She tells her that the doctor said that Jigar would soon start walking. Bhairavi gets shocked and scared. She pretends to be happy for Jigar in front of Anandi. Anand overhears Anandi and Bhairavi’s conversation. He feels bad seeing Anandi’s care towards Jigar. Ishana taps Anand’s shoulder and hugs him. Anand gets surprised to see her. He introduces Ishana to Bhairavi as his best friend from the US. Anandi feels bad when Anand tells Bhairavi that he didn’t feel the lack of any friend as Ishaana was with him every moment as his best friend.

In the next episode, Anandi’s employees will tell her that they haven’t worked on machine ever. They will ask her how they complete the order till next day this way. Anandi tells her employees that she would teach them. On the other hand, Bhairavi will ask Ishana to throw Anandi out of Anand’s life forever. Ishana will assure Bhairavi that Anand will soon start liking her as she likes him. She will also assure Bhairavi of ousting Anandi from Anand’s life forever. Ishana will be seen taking out a fuse from the electricity box and will smirk. Anandi’s workspace electricity will go off at the same time. Anandi will get worried about completing the order on time, without electricity.

Reviewed Rating for Balika Vadhu 27th January 2022 Written Update New start: 3/5 This rating is solely based on the opinion of the writer. You may post your own take on the show in the comment section below.