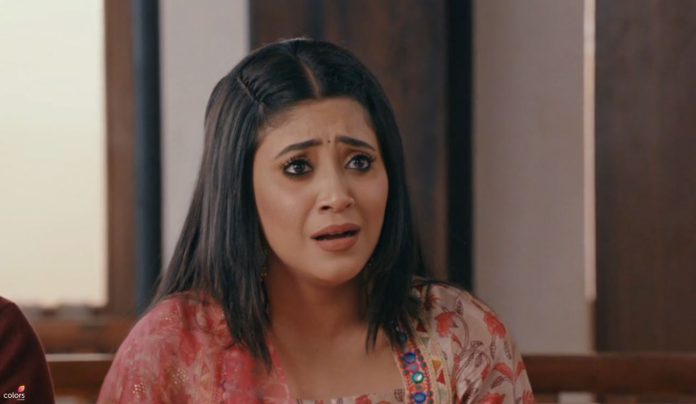 Balika Vadhu 28th January 2022 Written Update Anandi in trouble Anand introduces Ishana as his good friend. He tells Bhairavi that he didn’t feel the lack of any friend being with Ishana. Bhairavi asks Anand what Ishana does professionally. Anand tells Bhairavi that Ishana is an MBA and a gold medalist. Bhairavi feels impressed. She asks Anand to include Ishana in his business as she is an MBA. Anand asks Ishana if she would like to join his business. Ishana agrees to join Anand’s business. Bhairavi asks Anand and Ishana to be a team. Anandi feels a little bad hearing it. After some time, Anand and Ishana are seen talking to each other.

Anand asks Ishana to show her talent of being a gold medalist. Anandi enters Anand’s cabin and shows him some designs. Ishana questions Anandi’s behavior. She asks Anandi how she could enter her boss’s cabin without permission. Anandi gets angry. Anand feels shocked. She asks Ishana to behave. Ishana gets angry. Anandi tells Ishana that she is Anand’s childhood friend and she doesn’t know their connection. She further tells Ishana that she won’t even understand their friendship even if she sees their fights. Ishana gets shocked and asks Anand what is his opinion. Anand says Ishana is right. Ishana asks Anandi if she understood.

Anandi says she will call Anand “sir” if he agrees to it. She asks Anand if he would like her to call him “Sir”. Anand gets angry and asks them to focus on their work. Anandi asks Ishana if she understood. After some time, Ishana is seen talking to Bhairavi alone. She tells Bhairavi that she is irritated with Anandi. Ishana explains to Bhairavi about what happened between her, Anandi and Anand. Bhairavi tells Ishana that is why she wants to separate Anand and Anandi. She requests Ishana to make Anand fall in love with her. Ishana assures her of it. She tells Bhairavi that she fell for Anand in the three she spent with him in the Us.

Bhairavi asks Ishana to not let Anand know that they know each other from years ago. Ishana assures Bhairavi of it. Bhairavi further tells Ishana she, Mehul and her (Ishana’s) parents want to turn their business partnership into a personal partnership. She tells Ishana that she wants her to be her house’s daughter in law. Bhairavi also tells Ishana that she can’t force Anand to marry her as he won’t agree. She asks Ishana to anyhow make Anand fall for her and make Anandi away from him. Ishana tells Bhairavi that she will get Anandi out of Anand’s life anyhow. Anand asks Ishana what she and Bhairavi are talking about. Ishana lies to Anand in reply.

Anand tells Ishana that some couriers came on her name. Ishana says she ordered embroidery machines to speed up company work. She says this way with speed they will get exact designs too. Ishana further tells Bhairavi that she learnt all this from her college textile project. Bhairavi praises Ishana’s idea. She asks Anand to see what awesome ideas Ishana can give for the profit of their company. Bhairavi says Ishana thinks about their company so much. Anand agrees to Ishana’s idea. He tells about it to Anandi. Anandi refuses to make her employees work using machines. She tells Anand that hand work is their USP.

At night Anandi works hard and gets pricked by a pin. Sejal asks Anandi to not work so much. She also asks Anandi to eat something as she hasn’t eaten for a long time. Anandi asks Sejal if Jigar took his medicines. Sejal says no. Anandi leaves her work and food to give medicines to Jigar. After some time, Ishana is seen telling Anand and Anandi’s client that they can send their order two days early. Client agrees with her. Ishana smirks and thinks Anandi has so much trust in her hand work. She further thinks how will Anandi complete the order on time now. Next morning, Ishana informs Anand that the client wants their order till the next day as per their timeline.

Anand gets shocked and says it’s impossible. He tries to call the client and question him/her. Ishana stops Anand and asks him if he thinks that she didn’t try convincing the client. She says she tried a lot but the client didn’t agree. Ishana tells Anand that they will get into a huge loss if they fail to complete the order before. She further tells Anand that the client won’t get affected and will purchase his goods at retail price too from somewhere. Anand calls Anandi and tells her everything about the situation. In a bad tone, Ishana asks Anandi to use machines to complete work on time. She says that machines are better than humans and can replace them in future.

Anandi gets angry and asks Ishana to date a robot then. Ishana gets angry. Anandi says her employees’ hand work is better than machine work and nobody can compete or replace them. Anand convinces Anandi to use machines. Anandi’s employees tell her that they never worked on machines. They also ask her how they will work using machines in a very short time, having no knowledge of it. Anandi asks them to not worry. She assures them of teaching them using machines quickly. Suddenly the electricity goes off. While Anand, Anandi and employees get worried. Ishana smirks standing outside the electricity board.

Anandi gets worried thinking how they will complete the order on time now. She asks her employees to start hand work till electricity comes back. Anandi and her employees work hard all night. Next morning, Anandi cheers her tired employees by giving them food. Her employees refuse to have and tell her that they would work first. Anandi feels proud and emotional seeing her employees’ determination towards work. She brings some snacks for them to have while working. A woman gets dizzy, Anandi and Anand help her. Anandi feels that old Anand is still alive. She wishes that Anand gets back to his normal good behavior soon. Ishana feels irritated seeing everything.

Anand and Anandi ask Ishana if electricity came back. Ishana says that she is told that electricity would return in an hour. Anand and Anandi feel relaxed knowing it. Ishana thinks now she will have to join the wires again to not get caught. She feels irritated thinking that now Anandi will finally complete the order.

In the next episode, Anandi would be seen drunk and dancing. Anand would be seen handling her. He will ask her what happened to her. In a drunken voice, Anandi will tell Anand that she is dancing with her old best friend. Ishana will smirk seeing Anandi drunk. She will think that now Anand will get upset with Anandi and will never see her face for not completing the order on time. Ishana will feel proud of herself for spiking Anandi’s drink.

Reviewed Rating for Balika Vadhu 28th January 2022 Written Update Anandi in trouble: 3/5 This rating is solely based on the opinion of the writer. You may post your own take on the show in the comment section below.