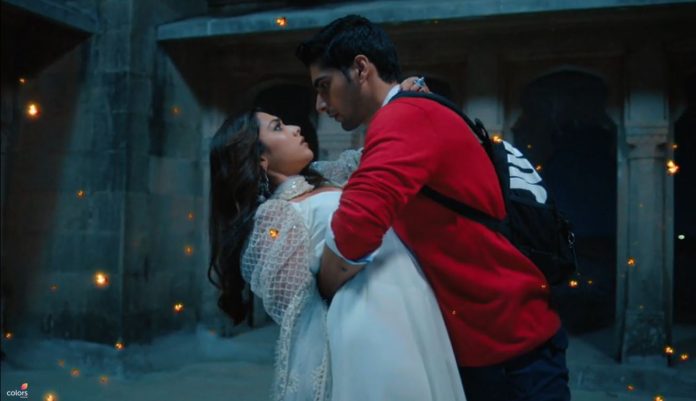 Fanaa 1st February 2022 Written Update Ishaan’s entry Pakhi tells Tanya that she is thankful to God that Rajeev got saved. She says that she couldn’t sleep the whole night in tension. Pakhi asks Tanya if she got to know how Rajeev fell down. Tanya tells Pakhi that she just got to know that police would interrogate Rajeev after his surgery. She says after that they would get to know what happened. A green teddy bear kept in Pakhi’s room is seen keeping a watch on her. Tanya asks Pakhi to not take tension. Pakhi throws a dress on the green teddy bear.

Tanya asks Pakhi to come for a movie with her after showing the venue to the client. She tells Pakhi that she would feel good after watching Sidharth Malhotra’s movie. Pakhi tells Tanya that she can’t watch today. She reminds Tanya that she has to pick up Agastya from the airport. Pakhi tells Tanya that she would wear Indian today as Agastya likes her in it. She says she would also wear payal to irritate Agastya. Both Tanya and Pakhi disconnect the call. Pakhi goes to check her room door on hearing a voice. A girl wishes her Happy Family Day with a camera recording Pakhi. Pakhi asks the girl in which country Happy Family Day comes. The girl says Nigeria.

Pakhi asks the girl why they are celebrating this. The girl tells Pakhi that they need to do something for funny content. She further tells Pakhi she thought of going to live with her “Silly Srivastava’s” this family day. The girl says she thought it as a content for her followers. This girl is introduced as Pakhi’s sister. Pakhi makes fun of her sister’s followers and work. Pakhi’s sister tells her that she is sure that Kylie Jenner’s sister wouldn’t have made fun of her sister when she has 2000 followers. Pakhi tells her sister (Shanaya) that it’s her favorite pastime to make fun of her. Both sisters fight with each other cutely.

Shanaya goes outside and continues her vlog recording. She records Pakhi helping their father solve a newspaper crossword puzzle. Shanya announces her father with his name “Sameer”. Then she introduces her and Pakhi’s mother who rules on their father. Their mother asks Shanaya to become like Pakhi instead of being busy inside her mobile the whole day. After this, Shanaya introduces her cousin Mohit as a coding genius. She shocks Mohit by revealing his secret of having a crush on two girls. Mohit tells Shanya that shooting without permission is a crime. He asks her to buzz off. Later, Shanaya’s paternal uncle Anup Srivastava introduces himself on her live vlog.

Shanaya feels embarrassed and angry when Anup starts giving his whole educational qualifications on her live vlog. She asks him if he thinks he would get a job by giving his whole bio-data in her live vlog. Pakhi tells Shanya that her followers can’t give jobs to anyone as they will be free and unemployed like her. Anup supports Pakhi. Shanya asks Pakhi to stop embarrassing her as she is on live. Pakhi says sorry and leaves aside. Shanya then introduces her paternal aunt. She tells her followers that today is her paternal aunt’s fast. Sweets fall from Pakhi’s paternal aunt’s hands. Shanya ends her live session. Pakhi’s paternal aunt makes an excuse saying that she was hiding sweets from Anup as he eats it secretly even after his sugar is high.

Anup asks his wife why she is making excuses using his name. Pakhi saves her paternal aunt. She informs her mother that she will be late as she has to pick up Agastya from the airport in the evening. Shanya teases Pakhi. Pakhi asks Shanaya to understand that she and Agastya are best friends, not girlfriend-boyfriend. On the other hand, Agastya recalls Pakhi, seeing her images, sitting in his private jet. He smiles remembering Pakhi.

Pakhi says to her clients that she hopes they liked the wedding venue she showed. Pakhi’s client apologizes for troubling her at the last moment. They tell her that their first date was a horror movie. The couple tells Pakhi that they wish to get married in a haunted haveli. Tanya apologizes to the client saying that they can’t change the venue at the last minute and also says that there is no haveli nearby too.

Pakhi tells her clients that she would arrange a haveli. Tanya takes Pakhi aside to talk. Pakhi asks Tanya to not worry as she has a princess college friend, “Mandira Singh”. She further says that Mandira has a “hira kothi” and she would arrange it by talking to Mandira. Pakhi takes her client to show them her friend’s kothi. Tanya messages someone in tension. Hoodie man follows Pakhi in his car. Pakhi reaches the venue. While entering the venue one of her evil eye accessories falls down. Clients praise the venue’s (palace’s) beauty. Pakhi asks the caretaker if no one comes into this palace. Caretaker says that no one comes into this palace after the princess’s painful death happened here.

Pakhi asks what happened with the princess here. Caretaker tells Pakhi that King Manvendra forcefully brought Princess Manorama here from Kartarpur. He further tells that Princess Manorama never agreed to marry King Manvendra and died suffering in the dungeon. Pakhi says Kings would have got punished if Mee Too would have been in old times. Caretaker says every full moon night the princess’s voice is heard. Someone scared Tanya from behind. This boy teases Tanya. Tanya gets some pictures clicked by this boy. Pakhi says that they should visit this palace on full moon night. Caretaker says it’s full moon night today. Caretaker asks everyone to leave quickly as he has to close the palace before evening.

Pakhi assures her clients that their marriage would be arranged in this palace only. Her clients thank her. Pakhi searches for Tanya. She finds Tanya and tells her that the client has finalized this palace. Pakhi sends Tanya outside with her bag. She says she would return after clicking two-three pictures. Tanya, Photographer and Pakhi’s clients leave unaware of the fact that Pakhi is still inside the palace. Hoodie man follows Pakhi’s staff and clients car. Caretaker also locks the palace unaware of the fact that Pakhi is still inside. Pakhi thinks that the decorations of the palace would take a lot of effort. Caretaker runs away locking the main gate too. Pakhi is seen coming downstairs.

She gets scared on knowing that everyone left her in the palace. Pakhi shouts for help. She continues to scream for help. Pakhi gets restless seeing that it’s getting dark and her phone is too with Tanya. Pakhi’s mother questions Tanya about Pakhi’s whereabouts. Tanya says she thought Pakhi sat in another car. Pakhi’s father decides to go to the airport in search of Pakhi. On the other hand, Pakhi recalls the palace’s horror story narrated by the caretaker. She tries to calm herself by telling herself that the universe will surely send someone to help her. Someone enters the palace. Pakhi gets scared hearing a sound and seeing a shadow. Ishaan tells his friend on call that he will win the bet and will fulfill his fantasy of spending a romantic night with a female ghost.

He also jokes about getting a curse from the female ghost and becoming a werewolf on every full moon night. Ishaan thinks why is this female ghost not coming in front of him. He suddenly hears payal sound from Pakhi’s feet. Ishaan’s call gets disconnected and he follows the payal sound. Pakhi feels scared and tries to find her way to escape the palace. Ishaan tries to make himself believe that ghosts don’t exist and it’s just his adrenaline release. Pakhi requests the universe to help her get out of the palace. Ishaan asks the ghost to come in front of him and fight him. On the other hand, Agastya smiles, recalling Pakhi’s kiddish requests from him in the past. Pakhi and Ishaan keep wandering in the palace. Agastya types a shayari (poetry) for Pakhi in his laptop.

At the palace, Pakhi and Ishaan reach the terrace following each other’s voices. They get scared after colliding with each other. Pakhi falls in Ishaan’s arms and the moonlight shines on them. They get lost in each other’s arms and a lot of fireflies surround them. Agastya also sees the moon from his jet window. His written shayari is heard in the background. Pakhi and Ishaan separate from each other. They angrily ask who they are. Pakhi asks Ishaan how he entered the palace. Ishaan says he jumped the wall to enter the palace. Pakhi calls Ishaan a thief. Hoodie man enters the main gate of the palace. Pakhi threatens Ishaan to not underestimate her seeing her size. She tells Ishaan that she can get him arrested for entering her friend’s palace like a thief.

Ishaan asks Pakhi who she is calling a thief. Pakhi fights Ishaan, misunderstanding him to be a thief. Ishaan grabs Pakhi and closes her mouth. He tells Pakhi that he is Dr. Ishaan. Ishaan further tells Pakhi that he came to stay the night in this palace to win the bet he made to his friends. Pakhi doesn’t believe Ishaan’s words. Ishaan shows Pakhi his identity card. Pakhi reads that Ishaan is a Pediatric Oncologist. Ishaan asks Pakhi why everyone gets emotional reading his id card. He says he tries to be happy himself to bring smiles on ill children suffering from cancer. Pakhi smiles hearing Ishaan’s good thinking. Ishaan asks Pakhi why she came to this palace. Pakhi tells Ishaan her reason for being locked inside the palace.

Ishaan laughs and questions Pakhi who gives her bag with phone to their assistant. He calls Pakhi stupid. Pakhi snatches Ishaan’s phone to call Agastya. Agastya reaches the airport. Pakhi doesn’t find the network on Ishaan’s phone. Ishaan runs behind Pakhi to get his phone back. Hoodie man picks up Pakhi’s fallen accessory. Ishaan runs and follows Pakhi’s scream. A Driver tells Agastya that grandmother called again. Agastya sends the driver outside saying that he will come soon. He wonders where Pakhi got stuck as she never gets late. Ishaan mistakenly breaks a lamp in search of Pakhi. Agastya gets worried for Pakhi. Ishaan sits on a box. The box moves and scares Ishaan. Ishaan asks who is inside. Agastya hopes Pakhi is fine and decides to find out what happened.

Reviewed Rating for Fanaa 1st February 2022 Written Update Ishaan’s entry: 4/5 This rating is solely based on the opinion of the writer. You may post your own take on the show in the comment section below.