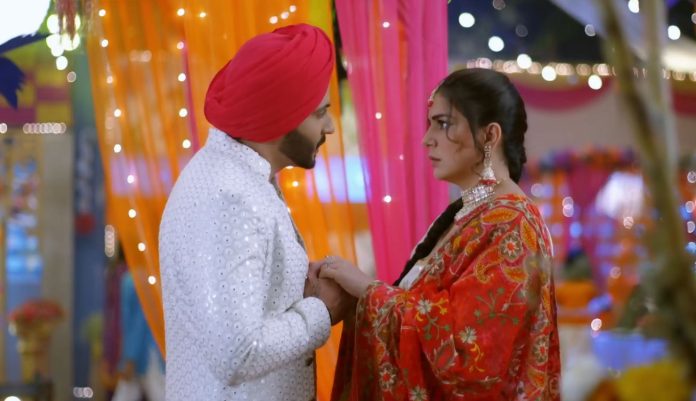 Kundali Bhagya 2nd February 2022 Written Update Preeran love Natasha tells Sherlyn that Karan wants her to help him and go close to him to make Preeta jealous. She adds that he thinks Preeta will come close to him, but Preeta will go away from him. Karan goes to Preeta and compliments her. He tells her what he feels. He tells that her eyes speaks a lot, her actions speaks louder than words. He asks her to just miss him and he will come in front of her in the same moment. Preeta tries to keep Karan away from her.

Furthermore, Natasha makes a plan to separate Karan and Preeta. She tells that she will create many misunderstandings between Karan and Preeta, that Preeta’s jealousy will soon change into suspicion. She tells that once faith breaks down in a relation, then the relation doesn’t stay the same after the partners suspect each other. Prithvi meets the goon and likes the coconut bomb. He is impressed with the goon’s talents. Keep reading.

Earlier in the show, Prithvi meets a goon and asks for something unique. He asks him if he can make it and deliver it to him. Goon asks him how can he make the air bomb, that affects just one person. Prithvi wants a bomb fit inside the coconut, nobody should figure out about it.

Luthras welcome the guests in the Lohri party. Karan arrives there in the traditional Punjabi avatar. He gets mesmerized seeing Preeta. He goes to his dear wife to compliment her Punjabi look. He falls in love with Preeta once again. He thinks to hide and play with her. Preeta looks for him. He loves her a lot. Natasha collides with him. He tells that their plan is successful, Preeta is very jealous to see them together. He tells that Preeta has worn red and white colour clothes as he told her. Natasha tells that she didn’t had the same combination clothes. He tells that he told everything for Preeta, who really got jealous. They see Preeta staring at them with anger.

Karan finds her leaving. He tells Natasha that he will just see Preeta and come. Natasha wants him to chant her name soon. Rakhi brings Mahesh in the function. Everyone wishes Mahesh happy Lohri. Karan asks Mahesh how does he look. Mahesh sits quiet. Rakhi tells that Mahesh is feeling uncomfortable, but thankfully he is back home from the basement. Mahesh just remembers Preeta. He gets emotional when he sees Preeta there. Preeta runs to meet him. Mahesh wishes her happy Lohri. The family is glad to see him speaking normally.

Prithvi asks him not to anger him. The goon promises to make the bomb soon and hand it over to him. He asks Prithvi to just delay the puja as much as possible. Prithvi tells that he wants the coconut bomb on the same day. He calms down himself. He thinks to use Kritika and delay the puja. The goon comes across Preeta, who wishes him happy Lohri. He recognizes her as Prithvi’s target and goes away. She thinks why did the guest leave so soon. Karan comes back to compliment Preeta’s looks and beauty. She asks him if he is flirting with her. She tells that she doesn’t like his flirt, she hates him flirting with anyone.

He knows that she wants him to flirt with her. She asks him not to talk of romance, because the situation has changed, she is more successful than her, she is the great Preeta Luthra, now she is the hero of their story. He tells that she can make excuses, but she likes him to flirt with her. He asks her to confess the truth, her eyes just wants to see him, her ears just wants to hear his voice, she wants to be with him. She denies it. He asks her to say it that she loves him. He tells that action speaks louder than words, whenever she wants to see him, she can just think of him, he will come in front of her. He asks her to make a heart gesture for him.

He doesn’t mind if she wants to stare at him. Preeta gets tensed to answer him. He hides from her and teases her. She thinks to answer Karan back. She finds Karan with Natasha again. She goes. Natasha hugs Karan and he makes her away. She asks him does he feel anything by her touch. She tells that he should behave like boys, not like shy girls. She tells him that she knows he loves Preeta, but she is just helping him in making Preeta jealous. He asks her to continue her work. She tells that she is also mad about him, her entry got late, now only Preeta has a right on him. He agrees.

She asks him if things would be different if she came in his life before Preeta. He tells that its impossible, he can’t imagine it. He goes away to avoid her flirting. She tells that she will soon come in his imagination. Preeta wonders who is Natasha that she is staying in their house. She thinks to oust Natasha. Shrishti and Janki meet Preeta in the Lohri celebrations. Shrishti tells that she loves Preeta a lot. Preeta tells that she also loves him a lot. The sisters are selfless. Janki tells that she is selfish and demands their love. They have a laugh.

Shrishti asks about Mahesh. Preeta tells her that Mahesh is normal, he identified everyone for a while. She narrates the emotional moments. She cries. She tells that she sees her dad in Mahesh. Janki asks her to just stay happy today. Prithvi keeps an eye on Preeta. Kritika asks him what is he doing. He tells that he is seeing everyone happy, its like the old days.

He feels everything changed since Mahesh gave him the business duties, everyone misunderstands him but he loves the family a lot. She hugs him with love. Kritika tells Natasha that Prithvi and her patchup has happened. Natasha calls it a good news. Prithvi doesn’t want Natasha to spill beans on his plans.

Reviewed Rating for Kundali Bhagya 2nd February 2022 Written Update Preeran love: 4/5 This rating is solely based on the opinion of the writer. You may post your own take on the show in the comment section below.