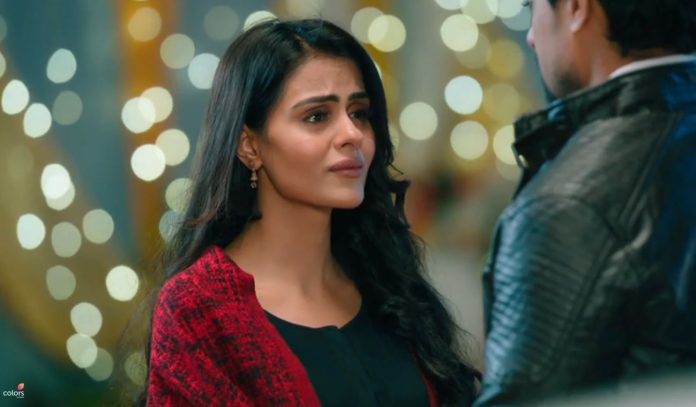 Udaariyaan 2nd February 2022 Written Update Final goodbye Fateh meets Tejo outside his house. The lovers hold hands and shed tears. He tells her that they may never meet from now, because he is getting married to Jasmin tomorrow, he will become of Jasmin. He tells that he might never see her again. He realizes that he is in a big trouble and also helpless. They part ways when he bids her an emotional good bye. Tejo cries for him. Jasmin finds them sharing a moment.

She calls up Tejo and asks her to do attend her wedding at any cost. She tells that Tejo has to come in the wedding to witness the drama. She adds that Tejo has to witness how the fate of Virk family changes. Fateh and Tejo get away and cry. Jasmin keeps a watch on them. Tejo hopes Angad finds a way to stop Jasmin’s evil from winning. What twists will come in their marriage? Keep reading.

Earlier in the show, the entire family performs dance united for Jasmin and bless her. Fateh leaves from the house in anger. Amrik calls him. Fateh tells Amrik that he is going to meet Tejo, who is the only person to control his anger. Jasmin asks Satti to get Tejo in her marriage. Sandhus get disheartened and leave. Angad drops Tejo home. He tells Tejo that they will find some way to deal with Jasmin and save Fateh. He adds that he will not let Jasmin win the game. He asks her to keep smiling and be strong. Fateh finds Tejo with Angad. He gets upset and leaves without meeting her. He recalls their incomplete love story and cries.

Fateh meets Buzo who asks him if Fateh has decided about marrying Jasmin. Fateh tells that he is helpless. Buzo jokes on his courage and fate that he is marrying for the third time. He also pities Fateh. He asks Fateh to find some way to save himself. Fateh tells that he is trying hard, but there is no way. Buzo asks about Tejo, whom he loves dearly. Fateh cries for Tejo. Satti and Rupy come to see Tejo. They don’t want to tell her about Jasmin’s invite.

Satti finds Tejo in much pain already. Tejo cries in Fateh’s memory. Fateh thinks Tejo is better when she is away from him. He wants Angad to do good for her. He tells that Angad might give her what she deserves. He tells that he always left Tejo alone and didn’t do anything for her love. He regrets that his fate separated him with Tejo again. He doesn’t want to see Jasmin’s face again. Jasmin asks Simran and Mahi to do her makeup and make her ready. She gets them at her service. Nimmo calls Jasmin a Naagin. Gurpreet tells that its good for them if Jasmin stays calm. Jasmin angers Mahi again. Fateh tells that he can’t see his family living in fear. He sheds tears. Buzo consoles him. Fateh tells that this would have not happened if he didn’t leave Tejo. He regrets a lot for his mistakes.

Tejo asks Satti where had she been. Satti doesn’t hide anything from her. She tells her about Jasmin’s demands. She also adds how Jasmin has troubled the Virks and insulted them. She fears that Virks will go mad because of Jasmin’s tortures. Tejo tells that they shouldn’t get scared of Jasmin. Satti tells that Jasmin is making them agree by using Amrik. She pities Amrik and Fateh. She tells that Fateh’s life will be ruined. Tejo wants to talk to Fateh once. She knows what he is going through. Khushbeer gets emotional that he lost his house to Jasmin.

He asks Gurpreet will she tolerate this and make him tolerate. She doesn’t want her sons to go to jail. He asks why didn’t she trust him, he would have saved Fateh if he took Amrik’s blame on him. He tells that he also loves his children a lot, he can do anything for Fateh. He asks why did she give up to Jasmin. He tells that she is destructing the family by being blind in love. She tells that she is ready to cry all life to ensure safety of her children. Fateh arrives home. He gets surprised seeing Tejo. He asks her how did she come at this time.

He adds that she would have something good in her fate, someone who deserves her and loves her a lot. He tells her with painful eyes that he will be of Jasmin from tomorrow, so he won’t be able to meet Tejo from now. Tejo cries hearing him. Jasmin calls Tejo to taunt her for coming home at this time to meet her lover. Jasmin tells that Tejo has defeated all the lovers. She asks Tejo to come to attend Fateh and her marriage. She threatens about Amrik. Jasmin wants to change their fate. She feels at peace. The Virks prepare for the marriage.

Mahi curses Jasmin. Gurpreet asks Mahi and Simran to accept the situation. Mahi wants to keep hope. Gurpreet tells that Tejo shouldn’t come, she will be in pain to see her love marrying someone else. Simran tells that Tejo will really come because she can’t leave them alone in troubles. Sandhus are worried that Tejo isn’t at home. Rupy gets frustrated when Bebe asks him to perform Kanyadaan of Jasmin. He can’t bless Jasmin knowing that she is marrying to ruin the Virks. He breaks down. The family supports him. Rupy asks Navraj not to let Tejo come to Virk house.

Khushbeer and Gurpreet have an emotional talk before Fateh’s destructive marriage. She apologizes to him that she didn’t care for him. She tells that she is his wife first and respects him a lot, and then she is a mother of her children. He hugs her and reciprocates her love. She tells that they will tolerate Jasmin for the sake of their children. Fateh is upset. Buzo suggests that they get Jasmin kidnapped and demand her to give the evidence against Amrik. Fateh knows that Buzo wants to help him some way, but he can’t commit a crime to hide another one. Buzo wishes that a miracle happens and Fateh gets his love. Tejo visits the Gurudwara and prays for Fateh.

Reviewed Rating for Udaariyaan 2nd February 2022 Written Update Final goodbye: 3/5 This rating is solely based on the opinion of the writer. You may post your own take on the show in the comment section below.