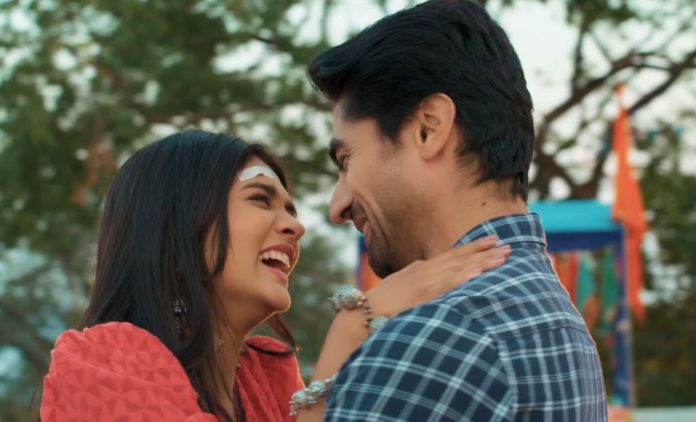 Manish angrily stops Akshara and orders her to go inside. Akshara tells Manish that she has to go and help a kid who has his chemotherapy session today. Manish doesn’t allow her. Akshara shows Manish a video call of the scared kid and his mother and requests him to let her go. She tells him that it doesn’t matter to her where she works but wants to go and help the kid. Manish gets convinced and allows Akshara. Everyone sees Aarohi too leaving with Akshara. Manish and Akhilesh stop Aarohi and Akshara and ask them to submit the resignation letter in Birla hospital, while returning. This makes Akshara and Aarohi worried.

At Birla hospital, Harshavardhan assures Anand and Mahima that he would organize a steamy and sustained PR campaign to make people forget what happened between Birlas and Goenkas. Mahima and Anand support Harshvardhan in this PR related matter. They get shocked seeing Aarohi and Akshara in the hospital. Harshvardhan says what drama Akshara and Aarohi will create now. He follows them. Abhimanyu smiles seeing Akshara cheering up the kid suffering from cancer with her music therapy. He sees his phone ringing and thinks about who is calling him again and again. Ignoring the call, he keeps staring at Akshara. He thinks how can anyone not fall in love with Akshara.

Mahima asks Aarohi to get out of her cabin. This shocks Aarohi. Mahima asks Aarohi to talk to Harshvardhan and says that she doesn’t want her in her team anymore. Aarohi asks Mahima why she is punishing her for Akshara’s faults. Mahima tells Aarohi that she doesn’t mix personal matters into professional matters. She calls Aarohi a fraud and tells her that she doesn’t want liers in her team. Mahima leaves for an important surgery. Aarohi feels humiliated and angry. Akshara comes out of the kids ward and recalls Manish’s words. Abhimanyu takes her aside. Akshara shows Abhimanyu her resignation letter. Abhimanyu tells Akshara that he won’t let her resign. He reminds her that she loves her work a lot.

Abhimanyu tells Akshara that he knows everything about. Akshara asks Abhimanyu how he got to know. Abhimanyu says it’s not important. Akshara asks Abhimanyu if he felt bad that she didn’t tell him this. Abhimanyu says no he didn’t feel bad as he understands that everyone has a past. He explains to Akshara that everything would get fine as their love is pure and intentions are right. Harshvardhan hears their conversation secretly. Abhimanyu receives Anisha’s call and runs away hearing her call for help. Akshara gets left confused. Harshavardhan also gets confused seeing Abhimanyu running away in tension.

On the other hand, worried Abhimanyu reaches a house. He gets more worried seeing Anisha with her wrist cut. Akshara reaches home and tells her family that she resigned from Birla hospital. She asks her family to inform Manish about this and also to tell him that “his Akshu” loves him very much. Akhilesh says that now they would have to see that Aarohi doesn’t cause trouble to Manish. On the other hand, Manish is seen with his car broken. He tries to get a lift but the boy angers him saying that his girlfriend is waiting and leaves. Abhimanyu stops in front of Manish. At Goenka Mansion, Akshara recalls Manish and Harshvardhan’s words while playing guitar.

Akshara sees Naira’s dairy. Kairav thinks that only Naira’s dairy can give Akshara some peace. Akshara reads Naira’s diary and cries, hugging it tightly. On the other hand, Abhimanyu offers Manish his help to drop him home. Manish avoids Abhimanyu. Abhimanyu thinks about how to convince Manish.

In the next episode, Abhimanyu will be seen asking Anisha about her hand wound. He will also tell Anisha that he would reach and meet her at 2 PM. Aarohi will get shocked and confused hearing caring words for another girl from Abhimanyu. She will call Akshara to meet her. Aarohi will tell Akshara that she heard Abhimanyu talking to another girl in a caring way. Akshara would seem to not take Aarohi’s words seriously. Anisha will tell Abhimanyu that she will die if anything messes up now. She will hug Abhimanyu telling him that she has no one except him. Akshara will be seen passing from nearby them.

Reviewed Rating for Fanaa 1st February 2022 Written Update Ishaan’s entry: 4/5 This rating is solely based on the opinion of the writer. You may post your own take on the show in the comment section below.