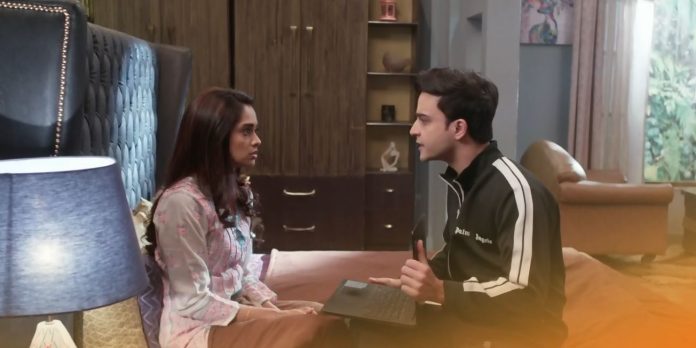 Kumkum Bhagya 4th February 2022 Written Update Ranbir confronts Prachi Vikram advises Ranbir to be a caring and protective husband. He regrets a lot that he couldn’t advice his son right in the hour of need, and just saw Ranbir’s life getting ruined because of Rhea’s madness. He tells that Prachi loves Ranbir and deserves to be with him. Vikram now supports Prachi. He wants Prachi and Ranbir to sort out their differences and reconcile. Vikram encourages Ranbir to talk to Prachi and try to find out some way that can lessen her anger and hatred. Ranbir goes to speak to Prachi at night. He finds her sleeping. He goes towards the drawer.

She wakes up and holds his hand in tension, thinking he has come to check her medical file. Ranbir gets into a hearty talk with Prachi, and tries hard to know what is she hiding. Prachi doesn’t reveal anything to him. Later, Ranbir and Prachi are seen sleeping close, while he rests his head on her lap and falls asleep. Pallavi is shocked to see Ranbir with Prachi in her room. She doesn’t want Rhea to see them. She is also confused seeing Ranbir’s inclination towards Prachi again. Moreover, Ranbir gets Prachi’s medicines. He gets a doubt about her pregnancy, and wants to know about it at any cost.

He searches about the medicines usage on the internet and finds out that its taken by women during pregnancy. He confronts Prachi when he wakes up. He tells her that the medicines are useful for baby’s growth, if any girl takes the medicines, then it means that she is pregnant. He asks her to just tell him if she is pregnant. Ranbir confronts Prachi with a proof this time, and leaves her speechless. He threatens of never forgiving her if she dares to hide the news which he deserves to know. Will Prachi admit her pregnancy truth this time? Keep reading.

Earlier in the show, Ranbir goes to scare Vikram. They sit for a talk. Ranbir asks him not to drink, else Pallavi will get angry. Vikram tells him about marriage, a wife becomes the best friend after some years. Ranbir tells that Pallavi will scold him. Vikram tells that he isn’t scared of Pallavi, who is just worried for his health. He knows that if he drinks in front of everyone, then Pallavi will get upset, he doesn’t want to upset her, he loves her and cares for her. He tells that Ranbir can’t understand this husband and wife’s mutual understanding. Ranbir asks what does he mean. Vikram feels sorry that he isn’t able to call himself a good dad for Ranbir.

He tells that they/Pallavi and him gave Ranbir all the happiness, but they did wrong when Ranbir got his happiness home in the form of Prachi, they didn’t accept Ranbir and Prachi’s love and disowned Ranbir. He apologizes. Ranbir asks him to have a drink and forget everything. He also gets drunk. He asks Vikram how does he drink such whiskey. They don’t want Pallavi to catch them drinking. They share more drinks and laugh. Ranbir tells that his head is spinning, he should go to sleep now. Vikram also tells the same to him. Vikram gets his help to go to the room. He gets confused about his room. Ranbir tells that he doesn’t know his room too. Ranbir tells that he loves his dad a lot. Vikram goes to his room saying he also loves his son. Ranbir mistakenly reaches Prachi’s room. He sees Prachi sleeping. He calls her a cute fairy.

He doesn’t want her to wake up. He sits watching Prachi. He loves her a lot. He wants the moment to stop for him, so that he lives it well being lost in her love. He wishes their love gets revived, and they stay happy like before. He feels the same love for her. He thinks to kiss her. He stops himself since she is sleeping and he shouldn’t take an advantage of her. He wants to kiss her when she is in her senses, so that she feels his love. He admits that he really loves her a lot. He asks her to not hate him, if she can’t love him. He tells that she just fights with him. He sits talking to her. He tells that he had some drinks with Vikram, Pallavi knows about Vikram’s drinking habit and doesn’t stop him. He asks Prachi to tell him once that she loves him, then he will never drink ever. He thinks to get a medicine for his headache.

He goes to take the medicines and pulls the drawer. Prachi wakes up and stops him. Ranbir falls asleep in her lap. She feels love for him. She doesn’t make him aside and tries to sleep. Aaliya doesn’t feel sleepy. She goes to the kitchen to get a water bottle. She tells that Prachi will again try to find a way to make Rhea cry. She passes by Prachi’s room, and sees Prachi and Ranbir sleeping together. She doesn’t know how they are together after their big fight. She calls Pallavi and asks her to come out for an important talk. Pallavi asks her what is so important. Aaliya tells that she has to show her something. She calls her at Prachi’s room. Pallavi tells that everything is calm. Aaliya makes her see Ranbir with Prachi. Pallavi is shocked. She calls it impossible. Aaliya tells that Ranbir is sleeping with Prachi.

Pallavi tells that it’s the limit of shame, she can’t see this. Aaliya tells that they have to separate Prachi and Ranbir. Pallavi calls it tough. Aaliya asks her to bring Ranbir close to Rhea, so that Prachi intervenes between their relation. Pallavi tells that she can do this at least. Aaliya asks her plan of action. Pallavi tells that she will talk to both Ranbir and Rhea in the morning. Prachi wakes up in the morning and doesn’t see Ranbir with her in the bed. She gets shocked seeing him sitting on the sofa and staring at her in anger. She asks him what is he doing in her room. He asks her not to get up from the bed and have tea. He tells that they won’t get such chance again. She refuses to have tea. He asks why is she refusing. He wants to know why is she such rude. She asks why did he drink.

He tells that he got drunk to open up his senses, so that his eyes can see what’s hidden from him, so that he can feel the thing that she doesn’t want to tell him. She worriedly checks the drawer keys. He asks her did she hide the keys. He takes the keys from her hand. He tells that she locked the drawer for a purpose. She asks him what is he saying. She commands him to leave her room. Ranbir confronts her about the medicines. She doesn’t want to answer him. He tells that he knew she won’t answer him, so he found all the answers himself. He shows her the information on the laptop screen. He tells that the medicines are taken by a pregnant girl. He angrily rebukes her. Prachi gets into a huge argument with Ranbir. She reminds that he tagged her character before and would suspect her to be carrying Siddharth’s child. Ranbir gets raged at her. What will happen next? Keep reading.

Reviewed Rating for Kumkum Bhagya 4th February 2022 Written Update Ranbir confronts Prachi: 3/5 This rating is solely based on the opinion of the writer. You may post your own take on the show in the comment section below.