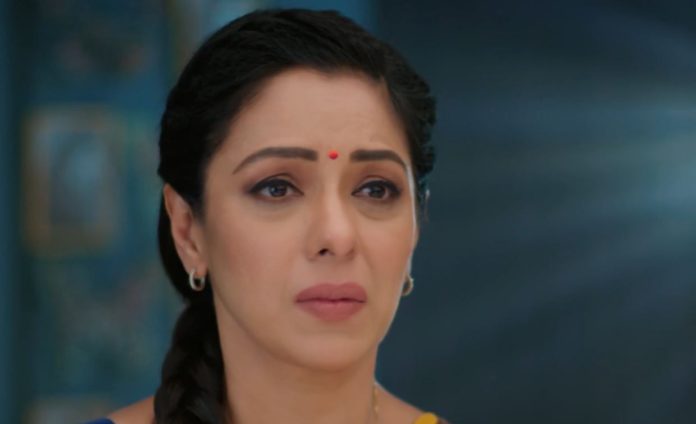 Anupama 7th February 2022 Written Update Anupama warns Malvika Anupama tells Anuj that his decision doesn’t seem right. Anuj says he made the right decision. He tells Anupama that he took this decision by thinking and fighting with himself a lot and can’t fight himself anymore. Anupama tells Anuj that she has energy and won’t let him do wrong. Anuj tells Anuj that everything happened, his heart broke and anything that happened can’t be changed. He asks Anupama if she will support him in his new journey. Vanraj tries to stop Malvika from changing Anuj’s decision.

Malvika tells Vanraj that she doesn’t want to listen to anything. She says that she can’t let Anuj take such a mad decision. Vanraj again tries to manipulate Malvika by telling her that the truth is that Anuj left her, but not Anupama. He tells Malvika that Anupama and Anuj’s small time relationship overshadowed her and Anuj’s years of brother-sister relationship. Vanraj tells Malvika that Anuj can’t see anything/anyone over Anupama. On the other hand, Anupama refuses to support Anuj’s decision. She tells him that he is the most right person in the world but made the wrong decision. Anupama tells Anuj that she will bear his anger and become bad in his eyes but won’t support him in his wrong decision.

At Shah house, Shah’s worry about Vanraj, Anuj, Anupama and Malvika. Baa says to Paritosh that he should have gone to office with Vanraj. Paritosh replies that nobody understands that business works with practicality, not emotions. Samar tells Paritosh that there is a difference between being selfish and practical. Kavya says what will happen to her job, if Anuj breaks his partnership with Anupama for Malvika. Tense, Kavya prays to God to save Anuj and Anupama’s partnership. She says instead Vanraj and Malvika’s partnership should break. At the office, Vanraj tells Malvika that Anuj and Anupama are trying to pretend greatness. He also tells Malvika that it’s Anuj’s plan as he knows that she would return everything to him, like she did on christmas eve.

Vanraj continues manipulating Malvika by telling her that Anuj and Anupama became great in the world’s eyes by pretending to sacrifice by making her evil. He tells Malvika that the world would think that a sister snatched everything from her step brother. Vanraj smatly tries to make Malvika believe that it’s Anupama making Anuj dance on her tunes. On the other hand, Anupama asks Anuj how he can leave Malvika alone with an evil person like Vanraj. Anuj tells Anupama that he already tried to control Malvika’s life two times and ruined it badly. He says he doesn’t want to repeat his mistake. Anuj asks Anupama what other option he has instead of trusting Malvika this time.

Anupama tells Anuj that he trusts Malvika, that she would always do the right thing. She says in a similar way she trusts Vanraj that he would always do the wrong thing. Anupama says that she forgot that Vanraj could never walk the right path and gave him a second chance. She requests Anuj to change his decision. Anuj says that he can’t change his decision or make her understand himself. Anupama reminds Anuj that Vanraj Shah was wrong for her and Kavya but is very wrong for Malvika. She tells Anuj that he is running away instead of helping and protecting his sister. Anupama says Vanraj isn’t interested in Malvika but in her business and wealth. Anuj says he knows it very well.

Anupama tells Anuj that Vanraj is enjoying by bringing a rift between him and Malvika, who gave him another chance in life. She also tells Anuj that one day Malvika would get to know about Vanraj’s reality, but it may get late till then. Anupama asks Anuj to not leave his rights on Malvika. She requests Anuj to not leave an innocent Malvika with an evil Vanraj. Anuj refuses to change his decision and make Malvika understand. Anupama gets angry and tells Anuj to remember that she isn’t part of his decision. She apologizes to Anuj for not being able to support his decision. On the other hand, Vanraj continues provoking Malvika against Anupama and Anuj by saying that they don’t see potential in her. He asks Malvika to make a decision if she wants to prove herself to Anuj and Anupama or not.

Malvika says Anuj gave her everything. Vanraj tells Malvika that Anuj didn’t give her everything but returned. Malvika asks Vanraj how will Anuj survive now. Vanraj tells Malvika that Anuj can survive like she did for years. He tells Malvika that she chose to leave, giving everything to Anuj but Anuj’s choice is Anupama, not her. Vanraj provokes Malvika by telling her that Anuj’s priority is Anupama, not her. He takes Malvika’s hand in his hand and tells her that he won’t leave her support ever like Anuj. Anupama asks Anuj to name his everything to Malvika but not leave Malvika alone. She asks Anuj to be a part of Malvika’s life. Anupama reminds Anuj that he always stood for her and now she would always support him.

Anupama tells Anuj that Malvika doesn’t know Vanraj’s reality. She says they should make Malvika aware of the truth. Anupama tells Anuj that she would fight for him if he doesn’t. She tells Anuj that all his sadness and fights are hers now as they are one. Anuj feels overwhelmed with Anupama’s fighting spirit and affinity for him. Anupama makes Anuj sit and gives him his medicine. She also makes Anuj eat something and clean his mouth with her saree. Anuj stops Anupama by grabbing her saree but she leaves his cabin in anger. Vanraj is seen trying to manipulate Malvika into doing something wrong. Anupama reaches Malvika’s cabin and her expressions shock and scare Vanraj.

Vanraj shouts at Anupama to get out. Malvika asks Vanraj to go out for sometime. Anupama asks Vanraj to close the door while going out. Vanraj feels scared seeing Anupama’s angry expressions. He fears Anupama of ruining his evil game plan. In the next episode, Malvika will request Anupama to go and will say that she doesn’t want to hear anything from her. Anupama will tell Malvika that she would have to hear her as it’s about her friend Anuj. Vanraj will tell Anuj that fate gave an orphan like him a royal life but he left it. Anupama will ask Malvika to run the business on her own, not with anyone else’s support. She will warn Malvika by telling her that one who is supporting her today can make her fall and snatch her everything in future.

Reviewed Rating for Anupama 7th February 2022 Written Update Anupama warns Malvika: 5/5 This rating is solely based on the opinion of the writer. You may post your own take on the show in the comment section below.