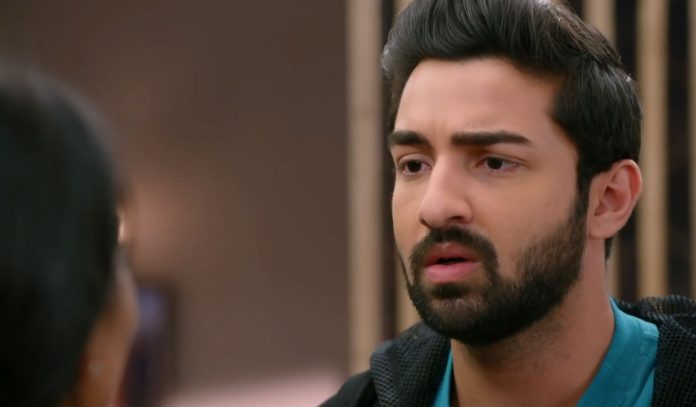 Bhagya Lakshmi 8th February 2022 Written Update Defensive Rishi Malishka turns Kalyani against Lakshmi. She tells that Lakshmi has stolen the necklace and its proved now, when Lakshmi is caught red-handed with the necklace lying inside her bag. She tells that Lakshmi liked the necklace a lot. She reminds Kalyani of their conversation. Kalyani had heard Lakshmi saying she likes the bridal necklace. Lakshmi tells that she had told so on Malishka’s pestering for the choice. She defends herself, but Kalyani doesn’t believe her.

Lakshmi gets worried when Malishka calls the police there. Rishi is locked up inside the washroom. He realizes that Malishka has planned something against Lakshmi and wants to rush there. He gets locked up in the same moment when Lakshmi needs him the most. Lakshmi tells the Inspector that Kalyani thinks she has stolen the necklace, it was found in her bag, but she didn’t steal it. Malishka asks Lakshmi is she has kept it to frame Lakshmi. Rishi reaches there in time and tells that he had kept the necklace in Lakshmi’s bag.

Lakshmi and Malishka can’t believe it, knowing he is innocent. Lakshmi asks Rishi why is he lying. He trusts him. Malishka asks Rishi to stop lying, he didn’t keep the necklace. Rishi asks Malishka did she keep the necklace if he didn’t. Malishka gets tensed. Malishka asks Lakshmi about her feelings for Rishi. She asks what does Lakshmi want, is she wants Rishi. Lakshmi asks her to change the question, she should ask if she still loves Rishi or not. She tells that she has an answer for this question. Malishka wishes that Lakshmi doesn’t love Rishi now. Lakshmi’s answer gets awaited. What will be Lakshmi’s answer? Keep reading.

Lakshmi tells Kalyani that she didn’t come to the locker room since the morning. Malishka accuses her for trying to break Rishi and her relation. Rishi tries to break open the door. He gets free of the locked washroom and runs to the staffroom to see Lakshmi. Malishka blames Lakshmi, who denies it. Lakshmi tells that she isn’t greedy for money. Malishka asks what was her motive. She tells that Lakshmi wanted to break Rishi and her marriage. Kalyani calls the police on Malishka’s command. She tells that they will be losing their store name because of her. Lakshmi tells that she didn’t do anything wrong. Kalyani tells that they got the proof against her now. She apologizes to Malishka.

She tells that Darshan helps everyone, he pitied Lakshmi and kept her in the store. Lakshmi tells that she isn’t helpless, she didn’t cry in front of anyone to get a job, her character is still strong. Malishka asks Lakshmi to stop her attitude. Lakshmi tells that she will not accept the crime she didn’t commit. Kalyani asks her to go with the police. She drags Lakshmi with her. Rishi looks for Lakshmi. Malishka and Kalyani complain about Lakshmi. Rishi steps in to protect Lakshmi and takes the blame on himself. He instigates Malishka to make her confess. He apologizes to the Inspector. He tells that he didn’t tell Malishka about it. Kalyani asks Rishi why did he do such a thing.

He asks her to first apologize to Lakshmi. He tells that its wrong that they were humiliating Lakshmi. Lakshmi thinks why is Rishi doing this to save her. Rishi asks Lakshmi why is she thinking that he is doing this to save her. He answers the Inspector. He tells that he didn’t know this drama will come up, he had kept the necklace in Lakshmi’s bag to gift it to her as a gift. Lakshmi takes him with her for a talk. Malishka asks Lakshmi where is she taking Rishi. Rishi asks Malishka to relax. Lakshmi tells that Rishi didn’t keep the necklace in the bag, she knows him, and wants to defend herself also that she didn’t steal the necklace. He shows faith on her. He knows that she didn’t steal it. He tells that his heart knows it well that she can never do this. He proves Lakshmi innocent.

He tells Malishka that Lakshmi liked that necklace, she would have never accepted it if he gifted it to her directly. Kalyani asks why would be gift the costly necklace to Lakshmi. Rishi tells that Lakshmi is his duty, she has saved his life and lost a necklace in the fire. Kalyani apologizes to the police. Rishi rebukes her for insulting Lakshmi. He asks Kalyani to say sorry to Lakshmi. Kalyani tells that the staff can’t steal anything. He takes a stand for Lakshmi. He makes Kalyani apologize to Lakshmi. Lakshmi returns the necklace to Malishka. She refuses to accept the gift. She goes away and cries. Malishka goes after her to confront. She asks Lakshmi is she loves Rishi or not. Lakshmi tells that some questions don’t have a simple answer. She tells that she doesn’t love Rishi now.

She advises Malishka to ask Rishi about it. Malishka asks what will she do if Rishi loves her. Lakshmi cries. Karishma awaits Malishka’s call. She hopes the plan works. Sonia asks her to call Malishka and ask her. She trusts Malishka. Lakshmi tells Malishka that she doesn’t have a place for Rishi in her heart, she lost faith in love, Rishi never loved her, it was all a lie. Rishi hears them. Lakshmi asks Malishka to take care of Rishi, who is habitual to break marriage. Malishka asks her to stop her nonsense. Lakshmi wants to know why did Rishi save her, Rishi didn’t keep the necklace in her bag, he helped her, but she doesn’t want him back. She asks Malishka to keep Rishi. Malishka gets angered on her.

Reviewed Rating for Bhagya Lakshmi 8th February 2022 Written Update Defensive Rishi: 4/5 This rating is solely based on the opinion of the writer. You may post your own take on the show in the comment section below.