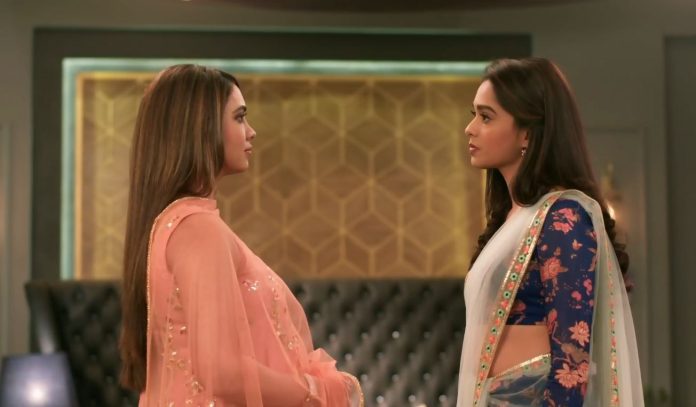 Kumkum Bhagya 9th February 2022 Written Update New challenge Prachi finds Rhea preparing for her romantic night with Ranbir. Her slipper sole breaks. She stumbles and sits outside Rhea’s room to fix it. Ranbir watches her and goes to meet Rhea. Rhea tells Ranbir that she is really happy, she loves him a lot. Ranbir tells that he can’t keep himself away from her for long. He sees Prachi there and intentionally romances Rhea to show her. He tells that he knows Rhea loves him, she has a right on him, he should have given her this right much before, she really deserves it, he has to give her happiness. Rhea feels it like a dream. He tells that their dream will get true now.

Rhea is happy that their relation is going to form now. She confesses her love for him. Prachi overhears their conversation, and gets much upset. Prachi goes to challenge Rhea. Rhea tells that Ranbir wants to go on honeymoon with her, its his wish. Prachi tells Rhea that she will not let Rhea spend the night with Ranbir and make it her first night. She challenges Rhea that she will stop her from spending a moment of peace with Ranbir, Rhea will never get Ranbir.

Rhea gets aback by Prachi’s words. She was in her happy zone that she is going on a honeymoon with Ranbir, she loved his surprise, which was too unexpected for her. She feels her happiness is going to suffer because of Prachi. She tells Prachi that this time she won’t let her come between Ranbir and her. She tells Prachi that Ranbir told her, that he wants to give her the deserved rights of a wife to her and give her happiness of a complete relationship. She doesn’t want Prachi to break her dreams this time. She can’t let Prachi come between her marriage when its becoming strong because of Ranbir and her mutual feelings. Will Prachi regret and fix what she spoilt? Keep reading.

Ranbir tells Rhea about his third dream which is not fulfilled till now. He asks her if she won’t like to hear his two dreams. She tells that its no use to know it if its already fulfilled. She asks his third dream. He tells that his third dream is fatherhood. She calls it sweet. She promises that she will help him in fulfilling his third dream, its her dream now. He hugs her just to show Prachi. He thanks Rhea. He asks Rhea to take care of herself. She tells him that they have to leave in the morning. She can’t believe it that Ranbir wants to have a child with her. She feels her wish turned true, and very soon she will be carrying his child, then Prachi has to leave the house forever. Prachi goes away to cry, recalling his words.

Shahana asks why is she crying now after making Ranbir away. Prachi tells that she had scolded him in anger to make him away, thinking she will not get affected, but she still got affected by him, she feels hurt when he is hurt. She tells her feelings about Ranbir, that she always wants to be with him, she felt the same peace as before when he slept in her lap, when he questioned her pregnancy, she lied to him and made fun of his dreams, she broke his heart by her harsh words, she lied so much, she wanted to have a family with him, it was her dream also to have a baby, but she didn’t wish this to happen. She felt that he will be hurt and stay away from her, but she didn’t imagine that he will go to Rhea.

She wants to tell him the truth that she is carrying his child, his biggest joy. She doesn’t have courage to tell him. She remembers the bitter past. She can’t believe what Ranbir has done with him. She tells that she can’t forgive Ranbir, she isn’t able to stop him from going to Rhea, she can’t tell him the truth, she wants to give him the happiness and fulfill his dream, but she can’t break her own dream of her child’s good future, she can’t risk her baby’s future. Shahana asks her to stop Ranbir by keeping the truth hidden. She advises Prachi to apologize to him. Prachi doesn’t think she can stop him. She tells that she has stopped fighting with fate. Prachi goes to her room and finds Rhea resting on her bed. Rhea reminds that Prachi occupied the room before and now its her turn. Prachi tells that she isn’t shocked, Rhea always copies her, because she doesn’t know to do anything else. Rhea tells that its Ranbir’s room, it doesn’t belong to Prachi.

Rhea tells that she will not let Prachi snatch her husband. She warns Prachi to stay away and not eye Ranbir again. She tells that Prachi already fell in his eyes, she should stop her drama now. She reminds his words that Ranbir cares for his wife, he didn’t want Prachi to blame her. Prachi blames Rhea for dropping the fire wood on her foot. Rhea asks her to do anything she wants, but spare her husband. Prachi asks Rhea to know that she has snatched her husband. She calls Rhea shameless. She asks Rhea why did she eye Ranbir when she was married to Siddharth. She reprimands Rhea for her evil moves. Rhea tells that she stooped low just to bow high, Ranbir now belongs to her.

Prachi asks her why is she scared then, when Ranbir is of her. She calls Rhea insecure. Rhea tells that she isn’t scared, she is just warning her. She asks Prachi not to accompany them on the honeymoon, Ranbir wants to unite with her and have their baby. She doesn’t want Prachi to spoil her honeymoon. She asks Prachi to keep the room and limit herself. She wants to live with Ranbir and his love. Prachi tells that its not love. Rhea tells that she loves him since a long time. Prachi tells that she isn’t interested in knowing anything. Rhea frustrates Prachi, by talking about her first night with Ranbir.

She shocks Prachi saying very soon Prachi will get the good news of Ranbir and her child, they will be becoming parents soon. She taunts that Prachi can’t copy her now. She makes Prachi angered. She asks her to leave the house before they return, else Pallavi will throw her out soon. Prachi tells that she has no interest in Ranbir. Rhea jokes on her. She tells that Prachi has no talent to become someone’s wife, she will do whatever Pragya has taught her. Prachi asks her to limit her nonsense. She warns Rhea against saying a word against Pragya. She feels Rhea has turned crazy in her joy, Ranbir and her night won’t be special. She swears that she won’t let Rhea have her first night with Ranbir. Rhea asks her to try it and lose. Prachi challenges Rhea. Rhea tells that she will be her slave if she loses.

Prachi wants to see Rhea’s upset face. Rhea accepts her challenge. She tells that Ranbir will father her child soon. Prachi doesn’t think this would happen. Pallavi and Aaliya are happy for Rhea. They both love Rhea, and want Rhea to stay happy with Ranbir. Pallavi tells that she invited her friends for the tea party. Aaliya feels Rhea will be happy now. Pallavi tells that Ranbir was drunk and fell asleep in Prachi’s lap, the reality is that he is with Rhea, he has seen Prachi’s real colours and will forget her. Aaliya tells that Ranbir will give her a grandchild soon. They await the good news. Rhea tells that Prachi will not have any support from anyone. She tells that Pallavi also doesn’t regard Prachi her bahu.

Reviewed Rating for Kumkum Bhagya 9th February 2022 Written Update New challenge: 3/5 This rating is solely based on the opinion of the writer. You may post your own take on the show in the comment section below.