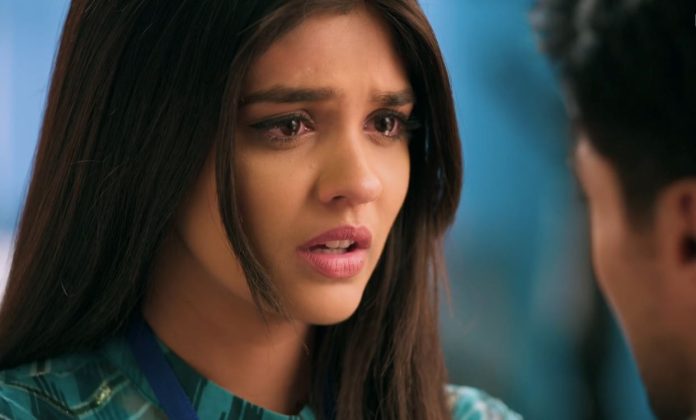 Abhimanyu replies no. Manjiri tells Abhimanyu that she just wanted to remind him that his patients are waiting for him in the hospital. Kairav’s call can be seen on Abhimanyu’s phone, but the latter doesn’t hear it due to a mixer sound in his house. Tense, Kairav sees Akshara and Swarna taking care of Anisha. Akshara and Swarna give turmeric pumpkin soup to Anisha to relieve her foot pain. Anisha thanks Akshara and goes to use the washroom. Suhasini and Swarna explain to Akshara that helping others is good but bringing strangers home isn’t good. They tell Akshara that they feel something off and awkward.

Akshara tells Suhasini and Swarna that she thought the same initially but then thought of helping Anisha properly. She asks them to not worry as the Lord never let anything bad happen to good people. Kairav gets angry on colliding with Anisha. He asks Anisha what she is doing at his house and takes her aside. Abhimanyu gets worried after seeing a lot of missed calls from Kairav. At the same time, he receives Akshara’s call and wonders if Akshara would be angry as he has unintentionally ignored her since morning. Seeing Akshara quiet for sometime, Abhimanyu asks if she is angry. Akshara tells Abhimanyu that she isn’t angry.

She moves forward where Kairav and Anisha are talking to each other. Anisha tells Kairav that she was forced to come. Kairav reminds Anisha that she met Abhimanyu. Anisha asks Kairav who she will meet other than Abhimanyu as no one else is as much closer to her as Abhimanyu. Irritated Kairav asks Anisha why she came to Goenka Mansion with Akshara. Anisha tells Kairav that she can go anywhere to get what is hers. She asks who will stop her. Anisha says, she will get what is hers. Unaware Akshara falls while moving forward. Kairav and Anisha get alert. Abhimanyu gets worried and asks Akshara if she is fine. Akshara says she is fine and just fell a little.

Abhimanyu tells Akshara that he will be fine till she is fine. He further tells Akshara that he won’t ever feel any problem till she is with him. Akshara tells Abhimanyu that she is always with him. Abhimanyu calls Akshara “chakka” of his cycle who won’t let him fall ever. He gets shocked to see Anisha at Goenka Mansion in the video call. Akshara turns back and sees Anisha and Kairav together. She disconnects Abhimanyu’s call. Abhimanyu wonders what Anisha is doing at Goenka Mansion. He worries about whether Anisha would tell anything to Akshara. Akshara removes her earphones and questions Anisha. Anisha apologizes and makes an excuse of losing her track. Anisha goes away to receive Abhimanyu’s call.

Abhimanyu asks Anisha to leave Goenka Mansion. Anisha tells Abhimanyu that she came to see Goenka Mansion’s environment as he was not helping her properly. Abhimanyu tells Anisha that she doesn’t have any idea what will happen in Goenka house, if anyone gets to know anything there. He asks Anisha to leave the Goenka house. Anisha tells Abhimanyu that he has started getting scared. She says everyone will get to know the truth someday, so it’s better that the truth comes out today. Abhimanyu asks Anisha if she has lost her mind. He stops himself in between telling Anisha that she returned at a crucial time of Birla and Goenkas life. He asks Anisha to let him handle everything. Ansiha gets convinced with Abhimanyu’s words. She asks Abhimanyu to do something as soon as possible as she isn’t able to keep much patience. Abhimanyu feels angry and irritated after disconnecting the call.

Akshara introduces Anisha and Manish to each other. Anisha thanks everyone for taking care of her. She leaves Goenka Mansion making an excuse. Kairav relaxes a little with Anisha’s exit. Suhasini advises Akshara to be careful while befriending and helping others, as she can get cheated too. Kairav feels tense. Manish informs the family that he got an invitation from the community on Vasant Panchami. Suhasini and Swarna ask children from family to go and enjoy as it’s an auspicious festival. Vansh gets happy and thinks of it as an opportunity for his video vlogging. Kairav texts Abhimanyu to meet him next morning. Aarohi and Anisha have a hit and miss, outside Goenka Mansion.

Harshvardhan asks Manjiri if she talked to Abhimanyu. Manjiri says no. Before Harshvardhan can get angry, Abhimanyu’s voice scares him. Abhimanyu asks Harshvardhan to not trouble his mother to convince him for his benefits. He further asks Harshvardhan to leave as Manjiri has a lot of work to do. Harshvardhan leaves towards his room. Abhimanyu receives Kairav’s text to meet him and he replies ok. Next morning, Suhasini explains to her family the importance of the “Vasant Panchami” festival and pooja. Akshara sings the prayer for pooja and the family starts pooja. Everyone one by one performs the pooja.

Akshara gives puja offerings to everyone. She gets happy when Manish accepts the offering from her. At Birla house, Abhimanyu’s decision to go to hospital makes Manjiri and Parth happy. Akshara and Abhimanyu send their smiling photographs to each other. Akshara calls Abhimanyu cute. She also wards off the evil eye from his photograph and kisses it. Akshara texts Abhimanyu to meet her as she wants to pray for his stethoscope like she did for her guitar. Abhimanyu recalls that he has to meet Kairav and texts Akshara that he has some work to do first and would tell her after getting free. Akshara texts Abhimanyu to meet her first and then complete his work. Abhimanyu texts Akshara that he would call her. Akshara finds Abhimanyu’s behavior weird.

Abhimanyu makes a plan with his siblings to meet them for Vasant Panchami celebrations and processions after his work. At Goenka Mansion, Aarohi tries to manipulate Akshara against Abhimanyu. She provokes Akshara by telling her that Abhimanyu should trust her and not hide anything from her, like she does. Akshara tells Aarohi that she would manage her and Abhimanyu’s relationship herself. Aarohi leaves asking Akshara to deal with her matter herself. Akshara gets confused.

Reviewed Rating for Yeh Rishta 8th February 2022 Written Update Major twist: 5/5 This rating is solely based on the opinion of the writer. You may post your own take on the show in the comment section below.