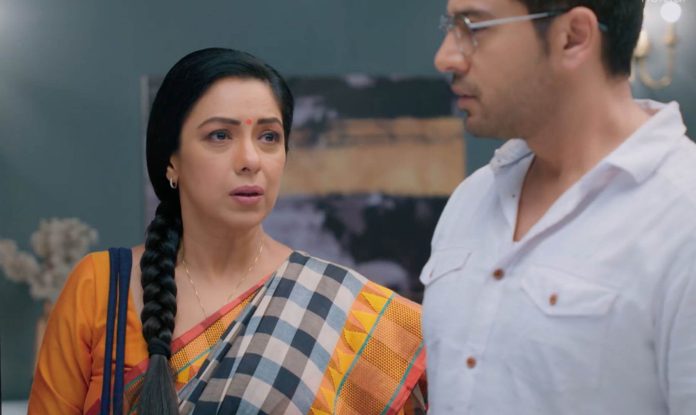 Anupama 9th February 2022 Written Update Anupama vows love Anuj tells Vanraj that he was rich when he had his family, all relations and especially Anupama with him. He also tells Vanraj that he won’t be able to become rich by breaking all his relations for money. Vanraj tells Anuj that his thoughts are good to make his heart happy. Anuj tells Vanraj that a person becomes rich by being a decent person, not with money. Vanraj tells Anuj that by his thinking his father (Bapuji) should have the most rich person in this world. He says he has seen his decent Bapuji standing in ration lines for hours.

Vanraj further says that seeing all this he learnt that to get respect in this life a person needs to be wealthy. Anuj tells Vanraj that he lost his integrity for earning wealth. Vanraj tells Anuj that he has his integrity with himself as he didn’t do anything to create differences between him and Malvika. He says to Anuj that Anupama is responsible for differences between him and Malvika. Anuj asks Vanraj to not bring Anupama in between. Vanraj asks Anuj, what would he do if he doesn’t stop. Anuj tells Vanraj that he returned his keepsake, but would fight for relations as they actually belong to him.

Anuj threatens Vanraj that he would show him his real power, if he tries to hurt Anupama and Malvika. Vanraj asks Anuj why he would fear him, when he didn’t get scared by “The Anuj Kapadia”. Anuj tells Vanraj that “The Anuj Kapadia” had many things to lose but when a person doesn’t have anything to lose, he thinks after taking any step. Vanraj smiles evilly. At Shah house, Paritosh informs Shahs that from office, he got to know that all four, Anuj, Anupama, Malvika and Vanarj are together now. Everyone fears a big argument between the above four. Kavya fears that Anuj and Vanraj may break each other’s head in anger. Samar says he is sure that Anupama would handle everything.

Pakhi asks how will Anupama alone handle everyone. Bapuji says now the argument will worsen. At the office, Anuj enters Malvika’s cabin. Vanraj tries to reach and talk to Malvika first. Anupama stops Vanraj. Vanraj asks her who she is to speak in between. Anupama asks Vanraj who he is to talk between a brother and sister. “Ek Hazaaron Mein Meri Behna Hai” plays in the background. Anuj walks to Malvika and takes her with him. Vanraj gets scared. Anupama and Vanraj follow Anuj and Malvika. Anuj brings Malvika to his cabin and makes her sign Kapadia empire papers. Malvika signs the papers with tears in her eyes.

Saying all this Anuj looks angrily at Vanraj. He asks Malvika to never get scared and never come in anyone’s words. Anuj advises Malvika to hear everyone but do what her heart will allow her to. He tells Malvika that he can leave everything but can’t stop worrying about her, being her brother. Malvika stands up and hugs Anuj tightly. She asks Anuj if he can leave her, but not Anupama. Anuj tells Malvika that one day she will understand everything herself. In a low voice, Vanraj tells Anupama that she and Anuj became beggars. He asks her what type of beggar bowl she and Anuj need. Angry Anupama tells Vanraj that a beggar is one who asks for things, but Anuj has given everything by holding his head high. She also tells Vanraj that higher the person flies, the harder he falls down.

Vanraj continuously insults Anuj but Anupama gives him a befitting reply in support of Anuj. Anuj and Malvika dance on “Mukabla”. They cry in their trials to be happy. Anuj hugs Malvika. Shahs worry by not being able to talk to anyone from Vanarj, Anupama, Anuj and Malvika. At office, Anuj wards off the evil sight from Malvika. He tells Malvika that from today her every problem will be his’s and his every prayer would be hers. Anuj also tells Malvika that everything is hers but wants to take the magnet with her permission. He removes his name plate and places Malvika’s CEO nameplate instead. Anuj kisses Malvika’s forehead and says, “All the best” to her.

Anupama apologizes to Malvika for scolding her and asks her to always be happy. She asks Malvika to never think that they are going away from her. Anupama also asks Malvika to come to meet her if she wishes to someday. She also requests Malvika to hate her, not Anuj. She also kisses Malvika’s forehead and hugs her tightly. Anuj says, “All the best” to Malvika and gives an angry glare to Vanraj. Malvika suddenly stops Anuj from behind. She lets Anuj and Anupama leave, recalling Vanraj’s provoking words. Malvika cries profusely after Anuj and Anupama leave, Vanraj stares at her continuously. Anuj and Anupama recall their happy moments with each other and Malvika in the Kapadia office.

Both Anuj and Anupama drink coffee together. Anupama tells Anuj her opinion/experience about home and office life. She also tells Anuj that she understands how he would be feeling. In the next episode, Vanraj will evilly sign Goodbye to Anupama. Angry Anupama will hold Anuj’s hand and leave Kapadia office. Anuj will ask Anupama where he should go now. GK will tell Anupama that Anuj came for Kapadia family and leaving everything for the same for the same family. He will ask Anupama to be with Anuj. Anupama will tell GK that she will always be with Anuj. She will further say that she will handle love too like she always handled her duties and responsibilities.

Reviewed Rating for Anupama 9th February 2022 Written Update Anupama vows love: 3/5 This rating is solely based on the opinion of the writer. You may post your own take on the show in the comment section below.