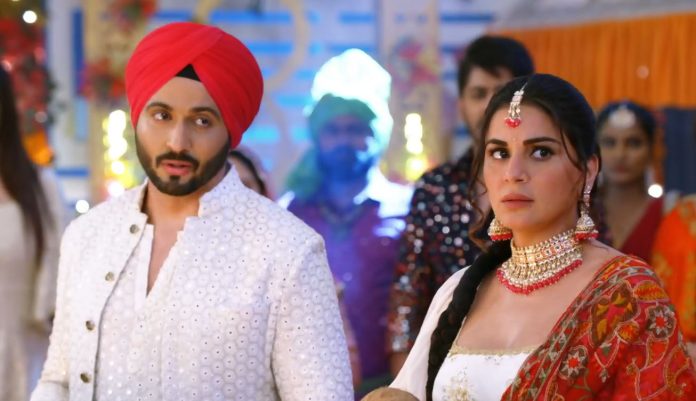 Kundali Bhagya 10th February 2022 Written Update Karan rescues Preeta Karan recalls Naagre’s words and tries to decode the meaning that Preeta won’t get saved. Prithvi tries to stop Karan from performing the puja with Preeta. Karan questions him a lot to know why is he stopping him. Prithvi thinks to not invite suspicion and makes an excuse. He asks Karan to perform the puja as he likes. After the entire family performs the puja, Prithvi awaits Karan and Preeta to come ahead and face their death. He thinks once Preeta strikes the coconut to break, the bomb will explode and Karan will also die along with Preeta. He sees Preeta sitting down to break the coconut as per the rituals.

He pulls Sherlyn and Kritika back, who matter to him and are useful for him. He smiles seeing Preeta close to her final moment. Karan watches Prithvi’s wicked smile and wonders what is on his mind. He finds Prithvi stepping back, and waiting anxiously for Preeta’s puja. He recalls hearing about the coconut. Preeta takes the coconut to break. Karan rushes and stops her from breaking the coconut, by keeping his hand under it. Karan acts wise in time and saves Preeta from death. Karan fails Prithvi’s plans.

Preeta asks Karan why did he take the coconut from her puja plate. Karan tells that its his wish, he will break the coconut. She asks him not to make any bad omen and just return the coconut. Karan can’t let Preeta fall in danger. He has to save her because she is the love of his life. He asks her not to fight for a coconut, they are one and can share things. He gets into a fake argument with her so that the family doesn’t panic knowing about the danger. Karan takes the coconut with him and runs away. Preeta and the family are shocked to see this. She shouts to ask Karan where is he going and why. Karan doesn’t answer anyone and runs out of the house to throw the coconut away. He wants to protect his family. Prithvi hates Preeta and wants to kill her. He wants the entire powers in his hand. He had to lose once again.

Later, Karan and Preeta go inside the house. They find the family upset. Karan asks the family what happened that they are so upset after having big celebrations. The family shares about Mahesh’s sudden deteriorated condition. Sherlyn has planned to prove Mahesh insane by giving him harmful drugs again. She thinks her plan will fail if Prithvi’s plan fails. What role does Mahesh’s doctor play in this scene? Will Preeta learn about the drugs administered to Mahesh? What would happen with Mahesh? Keep reading.

Prithvi tells that Karan will perform the puja alone and then Preeta will end. Karan asks who is he to say him. Prithvi tells that the pandit has said so, Preeta is the house owner and will perform the final puja. Karan tells that he is also the house owner and Preeta’s husband, the puja should be done in pairing. Prithvi thinks he was stopping Karan to save him, but now Karan is yearning to die. Karan wants to be with Preeta, doubting that something is wrong. Preeta tells that she will perform first. Karan tells that they will do it together. Pandit asks them to do as they want and just pray to get their pairing blessed. Karan asks Preeta to take seven rounds with him.

He takes the rounds with Preeta and makes new vows to her. He vows to always support her and love her. Preeta also vows to fulfill every duty of a wife and always support Karan. She sits down to break the coconut. Prithvi smiles and pulls back Sherlyn and Kritika. Karan suspects Prithvi. He stops Preeta from breaking the coconut. Preeta asks Karan what is he doing. He tells that he will break both the coconuts. They get into a kiddish argument. Rakhi laughs hearing their funny banter. Karan tells that the puja is done by her and now he will break the coconut. Preeta asks him not to make any bad omen. Bani asks them not to fight. Karan runs away with the coconut. Kareena asks if the puja is done this way.

Rakhi tells that Karan and Preeta didn’t change, they are still fighting like kids. Janki tells that she liked to see them like before. Shrishti tells that she didn’t understand why Karan ran with the coconut and Preeta ran after him. Doctor tells Rakhi that he wants to meet Mahesh before leaving. Rakhi takes him along. Sherlyn tells Prithvi that there is no use to run after Karan and Preeta. She gives him a big news. She tells that its time to send Mahesh back to the basement. She takes him for the surprise.

Preeta asks Karan why is he running with the coconut. He asks her not to stop him. She tells that she doesn’t like his prank. He doesn’t care. Mona provokes Mahesh and messages Sherlyn that she is bringing Mahesh out for his new insane drama. Mahesh catches her to suffocate her. Rakhi and family arrive there. They find Mahesh getting too violent and attacking Mona. Doctor asks them why did they keep Mahesh in the house, instead the basement. The family asks Mahesh to stop. Prithvi catches Mahesh. He tells that he told them that Mahesh should be in the basement, everyone is in danger because of Mahesh. He takes Mahesh with him. Karan reaches some cliff and throws the coconut bomb away. Preeta watches the blast and is terrified. She pulls back Karan and hugs him, realizing that he ran with the coconut to save her life. She cries for him. He wipes her tears.

They both get into a moment. Prithvi, Naagre and Sameer hold Mahesh. Mahesh recalls the electric shocks given to him in Prithvi and Naagre’s presence. Doctor injects Mahesh and puts him in sleep. He asks Rakhi to keep Mahesh in the basement, that too chained, he has turned too dangerous. Karan and Preeta arrive home. She tells that their moment was situational, he shouldn’t take her granted, she pulled him to save him from falling, she had no feelings for him. Karan asks her to meet his eyes and say it. She intentionally makes him away. They find the family in sorrow. Bani tells them about Mahesh’s attack. Prithvi gets upset that Karan saved Preeta, she always gets saved from death. He wants to remove her from his Kundali Bhagya, so that he gets his freedom and powers back.

Reviewed Rating for Kundali Bhagya 10th February 2022 Written Update Karan rescues Preeta: 4/5 This rating is solely based on the opinion of the writer. You may post your own take on the show in the comment section below.