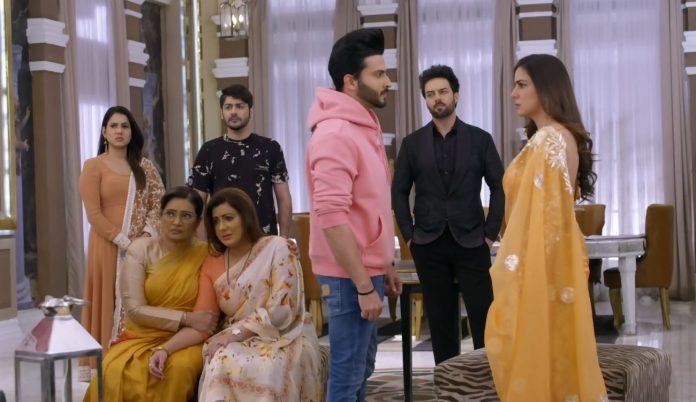 Kundali Bhagya 18th February 2022 Written Update Impulsive Karan Kareena tells Karan that they all will leave the house and also take Mahesh along, then they will get rid of Preeta’s domination. Preeta gets worried. She keeps calm. She asks Kareena what is she saying. She tells Karan that he can take the family and go if he wants, but then he won’t get the re-entry in the house if he decides to change his mind. Karan tells done, in response to Preeta. Preeta doesn’t want them to go and make a mistake. Karan and Kareena take the decision impulsively. Preeta knows that Prithvi will trouble them more and things won’t be easy if they leave the house. Karan wants to protect Mahesh, and give security to Rakhi.

Earlier in the show, Karan tells that Preeta is doing this on her own, he never supported her for the wrong. He doesn’t want any explanation from Preeta. He asks her to take revenge on him, not his dad. Bani warns Preeta. She tells that she will oust Preeta from the house if Mahesh is sent to the mental asylum. Preeta stops them from yelling at her, when they have no right to scold the house owner. She asks them to talk to her with manners. She tells that the house belongs to her, nobody has a right to oust her.

Karan tells that he will take the family and leave the house if Mahesh is taken to the mental asylum, then Preeta can stay alone and enjoy her ownership. Rakhi tells Preeta that Karan is saying right, Mahesh’s safety comes first. She supports her family. Preeta asks Karan to come with her for a talk. She takes Karan along. Prithvi gets glad that Preeta fell in the family’s sight. He likes the drama.

She asks Karan to come fast, Rakhi has fallen unconscious. Karan and Preeta rush to see Rakhi. Natasha asks Preeta why is she tensed when she is herself responsible for Rakhi’s condition. Preeta asks Natasha not to hit one liners and trouble her. She cares for Rakhi. She rebukes Natasha for igniting fire in the relations. Karan asks Preeta to stop arguing and think of Rakhi. Prithvi tells that he agrees with Karan for the first time. Sherlyn tells that everybody will agree with Karan. Natasha asks Preeta to tell them why is she such, when Rakhi loves her a lot. She makes Karan angered by telling him about Preeta’s ownership attitude. She adds that Preeta is aware of the situation and the consequences, even then she had angered Mona purposely. Preeta tells that they shall focus on Rakhi first.

Karan tells that Preeta is doing a drama to impress them, when her motive is to rule over them. Kareena suggests that they leave the house and take Mahesh along with them. Preeta doesn’t want them to leave the house. She wants to find out who is responsible for Mahesh’s condition, where did Rishabh go and how is Prithvi overpowering them. She tells that she is the owner of the house, the family can leave the house, whoever goes out once will never be able to come back home. Karan agrees. Preeta tells that they can’t take Mahesh with them. She adds that there is a clause in the property papers that Mahesh will stay in the house at all times, the Luthras can go if they want. She feels helpless to speak to them in that manner. She leaves them to decide. Natasha asks Karan about his love for Preeta.

She tells that Preeta has insulted his entire family in a single row. She adds that Preeta is treating Mahesh as if she has kidnapped him. Kareena asks Natasha to stop it. Natasha tells that Karan has to do something to stop Preeta from insulting them next time. She asks Karan to realize that he should control Preeta as her husband. Karan goes to Preeta in rage and upsets her by an argument. He tells that she always claims of loving Mahesh as his daughter, but she is a stain on the relation. She tells that she will not let him do what she wants, she is the owner of the house. He can’t believe that he loves her. She tells that its his problem if he loves her.

He replies that he will end his problem soon. She tells that she will not fall in love, she will bring Mahesh out of the basement and fulfill her promise. He tells that he is enough alone for his family. She tells that its his misconception. He is hurt by her words. He tells that she should feel guilty, but she is so arrogant. She tells him that she isn’t guilty, he will never understand her emotions, she wants to bring Mahesh out of the basement because of some reason. He asks her the reason. She tells that she wants the good for Mahesh because he wished good for her, she has a feeling of gratitude. He thinks she made a mistake by taking the property’s name, she should have mentioned that the reason is her love. He feels she broke his heart again.

She apologizes in her heart to say the wrong reason, she can’t tell him that her real concern is because of her reason. She doesn’t want Karan to know her motives that she has come to save the family from enemies. She wants to keep her emotions to herself. Biji pampers Shrishti. Shrishti praises herself that she is the best. She thanks Biji for the best head massage. Janki shows that Shrishti always gives her headache to someone else. Shrishti tells that she never does so. Preeta speaks to her family. She tells Biji that she missed her a lot on Lohri. Biji tells that Sarla didn’t come back home with her, she stayed in the village for some more days. Preeta tells that she needs Sarla’s support. Biji asks her the problem. Preeta tells that she needs Shrishti’s help. She asks Biji to come home with Shrishti. Shrishti tells that Preeta is okay. Preeta wants to adopt an old tested way to solve the problems.

Reviewed Rating for Kundali Bhagya 18th February 2022 Written Update Impulsive Karan: 3/5 This rating is solely based on the opinion of the writer. You may post your own take on the show in the comment section below.