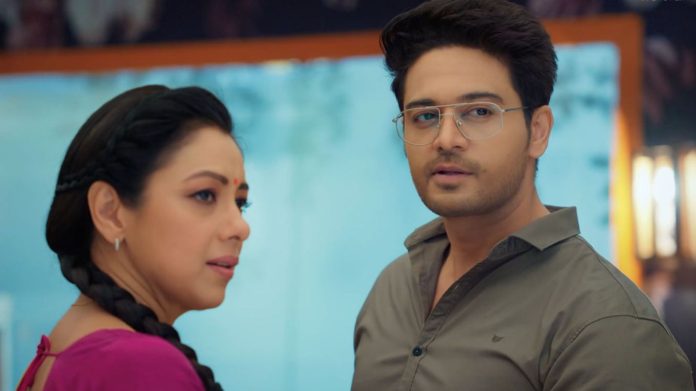 Anupama 21st February 2022 Written Update Promising News Anupama says to Baa that she knows that she will ask her to marry Anuj if they want to live near each other. Vanraj interrupts Anupama’s conversation and tauntingly asks her why she will marry a billionaire turned beggar now. Anupama tauntingly answers Vanraj that he too didn’t have anything when she married him. Vanraj asks Anupama if she doesn’t feel bad that Anuj has nothing to give her. Anupama asks Vanraj to not be in a misunderstanding as Anuj gives love, modesty, respect and equality. Kavya smirks, feeling irritated.

She tells Vanraj that Anuj has no wealth left but still gives her respect, modesty, equality, and love. Anupama also tells Vanraj that he has nothing to give to anyone. She asks Kavya if she ever got anything like modesty, love, respect and equality. Vanraj glares at silent Kavya. Kavya bows down her eyes into embarrassment. Anupama apologizes to Baa and Bapuji for talking like this. She says she has to answer like this because Vanraj always pops out these types of silly questions. Baa says questions will be raised. She asks Anupama to marry Anuj to shut society’s mouths and questions. Anupama tells Baa that a person marries for himself and herself, not for society. She says society doesn’t perform marriage rituals and doesn’t have any relation to marriage.

Anupama asks Baa why she should get married for the sake of society. She says society always wants to keep people behind or under them. Anupama also says that she doesn’t fear society and won’t stop living her life due to society’s fear. She tells Baa that she will make a decision about marriage herself, not from society’s perspective. Anupama asks Baa why her marriage failed when she earlier married according to society. She indirectly taunts Vanraj by saying that she married at the right age to a right man in society’s eyes. Anupama asks Baa why didn’t society help her when she was suffering mental harassment in her first marriage. She tells Baa that she doesn’t care about unhelpful people or society raising fingers at her.

Anupama says she doesn’t fear society as it will scare her more if she remains scared of them. She says her relationship is unique and will remain unique. Baa asks Anupama if she and Anuj won’t get married after having so much between them. Anupama says whatever would happen she and Anuj will decide, not people. Bapuji praises Anupama. Anupama thinks of telling about her confession to Anuj to Bapuji, Kinjal and Samar later on. She asks Bapuji what was happening in Shah house before her arrival. Samar takes Anupama with him and tells her about his and Nandini’s break up. Anupama gets shocked on hearing that Nandini left Samar by breaking up with him. Samar says he didn’t feel right to stop Nandini.

He tells Anupama that he didn’t want to make Nandini stuck with him if she didn’t want it anymore. Anupama says Nandini would have a reason behind her decision. Samar tells Anupama that Nandini had many reasons to leave him. Anupama tells Samar that he had reasons to stop Nandini but he didn’t stop her. She also tells Samar that he did the right thing as we can love somebody but can’t force the other person to love them too. Both mother-son hug each other. Samar tells Anupama that he let Nandini go as it was good to break their relationship beforehand as it could have broken after marriage too. He says it isn’t important that every relationship could get fixed.

Anupama tells Samar that neither he nor Nandini is wrong. She asks Samar to remember to love himself always as he and Nandini didn’t do anything selfish. Anupama tells Samar that self love is equally important. She asks Samar to not repeat her mistake of hating love. Samar tells Anupama that he doesn’t know if he ever would be able to fall in love again or not. He says that right now he has only one goal in life, that is to become successful in life. Anuj reaches the dance academy. Samar tells Anuj that he saw the shoot location for the promotional video and has also talked to the editing and camera team. He says only the final shoot date is to be decided. Anuj praises Samar’s work. He tells Anupama that he won’t think about his own work till he decides about her dance academy’s marketing and promotional activities.

Anuj tells Anupama that he would help her grow her dance academy till he makes a decision about his own business. At Shah house, Vanraj wonders why Anupama and Anuj still have so much confidence in them. He fears how Anuj and Anupama are restarting their business. Baa sees Pakhi smiling while talking secretly to someone on call. She thinks Pakhi is on the wrong path. Pakhi is seen apologizing to a boy on call for not being able to meet him on Valentine’s day. The boy calls Pakhi “baby” and forgives her. At the dance academy Anuj keeps staring at Anupama. Anupama cutely scolds Anuj. Anuj asks Anupama to not be sad saying that Samar would get better in some time.

Anupama tells Anuj that Baa again came to her topic. Anuj asks Anupama if Shahs said something about them. Anupama tells Anuj that they have become Vanraj’s favorite topic. On Anuj’s insistence, Anupama tells him about how Baa and Vanraj raised questions on them and their relationship. She doesn’t tell Anuj that Baa asked her to marry him (Anuj). She goes outside and sees someone’s marriage decorations going on and recalls Baa’s advice of marrying Anuj to shut society’s questions. Back at Shah house, Baa keeps trying to spy on Pakhi and collides with her. Pakhi unravels that Baa is spying on her. Pakhi tells Baa that she was talking to her friends on call in english as they also talk in english. Baa asks Pakhi how she would understand her conversation then.

Pakhi gets angry and asks Baa to give her her privacy. Baa warns to slap Pakhi. Pakhi rudely tells Baa that it’s of no use to talk to her. Vanraj overhears this and gets angry at Pakhi for talking to Baa rudely. Pakhi apologizes to Vanraj and tells him that Baa is interfering in her matters these days. Baa tells Vanraj that she doesn’t find Pakhi’s characteristics good as she talks on phone the whole day. Pakhi lies to Vanraj that she discusses homework on call with her friends. Baa asks who discusses homework on call in such a low voice. She says earlier Pakhi used to talk loudly on call. Baa tells Vanraj that Pakhi returns late from school daily and makes different excuses daily. Vanraj gets lost into thinking.

At the academy, Anuj shoots Anupama’s dance for a promotional video of her dance academy. Both of them start dancing together later on. The couple’s dance turns out to be Anupama’s imagination. Anuj alerts Anupama to continue dancing as he is shooting her. Anupama gets shy and continues dancing. Anuj collides with Anupama and both of them save each other from falling. They recall each other’s first dance academy meet. Anuj speaks a poem about their meeting.

In the next episode, Vanraj will taunt Anupama telling her that kids get badly affected seeing their mother romancing her boyfriend. Anupama will ask Vanraj if children get good values seeing their father having extra marital affairs and cheating on their mother. Anuj will tell Samar that a person needs to find happiness on their own. He will also tell Samar that happiness is arriving in the form of Anupama’s birthday soon. Vanraj will ask Anupama when she will return to give lectures again. Anupama will tell Vanraj that she will soon return to give him news that will shake him up.

Reviewed Rating for Anupama 21st February 2022 Written Update Promising News: 5/5 This rating is solely based on the opinion of the writer. You may post your own take on the show in the comment section below.