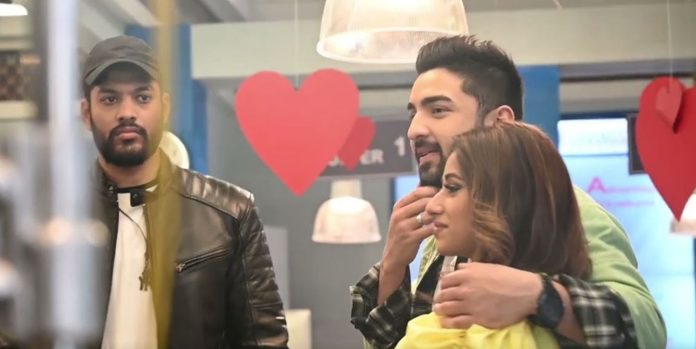 Bhagya Lakshmi 22nd February 2022 Written Update Rishi shot The chief tells that he really wanted to know who Rishi loves the most. He adds that he will shoot the person Rishi loves the most. He decides to send Rishi outside to get the keys. He tells that if Rishi doesn’t get the keys, then he will shoot his lover. Malishka is held at gun point, and seems that she is chosen by Rishi as her lover. The chief threatens of shooting Malishka. He calls Rakesh and tells that he is sending Rishi outside to get the keys. He asks Rakesh to not keep Rishi with him, because Rishi’s life, his lover is at gun point. Virender gets worried when he senses that the guns are made of iron and Rishi is threatened of iron on this day.

He sees the constable with the iron metal gun, and gets worried for Rishi, recalling the prediction of the Pandit. Rishi gets into a fight with the robbers, who try to hurt Lakshmi. He asks everyone to just run away. Lakshmi, Shalu and Ayush try to escape. Lakshmi worries for Rishi’s life. She wants to say back with Rishi. Rishi takes Malishka with him and attempts to flee. Lakshmi runs away, and stops when she hears a gun shot. Lakshmi wishes that Rishi stays safe. Virender also hears the gun shot outside and hears for Rishi. Will Lakshmi learn the entire truth of Rishi’s Markesh Dosh this time and succeed in saving his life? Keep reading.

Earlier in the show, Shipra catches Lakshmi at the knifepoint. Rishi begs her to spare Lakshmi. Rishi and Lakshmi cry seeing each other with concern, while their eyelock makes Malishka cry in sorrow and anger. Virender and Neelam reach the bank. They ask for Rishi. They meet Karishma, and learn that both Rishi and Ayush are inside the bank. Neelam gets afraid for Rishi. News reporter sees Virender and goes to take bytes. The chief asks Rishi to choose who he loves the most, who he wants to save, Lakshmi or Malishka. He tells that just his lover will be alive now. Rishi falls into a dilemma.

Neelam begs Rakesh to save her son. Rakesh tells that he is doing his work. He speaks to his senior. He tells that it will be a huge loss but he has to save the hostages. Virender is already worried. The reporters trouble him more by their questions. He tells them that his son is stuck inside. He goes away to shed tears. He realizes the real threat on Rishi’s life. He regrets that he didn’t listen to Neelam before. He knows that she can’t live if anything happens to Rishi. Karishma consoles Neelam. They both share tears of sorrow for their sons.

The chief tells that he has to have some timepass entertainment until Rakesh calls him. He wants to know who Rishi loves the most, Malishka or Lakshmi. He asks Rishi to just say it. Rishi names Malishka, making Lakshmi cry more in sorrow. He tells that he loves Malishka. The chief tells him that he had asked this to know who Rishi loves the most, because he will kill that person first. He adds that he will send Rishi outside to get the locker master keys, he wants a bait to call Rishi back, Rishi will certainly not let his lover die. He asks his men to point the guns at Malishka’s head. He threatens to kill Malishka if Rishi doesn’t come. He mocks Rishi’s feelings. He tells that Rishi is lying, he loves Lakshmi more than Malishka.

Rishi and Lakshmi recall their argument. Rishi tells Malishka that he doesn’t have the card with him. He lies to her. He still has the card with him in his jacket’s inner pocket. He tells Malishka that the card fell down somewhere. The chief gets Rakesh’s call. He asks Rakesh to handover the keys to Rishi. He tells that Rishi’s lover is at gun point, so Rishi has to come back. Rakesh tells that he hates criminals and crime. He asks the chief to keep a few people and leave the rest. The chief agrees to just leave four people. Rakesh bargains with him. He asks the chief to trust him, because there is no other option. Neelam prays that Rishi and Ayush come outside. Kiran gets the shocking news of the bank robbery.

She worriedly calls Rishi. The chief tells that four lucky people will be going out. He plays a game with them to find out who will be going out. Rishi loses his cool when he finds Lakshmi hurt. He initiates a fight with the goons. Lakshmi runs away. She hears a gun shot. She worries for Rishi. Shalu tells that she has nobody in her life except Lakshmi. She asks Lakshmi to not go back to Rishi, and think of Bani, who is their responsibility. She asks Lakshmi to hide with her. Rishi and Malishka get caught once again. The chief asks the gang to find Lakshmi and Shalu. He summons Lakshmi to come back. He threatens that he will shoot Rishi. Rishi asks Lakshmi to not come back.

The chief asks Lakshmi to come immediately if she wants to see Rishi alive. He tells Malishka that he will show her true love, Lakshmi will come to save Rishi, because she loves him. Lakshmi runs back and risks her life for Rishi. Rishi and Lakshmi have an eyelock. Malishka rebukes them for their love, when they say they don’t love each other. She doesn’t want them to fool her. The chief tells that he has to do their work now, Rishi will be going out and getting the keys, if anything goes out, then Lakshmi will die. Rishi tells that nothing will happen to Lakshmi, he will surely come back. He asks Ayush to not come with him. Ayush hugs Rishi. He asks Rishi not to take tension. Rishi feels his life is getting complicated. He tells that he cares for Lakshmi, he feels sorry for her.

He shows the card which he kept for Malishka, but didn’t give her. He tells that Malishka wanted him to get the card back from Lakshmi, but he didn’t want that, he had seen Lakshmi reading the card and getting emotional, he couldn’t take it back from Lakshmi, she feels everything for him, she said that herself, and then returned the card to him. Ayush asks Rishi to realize his love for Lakshmi. The goons take Rishi with them and fix a mic to his clothes. The chief threatens Rishi and asks him not to reveal any information about them to the police, else Lakshmi will die. Rishi asks Ayush to be with Lakshmi, Malishka and Shalu. He goes out to get the locker keys. Ayush prays that Rishi and Lakshmi get together. Keep reading.

Reviewed Rating for Bhagya Lakshmi 22nd February 2022 Written Update Rishi shot: 4/5 This rating is solely based on the opinion of the writer. You may post your own take on the show in the comment section below.