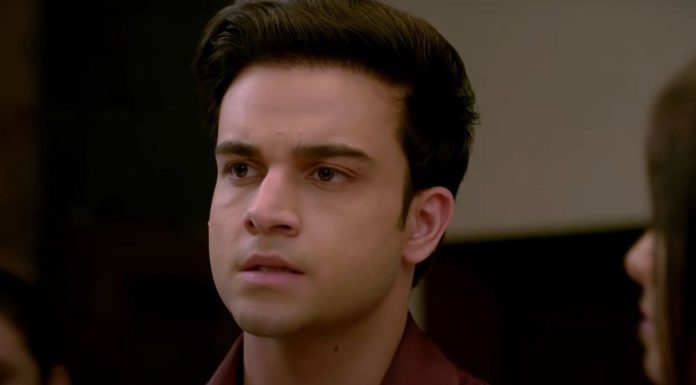 Kumkum Bhagya 22nd February 2022 Written Update News for Ranbir Pallavi and Vikram take Ranbir, Rhea and Prachi home. Pallavi rebukes Prachi for playing such a disgusting and disgraceful game. She tells that Prachi has scared them of police and the NGO supporters to make them accept her as Kohlis Bahu. She adds that Prachi has threatened them to make Ranbir fill the Kumkum in her hairline. Prachi answers that Pallavi had poured the water over her head and washed off the Kumkum of Ranbir’s name. She tells that she was helpless to take this step as an answer to Pallavi’s disgusting action. Ranbir wasn’t at home when this incident took place. He is shocked to know what Pallavi did in his absence to insult Prachi. He can’t believe that his mom can take such a step against Prachi, knowing Prachi is carrying Kumkum of his name. He gets highly disappointed with Pallavi. He questions Pallavi’s actions and leaves her speechless.

Earlier in the show, Ranbir accepts that he made a mistake by marrying Rhea. Rhea gets hurt by his statement. He admits that it was wrong that Rhea has come into his life, The NGO ladies ask Rhea to stay away from Ranbir. Ranbir tells that he regrets that he didn’t realize his mistake before. Inspector tells hat Ranbir is a decent guy, so he can get spared from the wrong charges. The NGO ladies ask Prachi to call them if she needs help. Rhea rebukes Prachi for her sudden hit. Prachi asks Rhea to remember this defeat before challenging her next time. Prachi feels that she has got her family members back. Rhea gets Pallavi and Aaliya’s support, while the rest of the family joins Prachi.

Prachi is glad that she got some of her family members back. Rhea asks Prachi to call anyone on her side as she wants, but the one who has Ranbir will win. Prachi tells that she has Ranbir’s Kumkum in her hairline, she has Ranbir with her and she has won. She asks Rhea to talk when she comes back home. Rhea calls this Prachi’s mistake. Prachi tells that its her mistake that she tolerated Rhea’s crimes. She threatens of getting Rhea punished for all the crimes. Rhea asks Prachi to beware of her, she is coming back home really soon. Prachi tells that she will be waiting. Rhea is taken back to the lockup. Prachi gets praised by Dida and Shahana. They tell that Prachi has won the rights on Ranbir, Prachi has got acceptance from Pallavi. Prachi cries that she has troubled Rhea so much, Rhea would be in lockup all night.

She doesn’t like what she is doing. Dida hugs her. She tells Prachi is feeling guilty, that’s her goodness. She encourages Prachi to be strong and not tolerate any wrong. She tells that everything will be okay soon. Shahana tells that Prachi is lucky to get Dida with her. Pallavi goes to her car. She asks Prachi to come in the taxi. She asks Vikram to drive the car. Dida asks Vikram to go home. Pallavi leaves for home. Prachi feels something wrong may happen. She wishes Rhea was like Shahana, loving and caring. Rhea gets angered that Prachi has played a cheap game with her. She thinks it was all Prachi’s planning to get the Kumkum from Ranbir’s hands.

She had imagined many things for her honeymoon, but she couldn’t do anything. She feels everything went wrong, Prachi is with Ranbir right now, Pallavi couldn’t do anything, but get Kumkum for Prachi to make her victorious. She feels like she isn’t Ranbir’s wife. She vents anger on the jail inmates. The inmate threatens of killing her. Rhea unwillingly apologizes to her. Prachi thanks the NGO ladies for coming to help. The NGO ladies ask Ranbir to love his wife and stay a one-woman man, nobody can be equal and pure as his wife. They warn Ranbir against troubling Prachi. Ranbir thanks Prachi for coming on time and rescuing him. He wants to know if Prachi is angry on him. He tells that he knows to convince her.

He apologizes to her. He does a charming act. He does sit ups to convince her. The NGO ladies laugh seeing him. Prachi tells that she has forgiven him. He asks her to tell that she has forgiven him. She tells that she accepts his apology. He asks her to hug him and prove it. The NGO ladies ask them to hug. Prachi hugs him. They get into a moment. Ranbir thanks the NGO ladies for helping him convince his wife. He offers to drop them home. The NGO ladies call him a good romantic husband. Prachi asks Ranbir how can he offer the lift to them when he has no car. She tells that Pallavi left in the car. Ranbir goes to book a cab. The NGO ladies find him a charming guy. Ranbir seeks their permission to take Prachi home. Prachi leaves with Ranbir. They have a hearty talk on the way. Ranbir asks Prachi about the NGO ladies who had come to help her.

He tells that he wants to gift her something on the valentines day. She tells that she already got it, that’s the Kumkum. He tells that it belongs to her always. Prachi tells that he forgot this fact. He questions her why didn’t she apply the Kumkum today. She tells that the Kumkum got washed off. She adds that she had wiped the Kumkum herself. Ranbir knows that Kumkum means a lot to her and she can never wipe it off. He asks her not to confuse him and just say the truth. He tells that he knows her move of sending the police to the hotel room, and getting Rhea and him arrested. Prachi doesn’t confess. She falls asleep on his shoulder. Ranbir cares for her and wakes her up when they reach home.

Vikram finds Pallavi fuming in anger. He tells the good news that he spoke to the lawyer, Rhea will get bailed in the morning. Pallavi asks him not to talk to her right now, because she just wants to talk to Prachi. She stops Prachi from entering the house. She tells that its her house, and she will decide who comes inside. She worries for Rhea. She asks Vikram if he isn’t worried for Rhea. Prachi tells that even she is Abhi’s daughter like Rhea. She argues with Aaliya. She tells that she has kept many things safely with her, if she starts telling the secrets, then Aaliya and Pallavi won’t have any answer. Pallavi doesn’t think Prachi is a nice person, because her thinking and actions are disgusting.

Reviewed Rating for Kumkum Bhagya 22nd February 2022 Written Update News for Ranbir: 5/5 This rating is solely based on the opinion of the writer. You may post your own take on the show in the comment section below.