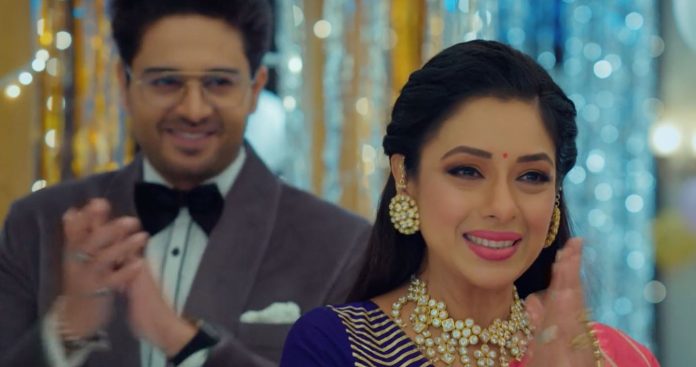 Anupama 1st March 2022 Written Update Anupama stuns Anuj Kinjal tells Anupama that she got to know about her pregnancy on the morning of Valentine’s day. She says she was thinking about revealing it since then. Kinjal tells Anupama that she wanted to surprise her with her pregnancy news on her birthday but herself ruined her surprise. Anupama tells Kinjal that this is the most wonderful surprise. On the other hand, Anuj wishes that Anupama replies to his proposal soon, as he is ready with Baaraat and Mangalsutra. Inside the room, Anupama gets very happy with Kinjal’s pregnancy news. She screams in happiness that she is going to be a grandmother.

Kinjal tells Anupama that she is feeling scared thinking if she would become a good mother like her or not. Anupama tells Kinjal that she would become an even better mother than her as she is more educated and beautiful. Kinjal asks Anupama if she would be with her in every stage of her new journey. Anupama calls Kinjal “younger Anupama” and promises to always be with her. Both of them hug each other. She tells Kinjal that she would always spoil her grandchild and support him/her if Kinjal will scold him/her. Both of them laugh. Mamaji sprinkles water on Baa and says that Baa got conscious. Baa reminds Mamaji that Kinjal fainted, not her.

Baa asks everyone to have food as Kinjal has Anupama with her. Vanraj wonders why Anuj is blushing. Anuj hopes Anupama would end his wait soon, by replying to his proposal. Anupama asks Kinjal why she didn’t tell anyone till now. Kinjal tells Anupama that she couldn’t tell anyone as Vanraj and Paritosh remain angry the whole day. She also tells Anupama that it was important to tell her about her pregnancy on her birthday as a gift to her. Kinjal tells Anupama that now she can tell everyone about it as a return gift. Anupama hugs Kinjal and tells her that this is the best birthday gift she received. Dolly asks Bapuji if Anupama expressed her feelings to Anuj. Bapuji says yes.

From a distance, Dolly wishes, “All the best” to Anuj. GK asks Anuj to not feel scared as Anupama would come and surely tell everyone about her reply to his marriage proposal. Suddenly, Anupama comes downstairs by dancing on the song “Dholida” from the film “Gangubai Kathiawadi”. Everyone gets confused seeing Anupama’s sudden dance and happiness. Anupama tells everyone that she wants to give everyone the biggest and happiest news of her life. Baa and Bapuji ask Anupama what is the good news. Anupama continues jumping and dancing. Her journey from childhood to teenage to a married woman to motherhood is shown in flashback. Flashback also shows Kinjal and Paritosh’s marriage and Kinjal’s pregnancy news is also shown.

Vanraj comes near Anupama and asks her what happened. Anuj and Baa also ask Anupama what made her so happy. Anupama tells everyone that Kinjal is pregnant. Everyone gets happy hearing this news. Vanraj holds Anupama’s hands in happiness. Anuj doesn’t like this. In her thoughts, Kavya asks Vanraj to learn to take out time for wife in between fights and arguments, like Paritosh did. Kinjal gets happy seeing everyone happy from a distance. Anuj and GK feel happy for Kinjal but also feel a little disappointed that Anupama could not reply to Anuj’s marriage proposal in between all this. Samar brings Kinjal in between everyone. Anuj tells GK that it’s fine as it’s a bigger happy news right now. He also tells GK that he became a grandfather before becoming a husband.

Anuj wishes to marry Anupama before Kinjal gives birth to her child. Paritosh doesn’t seem happy and excited wholeheartedly, but still smiles in front of everyone. Kinjal and Paritosh take blessings from Baa. Everyone dances around them, except Anuj and GK. Kinjal asks Paritosh if he is happy with her pregnancy news. Paritosh lies to Kinjal, saying that he is happy. In between her dance, Anupama looks at Anuj and gets guilty. Anuj smiles to not show his pain to her. Guilty Anupama involves Anuj in her family dance. Anuj and Anupama dance with each other by looking at each other. Kinjal thanks everyone.

Samar tells Anupama that she got a very good gift on her first birthday celebration. Kinjal reminds Anupama that she also wanted to tell something to everyone. Anupama says that she wanted to tell everyone that their dance academy’s live classes website has launched and many people have taken admission in their dance academy. Anuj gets disappointed hearing this but still smiles. Baa asks Anupama if she was excited for this small news. Vanraj asks Anupama if she is sure that she wanted to tell this and nothing else. Bapuji and GK feel bad for Anuj and Anupama. Bapuji congratulates Anupama. Everyone claps for Anupama.

Anupama tells Baa that she wants to make bhog of Makhane and Shakar for Kinjal and her upcoming baby, like moti baa made her eat. She asks Kavya if Makhane is available in the house. Kavya asks Baa about it. Baa scolds Kavya and asks her who is the mother in law, her (Kavya) or her (Baa). Samar offers to bring from the shop but Anupama goes outside with an excuse to buy Makhane. Guilty Anupama goes outside and recalls Anuj’s excitement for her reply to his marriage proposal. She grows more guilty that she couldn’t give a reply to Anuj in front of everyone as she planned to. She goes a little far and cries profusely. Anupama wonders why she couldn’t reply to Anuj’s marriage proposal in front of everyone.

Reviewed Rating for Anupama 1st March 2022 Written Update Anupama stuns Anuj: 4/5 This rating is solely based on the opinion of the writer. You may post your own take on the show in the comment section below.