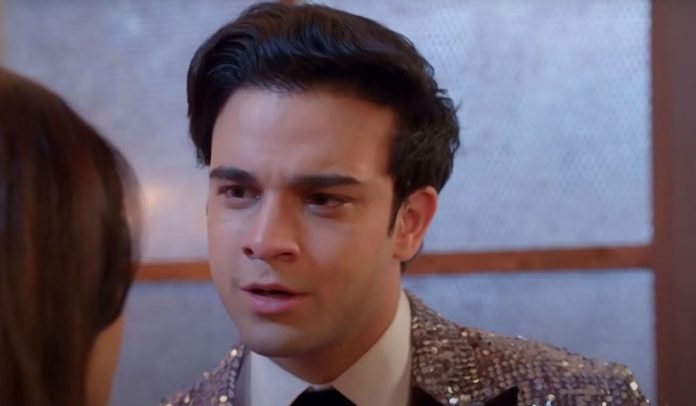 Kumkum Bhagya 3rd March 2022 Written Update Unexpected twist Siddharth returns home during the party. Rhea spots Siddharth with Prachi. She clicks their picture, when Siddharth holds a stumbling Prachi in his arms. She thinks that’s the best gift she got. She goes to tell Aaliya about Siddharth’s entry. She tells that she has seen Siddharth with Prachi, and the way they were together, it means that they are really into a relationship and Prachi is carrying his child. She suspects Prachi’s character and thinks its good if its true. She shows the pictures to Aaliya. Ranbir gets Prachi’s test reports.

He thinks if its Prachi’s blood test reports. He wants to find out if she is okay. He opens the envelope to check the reports. Rhea learns that Ranbir has received the reports. She thinks to stop him, because her plan is to expose Siddharth and Prachi’s truth in front of everyone in the party. Rhea snatches the envelope from Ranbir. Ranbir happily looks forward to meet Prachi on the terrace and awaits her surprise. Why did Siddharth return home? Will Rhea defame Prachi by maligning her character once again? Keep reading.

He sees Rhea coming and takes Prachi to the room. Rhea sees someone with Prachi. She follows Prachi to find out. Siddharth tells Prachi that he didn’t return home, but he is happy to see Prachi so happy. Prachi tells that she is happy for a big reason, she is going to tell Ranbir about her pregnancy. He asks her why didn’t she tell him the truth. She tells that she has to discuss the truth with Ranbir, she has finally got a chance today to share her feelings with Ranbir. He likes the plan. He tells that Ranbir will be very happy. He wishes her all the best. He tells that he has to leave. She wants to know how did he come suddenly. He doesn’t tell her that his business flopped.

He thinks he shouldn’t tell her, else she will worry. He tells that he was missing her and the baby, so he has come to meet her. She tells that she didn’t tell anyone in the family about her pregnancy. Rhea overhears them. He asks her to tell them about the baby and make them connect with the baby. Rhea thinks its their baby and they want a Kohli stamp on it. She decides to expose their affair. Prachi feels dizzy. She falls into Siddharth’s arms. He holds her as a caring friend. Rhea clicks their pictures. She thinks their secret romance will be now known to everyone. She goes to Aaliya.

She tells that she has seen Siddharth with Prachi, he was asking Prachi to tell the family about the baby and make them bond. She tells that its confirmed now that its Siddharth and Prachi’s baby. Aaliya can’t believe it. Rhea shows the pictures she captured. Aaliya is shocked to see that. Rhea tells that Siddharth came to meet Prachi secretly, which means that they have an affair. She is informed about the doctor’s driver, who has arrived to give the reports. Rhea tells Aaliya that the reports have come. She goes to collect the reports. Shahana finds Ranbir happy. She is done with the terrace decorations. She asks Ranbir why is he happy. She teases him. She tells that he had to unite with Prachi, they were just fighting.

Rhea collides with Ranbir. She misses to reach the driver. Ranbir meets the driver. Driver tells that the doctor has sent the reports for Rhea. Ranbir takes the reports and asks him to have food before leaving. He thinks its Prachi’s reports and he should check it once. Rhea asks the driver about the reports. Driver tells that he has given it to Ranbir. Rhea panics seeing Ranbir with the reports. She pushes Ranbir to get the reports. The reports get away from her. Ranbir cares for Rhea. She looks for the reports. The reports are picked by some staff person. Prachi is excited for her meeting with Ranbir. Siddharth is happy seeing her wide smile. He tells that he will meet everyone but not so soon. He asks Prachi to keep his visit a secret. She promises him that she won’t tell anyone. She feels glad to meet him. Siddharth makes a leave.

Reviewed Rating for Kumkum Bhagya 3rd March 2022 Written Update Unexpected twist: 3/5 This rating is solely based on the opinion of the writer. You may post your own take on the show in the comment section below.