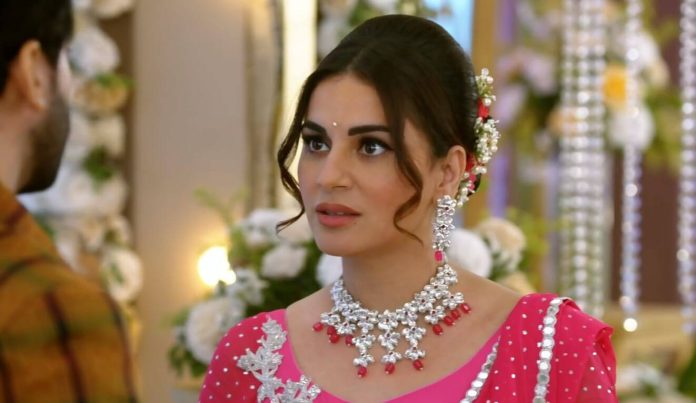 Kundali Bhagya 3rd March 2022 Written Update Preeran rocks Kritika asks Prithvi to get determined to answer Preeta. She tells that next time, whenever Preeta does a mistake, then Prithvi will not sit quiet and give her an answer. She tells that she is with him. she encourages him. She tells that she will not let Preeta humiliate Prithvi. He is glad to have Kritika on her side. Preeta throws an amazing party to celebrate Mahesh’s birthday. Everyone gets dressed in filmi costumes according to the Bollywood retro theme. Preeta and Karan get into their retro looks. Karan romances her, while she falls over him while helping him wear the coat. He kisses her with love.

Preeta holds her cheek in disbelief. She is trying hard to keep Karan away, but Karan doesn’t listen to her. They share a romantic moment. He finds her getting tensed in shyness. He jokes that he will tell everyone whatever happened between them. She tells that she isn’t scared, she will lie to them and make a funny story. She adds that she didn’t feel afraid. He asks her if she is saying it for real. She turns happy after receiving his kiss. Preeta tells that they shall go and welcome the guests. Karan and Preeta attend the guests, hoping that Mahesh’s birthday party is a success.

Naagre is also invited in the party. Prithvi finds Naagre talking to Preeta, and tries to overhear them. Naagre tells that Preeta knows very well why he is working for her. She answers that if he doesn’t work for her, then she will tell his truth to everyone. She threatens of getting him punished by the law if he dares to end their deal. Keep reading.

Mahesh tells Rakhi that he isn’t permitted to have sweets. She tells that she won’t scold him, because its his birthday, he can have sweets. Karan gets happy seeing Mahesh behaving normal like before. Rakhi wishes Mahesh on his birthday. Mahesh asks her to be happy and never cry. He wipes her tears. Prithvi tells Kritika that Preeta made him fall on the staircase, just to prove that he is also mentally ill like Mahesh. He tells that he is doing everything for Mahesh and family’s betterment, he was keeping Mahesh in the basement to stop him from attacking anyone. He makes Kritika against Preeta. He tells that Rakhi forgets Mahesh’s problem because she is Mahesh’s wife, but Preeta does such things just to prove him wrong.

He tells that Preeta can do anything against him. He knows that Preeta is behind his fall. He adds that he respects Preeta because she is the house owner, but he will not tolerate if she does anything wrong again. Kritika asks him to calm down. She encourages him to answer Preeta back, she didn’t interfere because he had a history with Preeta. She doesn’t want to sit quiet when its about Mahesh. She agrees with him. She feels Rakhi doesn’t know right and wrong, but he knows it and he should fix things. She tells that the family will support him. He thanks her for the support.

Karan finds Preeta busy with the decorations. He goes to give her a flower. He gets tensed and fixes it in his own hair. She smiles seeing this. She takes the flower from him. He tells that he has to say something to her. She asks him to come out of his confusion mode. She knows that he wants to say thanks to her. He thanks her. She tells that he wants others to say sorry and thanks, but he can never say it. She asks how did he thank her today. He tells that he had to say thanks because she has brought Mahesh out of the basement. She tells that she had promised him before, that she will get Mahesh out of the basement. He tells that Rakhi is emotional, she wants a birthday party for Mahesh, but he isn’t sure how will Mahesh behave in front of the guests.

Preeta wants to prove Mahesh mentally stable. She can’t tell him that the party will be a turning point in Mahesh’s life. She has prepared well and called the judge and doctor to declare Mahesh normal. He tells that they should not celebrate the birthday. She understands his point of view. She tells that he can talk to the family and tell her their decision. She asserts that Rakhi wanted to throw a birthday party, it will be a big loss if they cancel the party. She wants to keep Rakhi’s heart. She asks Karan to talk to Rakhi first. Rakhi gets upset with Karan. Shrishti meets the lawyer. She tells that they have to invite the judge to Mahesh’s birthday party, the judge can meet Mahesh and then declare him mentally fine.

She requests him to try once. He tells that he will try to convince the judge. She thanks him. Naagre meets the same lawyer. He finds Shrishti leaving. Naagre asks about Shrishti. He tells that Shrishti is Karan’s sister-in-law. Lawyer tells that Shrishti wants him to bring the judge to Mahesh’s birthday party. Naagre wonders what’s happening. He hopes Prithvi knows everything in advance. Karan asks Rakhi to understand him. Rakhi tells that Preeta didn’t come back for the sake of money. She regards Preeta a daughter. She reminds him whatever Preeta did for them. She shows her belief on Preeta.

Preeta happily helps Shrishti with the party outfit. She tells that the judge will come in the party, he will see Mahesh normal and happy, then she will ask the judge to certify Mahesh normal. She gets hopeful. She doesn’t want Prithvi to get another nurse to torture Mahesh. She wants to protect Mahesh from the enemies. Biji blesses her. Preeta makes her proud. Biji wishes that the house gets the real owner back. Prithvi dresses as Gabbar. He makes a drink for himself. He sees Preeta’s stunning retro look for the party. He gets his eyes on her. He thinks why did Preeta deck up and come to celebrate with the Luthras. He doesn’t know what is she planning to do.

Reviewed Rating for Kundali Bhagya 3rd March 2022 Written Update Preeran rocks: 5/5 This rating is solely based on the opinion of the writer. You may post your own take on the show in the comment section below.