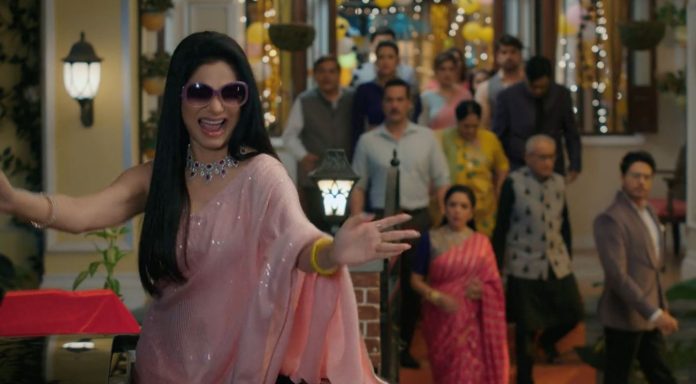 Anupama 3rd March 2022 Written Update Rakhi returns Vanraj asks why Anupama and her boyfriend didn’t return till now. At the same time Anupama and Anuj return. Anupama says they went to get sweets as such big good news came in the house. She gives sweets to Baa and tells her that she bought Makhana too. Anupama starts leaving to make kheer but Kinjal stops her. Kinjal thanks Anupama and also apologizes to her because her birthday party stopped in the middle because of her. Anupama tells Kinjal Birthday’s come every year but the good news she gave her doesn’t come every year.

Kinjal still apologizes to Anupama. Baa asks Kinjal why she is feeling bad. She also asks her if any grandmother looks good celebrating her birthday. Baa says grandmother’s happiness should be in her grandchildren’s happiness and nothing else. Everyone except Baa, Vanraj, Kavya and Paritosh feels irritated and disgusted with Baa’s thinking. She says grandmother’s only do venerations and pilgrimage. Mamaji says grand grandmother means fake teeth, old and ICU. Baa shuts Mamaji. Bapuji explains to Baa that any woman’s existence isn’t based on one relation. He also explains to Baa that the same actress performs different roles in different movies.

Bapuji says sometimes an actress portrays a devotional woman, a housewife, a sixteen year old innocent lover. Bapuji explains to Baa that in real life too, a woman plays different roles in every stage of her life like a heroine. He also explains to Baa that though she is a devotional grandmother at present, she gets shy like a 16 year old girl when he praises her beauty. Mamaji calls Bapuji romantic. Bapuji tells Baa that a grandmother never gets shy but a 16 year old girl in her gets shy. He explains to Baa that if Anupama is going to become a grandmother doesn’t mean that only this label will become her identity. Bapuji says his daughter Anupama is a grandmother, mother and an innocent young girl too. Baa, Vanraj and Paritosh don’t like and understand Bapuji’s words.

Bapuji says Anupama will fall in love and celebrate her birthday too. Samar and everyone else surprise Anupama with a 45 dishes thali on her 45th birthday. Anupama gets overwhelmed seeing it. Mamaji jokes again. Anupama one by one recognizes which dish is made by whom. She thanks everyone individually and collectively too. Anupama also thanks Anuj for bringing her favorite sweets and tamarind. Anuj feels happy as Anupama guessed everything right. Bapuji tells Anupama that they tried to do something unique as they cut the cake already past midnight. Samar says this day and this birthday of Anupama is unique. He also says that be it anyone’s or Anupama’s own birthday, Anupama either used to be in the kitchen or serving food only.

Samar asks everyone to pick up any album, Anupama doesn’t have any photograph partying, dancing or playing games. He says Anupama’s photograph would be only of cooking or serving the food. Samar tells everyone that Anupama was happy but not involved in happiness. He says Anupama didn’t use to get time as she always remained busy in household and kitchen work. Anupama gets emotional and hugs Samar. Vanraj, Baa, Paritosh and Kavya feel irritated. Samar makes Anupama sit at the dining table and makes her taste all 45 dishes. Anupama starts eating, everyone claps and wishes her Happy Birthday. After the first bite, Anupama makes everyone else eat too.

Anupama gives tamarind to Anuj brought by him. They recall their past memories related to tamarind. Vanraj gets jealous and angry seeing Anuj and Anupama happy, while Bapuji feels happy. Everyone takes a selfie in which Baa, Vanraj and Kavya are seen standing aside and unhappy. Later, Vanraj blocks Anupama’s way. Anupama asks Vanraj if he came to taunt her again. She asks Vanraj if he doesn’t always think what taunt should he give her. Anupama tells Vanraj that he always thinks about ways to taunt her and comes to her with enough topics ready to taunt her. Vanraj asks Anupama if she thinks that he wastes his time to think about her. He tells Anupama that he didn’t come to taunt her.

Anuj feels a little jealous seeing Anupama talking to Vanraj but controls his jealousy. Vanraj tells Anupama that men are like kids and take time to become responsible or understand their responsibility. He says men get scared on knowing that they are going to become a father thinking that they would have to prioritize their kid over themselves. Vanraj says he will make Paritosh understand everything. Baa tells Kinjal that she won’t go to the office from the next day. Kinjal gets shocked and tells Baa that she can’t stop going to the office. Baa asks Kinjal if her petty job is more important to her than the future of their family. She tells Kinjal that Dolly took one year long leave when she was pregnant with Meenu.

Dolly says she took leave because her pregnancy was complicated. Anupama reminds Baa that she didn’t stop doing household chores even when she became a mother three times. She says in old times pregnant women used to work at house, farms and grounds even in the 9th month of their pregnancy. Anupama also says that pregnancy is not a disease. She further says doctor’s these days also ask pregnant women to do exercise. When Baa still shows reluctance, Anupama reminds Baa that she too used to work in her pregnancy. She asks Baa to let Kinal do her job. Anupama says Kinjal will take leave whenever she will feel tired. She also says that it should be Kinal’s decision as it’s her body. Baa leaves and doesn’t get convinced with Anupama.

Anupama asks Kinjal if she told Rakhi about her pregnancy as it’s her right to know. Kinjal says no and reminds Anupama about Shahs and Rakhi’s last fight. Flashback shows Anupama telling Rakhi that she won’t come to meet Kinjal at Shah house nor Kinjal will meet her at her (Rakhi’s) house. Anupama tells Kinal that the fight is between her and Rakhi but no fight, conflicts or misunderstanding can come in between the relationship of a mother and daughter. She explains to Kinjal that Rakhi has the right to her sadness as well as happiness. Kinjal calls Rakhi a “Drama Queen”. Anupama politely scolds Kinjal for talking rudely about her own mother. She tells Kinjal that everyone is proud of her how she kept her in-laws respect in front of her mother.

Anupama explains to Kinjal the meaning and importance of motherland (Maayka). She tells Kinjal that a woman should never break her connection with her mother and her parents’ house. Kinjal understands Anupama’s perspective. She says she will call Rakhi. Anupama asks Kinjal to not worry about any fight as it’s her and Rakhi’s relationship. Meeni gives Baa a gift that came for her. Bapuji asks Baa if she has another lover apart from him. Baa shuts down Bapuji. Kinjal, Anupama and Vanraj notice the sadness and worry in Paritosh’s eyes. Vanraj signs Anupama that he will handle Paritosh. Anuj is seen talking on call aside.

Everyone screams seeing a fake snake inside Baa’s gift. The Band-Baaja sound can be heard. Everyone goes outside to see who it is. Everyone gets shocked seeing Rakhi dancing with Band-Baaja, except Mamaji. In the next episode, Kinjal will hug Rakhi with teary eyes. Rakhi will tell Kinjal that she came to take her. She will ward off the evil eye from Kinjal by rotating money over her head. Rakhi will say that Rakhi Dave’s grandson will take birth in a mansion, not in a lower middle class neighborhood. Rakhi’s words will shock and anger everyone.

Reviewed Rating for Anupama 3rd March 2022 Written Update Rakhi returns: 3/5 This rating is solely based on the opinion of the writer. You may post your own take on the show in the comment section below.